After the first week of 2017, the biotech sector rose 7% and the technology sector was up 2%.

During the same week, the retail industry was down 1% along with the energy sector. Retail closed 2017 up only 2% while energy finished down 4%. (See chart below.) 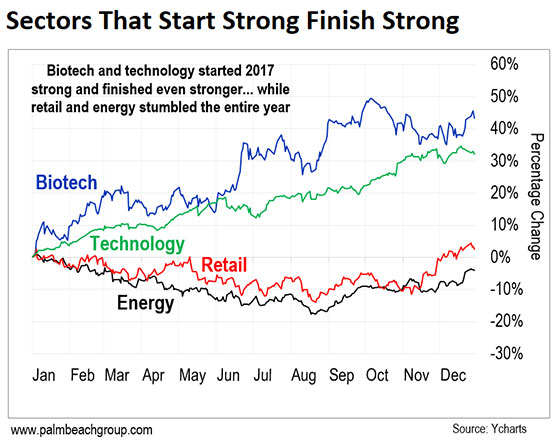 Biotech had a terrible start that year… plummeting 14%. And the sector was flat the rest of the year… Meanwhile, the market was up 11%.

The best performer during the first week of 2016 was utilities. It finished the year up 15%—a big move for the slow-moving sector.

We call this phenomenon the “January Effect.”

This isn’t just an old market tale, either…

According to Jeff Hirsch, editor of the Stock Trader’s Almanac, that means there’s now an 83.7% chance that equities will rise for the year. He added that the indicator has correctly predicted the S&P 500’s annual direction in all but seven years since 1950.

Investment firm Standard & Poor’s also studied the January Effect over the past 90 years. And it found that when a stock was up in January, it finished the year in the green 73% of the time.

As you can see, the first week of trading is the most important week of the year. It’s a sign of what’s to come.

Today, I’ll show you five sectors that started off 2018 in the green. You’ll want to make space for them in your portfolio.

The first week of 2018 is behind us and now we can make predictions for the rest of the year.

Here are the five that will get the biggest boost from the January Effect.

Both sectors rose over 5% during the first week of the year… and they should have a good year again. Strong sectors often stay strong.

(In fact, I’ve been bullish on both sectors since last year. You can read what I wrote in 2017 about biotech here and semiconductors here.)

The easiest way to take advantage of these sectors is the SPDR S&P Biotech ETF (XBI) and the VanEck Vectors Semiconductor ETF (SMH).

This sector started the year off hot. It was up 3.5% during the first week of the year.

Powered by a strong economy, I think this is the year we’ll see commodities break out. Commodities have been beaten down the past seven years. But based on the January Effect, that looks like it will change.

The easiest way to take advantage of this sector is the SPDR S&P Metals and Mining ETF (XME). This ETF ripped 20% higher in December and continued its run in January, rising 3.5% during the first week of 2018.

MLPs are energy companies. Most of them transport oil through pipelines.

The JPMorgan Alerian MLP Index ETN (AMJ) tracks this sector. It broke out of a downtrend in December and shot 4.5% higher the first week of January.

Lastly, Chinese stocks caught my attention. The iShares China Large-Cap ETF (FXI) rose 5% and broke out to new multi-year highs in the first week of January.

Right now, we’re repositioning our portfolio to take advantage of these five trends. And that’s where we’re going to concentrate a lot of our research during the first part of this year. I suggest you do, too.

To recap, here are the five sectors I expect to do well and the simplest way to play them.

P.S. The two weakest sectors so far are utilities and consumer staples. These companies often lag during strong bull markets… And it doesn’t look like 2018 will be any different. If there’s a sector you’d like us to look into this year, click here to let us know.

Tesla Falls After Model 3 Delays: Electric carmaker Tesla had ambitious production targets in 2017. We told you in August that they wouldn’t meet them. And we were right…

Last week, Tesla reported that it made barely half of the Model 3 cars the company had projected. And in the fourth quarter of 2017, Tesla sold only 1,550 Model 3s versus a projected 2,900. Word is slowly getting out… And it will be a headwind for the stock. Since August, Tesla’s up only 2%, while the overall market rose 11%.

Regular readers know our goal in the Daily is to help you make money. But we don’t want you to lose money, either. That’s why you should avoid all the hype around Tesla.

Fed Rate Raise on the Horizon: Fewer topics are more boring than interest rates. But rates will be one of the most important stories of 2018. Palm Beach Letter editor Teeka Tiwari warned about rising rates during an interview with me last week. Now word comes that most Fed officials want to gradually raise rates this year.

According to recently released minutes from the Federal Open Market Committee’s December 12–13 meeting in Washington, D.C., officials reiterated support for “continuing a gradual approach to raising the target range” for the benchmark policy rate. Last week, Teeka told me that rising rates could be the speed bump that slows down the current bull market. Is it time to sell? Teeka says not yet. Read the interview to find out why.

The Cheapest Place to Mine Bitcoin Revealed: Our readers have made life-changing gains buying bitcoin. The cryptocurrency is up 3,863% since we added it to our portfolio in April 2016. But you can also make money by mining bitcoin.

If you don’t have sophisticated computing equipment, then mining most likely isn’t for you. Mining uses a lot of computing power, which eats up a lot of electricity. But if you are interested in mining, a study by Crescent Electric shows how much it costs to mine bitcoin in every state, based on average electricity rate. The cheapest state to mine bitcoin: Louisiana.

The study includes a map that shows the cost to mine bitcoin by state (based on electricity rate). Click here to see it…

Tonight at 8 p.m. ET, legendary speculator Doug Casey will reveal how he became a marijuana millionaire with just one penny pot stock. And he’s inviting Palm Beach Daily readers to join him for this free event…

What’s more, he and the Casey Research team will share their research on five pot stocks set to soar in 2018.

If you want to learn how to become a marijuana millionaire in 2018… you’re invited to attend. The event is free, but you must reserve your spot right here. 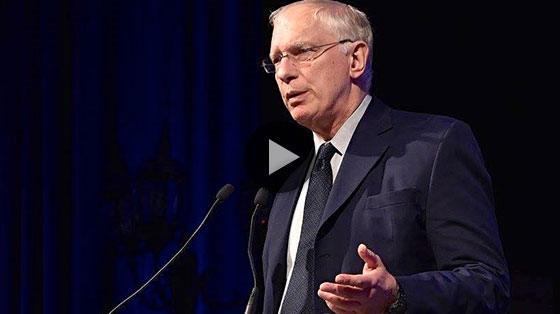