It’s made investors nervous. My phone has been going crazy with people asking, “Why now?” and “What should I do?”

Usually I don’t spend too much time getting into why the market is falling. Often, it’s more constructive to look forward and figure out what the best investment will be.

President Trump is getting things done.

I’m not here to comment on whether these things are good or bad… just that Trump is starting to use his presidential powers to their fullest extent.

Now, Trump was fairly predictable during his first year. Wall Street liked that. No changes meant investors had more certainty. They were able to predict future profits and were willing to pay a premium for that predictability.

Predictability Is Gone, Volatility Is Back

Within the past couple weeks, Trump seems to have gotten more comfortable in the Oval Office.

He’s cleaned house and hired people who agree with him.

And he’s doing things the president can do without congressional approval—like initiating $50 billion worth of tariffs against Chinese goods.

These unilateral moves have Wall Street worried. That’s why you’re seeing the market sell off. And it’s why volatility is back—the Volatility Index (VIX) is back above 20.

We were spoiled the past couple years with record-low volatility. The market slowly marched higher. We didn’t see any major pullbacks.

With the exception of January 2016, we’ve had seven years of slow moves higher. But we’re going to see some volatility now. We need to get used to that and use it to our advantage.

Do Not “Panic Sell”

On Friday, the S&P 500 closed exactly where it bottomed in early February. And it closed right on its 200-day moving average. Those are two major support levels. 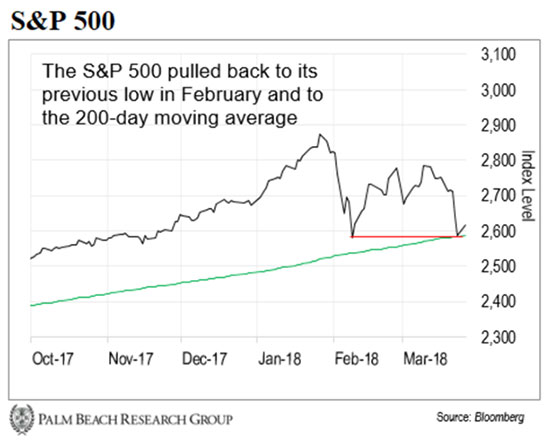 That’s why the market jumped on Monday. Wall Street looks at these support levels… So we should expect a bounce.

I called for a double-bottom a couple weeks ago. And it’s here (admittedly, after the Nasdaq jumped higher than I thought it would).

Do not panic sell. Stick to your plan. Know when you’re going to exit… and don’t let emotions trick you into selling.

Remember, the market is still in an uptrend… and the economy is still strong. Unemployment is still low. Manufacturers are still planning more projects. And GDP is projected to grow over 3% this year.

We are not witnessing systemic weakness yet. But as I said above, we can use this recent volatility to our advantage…

Market leaders are the strongest companies in the biggest growing markets. We’re looking for stocks with massive sales, profits, and cash flow growth.

And we can uncover the ones Wall Street is looking for during declines like we’re seeing now. That’s because these stocks will be making higher lows and outperforming the market.

Most of this run occurred after its last earnings report because profits started to pour in. Revenue was up 32%, but earnings per share grew 210%. And profit margins increased from 2% to 5%. Netflix is becoming a lot more profitable.

But the company also has super high-end software that businesses pay a high monthly fee to use. And they’re raking in sales and profits. Sales grew 25% last year and profits surged 45%. This business also has a ridiculously high (and growing) profit margin of 23%.

All these companies have crushed the market despite the recent pullbacks. And I predict these market leaders will soar as the market resumes its uptrend.

P.S. Buying the market leaders is only a small part of how to protect yourself during volatile times like we’re seeing today. That’s why we just published a brand-new book called the Ultimate Crisis Playbook.

This book will teach you everything you need to know to survive and thrive during a market crash, including buying and selling puts… short selling… and buying the world’s best businesses at deep discounts.

You can access this report for free right here.

We’re looking for someone who eats, sleeps, and breathes micro-cap stocks…

If that sounds like you, read on here… You may have what it takes to join our team as a high-profile investment expert.

Most crypto traders spend their day wondering if the market will rebound. But Jeff Brown, Bonner & Partners’ top technology analyst, hardly even thinks about it.

That’s because Jeff has found a better way to invest in cryptos—by betting on the technology behind bitcoin. See how he does it here. 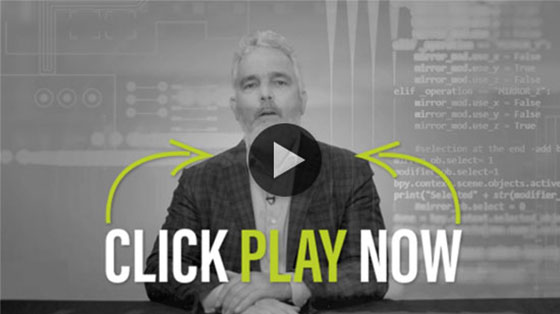