Thanks to extensive research and his network of CEOs and Wall Street insiders, he saw a trend forming in a corner of the market that Main Street often overlooks.

A trend that makes venture capitalists (VCs) and Wall Street millions of dollars year after year… while everyday investors are left fighting over scraps.

I’m talking about initial public offerings (IPOs). That’s when a private company lists on a public exchange like the NYSE or Nasdaq.

At the time of his prediction, IPOs had raised an incredible $65.4 billion in proceeds. And while the overall number of IPOs had fallen versus the year before… Big T and I knew this trend would continue into 2020.

There was pent-up demand for exciting, high-growth private companies. And Wall Street isn’t exactly known to pass up billion-dollar opportunities…

It was a record year for IPOs. At the close of 2020, 480 companies went public, raising roughly $175 billion in proceeds. And this year could be even bigger.

But there’s a kind of IPO that we believe will do even better this year. It’s a backdoor way for investors to make life-changing gains before a company goes public.

A Different Way to Go Public

These IPOs got plenty of fanfare. They shot up as much as 882%, 555%, and 395%. Except, they weren’t traditional IPOs. They went public via a SPAC – the special type of IPO I mentioned above.

These shell companies go public and raise money for the sole purpose of acquiring an attractive private company with explosive upside, taking it public in the process.

While they’ve been around for decades, SPACs aren’t nearly as well-known as traditional IPOs – mature companies that have private investors looking for exits.

SPACs, on the other hand, target companies in the earlier stages of their growth cycles. That means they have even more upside potential.

Plus, the IPO process is expensive. Underwriters, regulators, accountants, attorneys, and exchanges all collect fees. All in, the pricing process has cost about 7% or more of total funds raised for traditional IPOs. And the process can drag on for 6–12 months – or longer.

In contrast, the SPAC process can take as little as 3−4 months. And the expenses average 3−4% of total funds raised. That’s about half the cost of a traditional IPO.

Plus, the private company negotiates an exact acquisition price. It doesn’t leave any money on the table.

This SPAC route has opened the door for private companies that haven’t been large or well-known enough to tap public markets in previous years. And without a doubt, 2020 was the year of the SPAC. 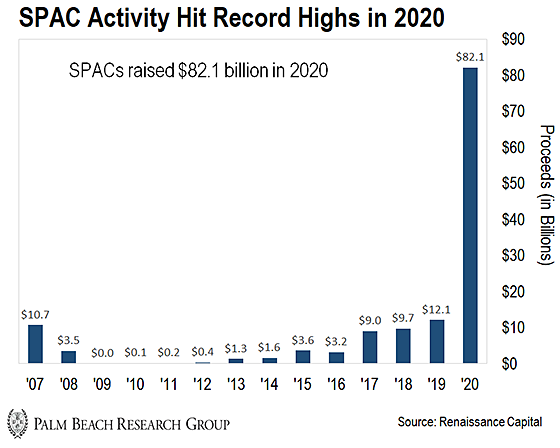 As you can see in the chart, 168 SPACs raised over $82 billion in 2020. That’s 3x the number of SPACs − and almost 6x the proceeds – than 2019. Drilling down deeper, they’ve raised more proceeds this year than the last 13 years combined.

The SPAC-IPO Boom Is Just Getting Started

Based on our research, nearly 300 SPACs are hunting out targets in hot sectors like technology and electric vehicles this year. And billions of dollars will flow into these deals in the coming months.

Look, the reality is mom-and-pop investors don’t have easy access to pre-IPO deals. You have to be a celebrity, a top hedge fund manager, or part of the Wall Street elite to get an allocation to a private company before its IPO.

Or you’d need to do tons of research on your own and build your own network of insiders to find the best pre-IPO deals. (That’s what Big T and I do on your behalf in our pre-IPO service, Palm Beach Venture. Click here to learn more.)

However, SPACs give Main Street investors backdoor exposure to the pre-IPO market… and they don’t require you to be a millionaire or well-connected insider. Consider adding them to your investment radar today.

If you’re not a PBL subscriber, click here to how to become one. You’ll also see why we call Big T America’s No. 1 investor – and find out the new technology he believes will become the biggest moneymaking opportunity in the 2020s…