It sounds like the origin story for a superhero movie, but it’s not. These aren’t heirs to the Rockefeller, Johnson, Du Pont, or any other elite family fortune.

This batch of millennials was randomly picked to carry on one of the most recognizable funds in the investing world… a financial instrument that would grow from humble beginnings to dominate the 2000s.

At the time, most mutual funds were compared against the S&P 500 top U.S. companies. The problem was, after a half-century in print, few fund managers had been able to outperform the index over any length of time.

That was until investing mavens Steven Bloom and Nate Most came up with a clever idea… They decided that if they couldn’t beat the S&P 500, they’d copy it.

This was a prototype of the now common exchange-traded fund (ETF). But at the time, the SPY ETF was the first of its kind – and the rulebook was still being written. That’s why they originally formed it as a trust.

Unfortunately, trusts can’t run on forever… They need to be put into someone’s name. And once that person dies, the clock starts ticking on its expiration date.

Bloom and Most wanted to build something that was enduring.

Their colleagues had already burned through decades of their life expectancy, so they put out a call for clients with a newborn to list them on the trust. With the birth of those 11 babies came an entirely new asset class: ETFs.

Bloom and Most, and the families of those 11 babies had no idea they were creating an asset class that would be worth trillions of dollars in less than 30 years.

But as we now know, ETFs were the biggest thing to happen on Wall Street in the 2000s…

There are now over $4.4 trillion in ETF assets in the U.S. alone. They rake in roughly $86 billion per year in fees. And early investors in ETFs have gone on to make fortunes as the markets have risen higher over time.

While the biggest gains in ETFs are in the rearview… another asset class has come to dominate the imagination of the investing world.

And like ETFs, it has matured from its humble and checkered beginnings into a force to be reckoned with.

A Different Way to Go Public

These initial public offerings (IPOs) got plenty of fanfare. They shot up as much as 882%, 555%, and 287%. Except, they weren’t traditional IPOs. They went public via a SPAC.

These shell companies go public and raise money for the sole purpose of acquiring an attractive private company with explosive upside, taking it public in the process.

Investors are betting management will deliver on its promise to find a compelling target and take it public by merger.

While they’ve been around for decades, SPACs aren’t nearly as well-known as traditional IPOs. Traditional IPOs are for more mature companies that have private investors who are looking for exits. SPACs, on the other hand, target companies in the earlier stages of their growth cycles. That means they have even more upside potential than IPOs.

Plus, the IPO process is expensive. Underwriters, regulators, accountants, attorneys, exchanges, and printing companies all collect fees. All in, the pricing process has cost about 7% of total funds raised for traditional IPOs. And the process can drag on for 6-12 months – or longer.

In contrast, the SPAC process can take as little as 3−4 months. And the underwriting commissions, legal fees, and operating expenses average 3−4% of total funds raised. That’s about half the cost of a traditional IPO, and the private company negotiates an exact acquisition price. It doesn’t leave any money on the table.

This SPAC route has opened the door for private companies that haven’t been large or well-known enough to tap public markets in previous years. And without a doubt, 2020 has become the year of the SPAC. 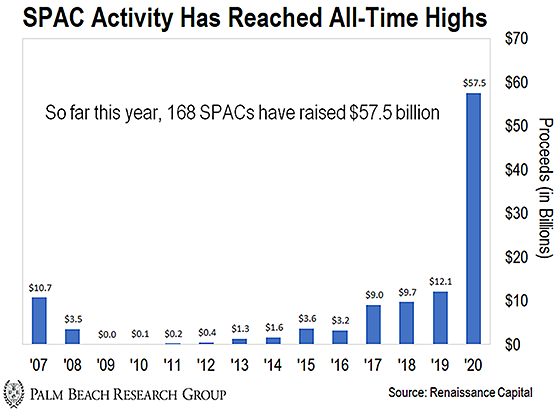 As you can see in the chart, 168 SPACs have raised over $57 billion this year. That’s 3x the number of SPACs − and almost 5x the proceeds − from last year. Drilling down deeper… They’ve raised more proceeds this year than the last 13 years combined.

SPACs have been on fire in 2020. You can’t read through a day’s worth of financial news without hearing about one SPAC move or another.

And we expect even more SPAC activity in 2021…

Expect More from SPACs in 2021

The SPAC phenomenon is reshaping the path for disruptive, high-growth private companies to hit the public markets in a big way.

And the market is saying it wants SPACs…

And retail investors are diving in, too. Some of the most widely-owned securities on Robinhood are SPACs and SPAC-derived companies.

These are indicators that SPACs aren’t just a fad. They’re here to stay.

The reality is mom and pop investors don’t have easy access to pre-IPO deals. You have to be a celebrity, a top hedge fund manager, or part of the Wall Street elite to get an allocation to a private company before its IPO. Or you’d need to do tons of research on your own and build your own network of insiders to find the best pre-IPO deals.

However, SPACs give Main Street investors backdoor exposure to the pre-IPO market… and they don’t require you to be a millionaire or well-connected insider.

Like ETFs, SPACs are becoming a force to be reckoned with. But they offer even greater opportunities for life-changing gains.

Here at PBRG, we look for unique ways to play the most compelling trends… and we expect big things from SPACs in 2021. Consider adding them to your investment radar today.

And as always, we’ll share these incredible opportunities with our readers before anyone else.

P.S. In December, Daily editor Teeka Tiwari and I made our first ever SPAC recommendation in Palm Beach Venture. It’s cashing in on a trend at a price that’s 75% below what the average Main Street investor normally pays.

It’s a technology play put together by a world-class team of business builders. They have found a backdoor way to acquire tech assets at an 80% discount to what California-based venture capitalist firms are paying.

In Palm Beach Venture, we use elite, hedge-fund caliber strategies to find the best private companies in the world. You can learn more about it right here…