[GAAP is a set of common regulatory reporting standards. They cover all key business metrics. This includes data like earnings, profitability, debt, and free cash flow.]

But The Wall Street Journal reports only 29 publicly traded companies use GAAP. No, not 29%… just 29 companies. That means only 5.7% of S&P 500 companies are accounting the correct way… 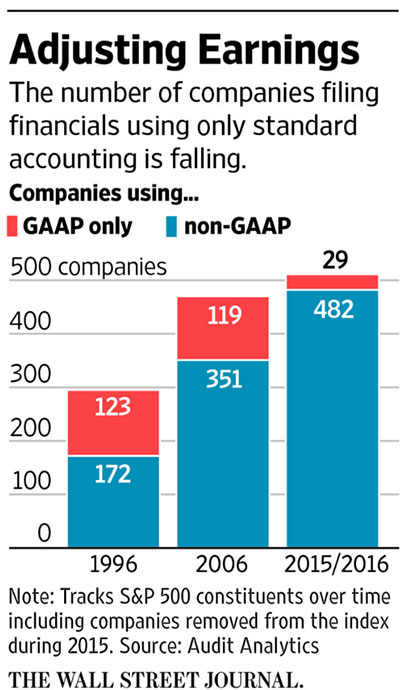 Research provider Calcbench Inc. analyzed the financial results of 816 companies. Here’s what they found in firms that “customized” their accounting results:

Said simply—companies are cooking their books. And that makes conventional business valuation metrics—things like P/E ratios and book value—almost meaningless.

Of course, it’s happened before…

You may recall corporate accounting debacles like Enron, Worldcom, Lehman Brothers, and Tyco. (For a “fun” reminder, click here).

All of these “healthy” companies inflated, misstated, faked, or rigged their income. Here are just two examples…

Longtime Daily readers know the “Wealth Stealers”—frauds like Wall Street’s phony accounting practices—are the landmines of the investment world. They’re just waiting to be stepped on.

That’s why showing you how to steer clear and protect yourself is one of our top priorities. Here’s what Mark wrote about one of the six major Wealth Stealers in action…

Baby boomers will never forget the financial “crisis” of 2008. And they shouldn’t. Tens of millions of people my age were greedily and stupidly duped into losing their homes and retirement savings.

The media like to say that the “crisis” was unprecedented and unpredictable. What a crock of crap. At least a dozen of my colleagues at Agora had been predicting it for years.

You don’t need a Ph.D. in economics to know that the real estate collapse and “banking crisis” were the inevitable results of a scam—a scam that was approved by the government and perpetrated by the banks.

There are many ways to talk about what happened—and most of them are specious. The simplest explanation is also the truest. Big government, big banks, and big brokerages cooperated to provide millions of loans to pump up real estate prices and loan money to people who were not credit worthy.

This brought in billions in tax dollars to the government, fees to the banks, and commissions to the brokerages. Then the banks and brokerages used that extra money to gamble.

(Any time you hear anyone tell you that 2008 was unpredictable, you can be sure that you are listening to a Wealth Stealer.)

Now, we don’t know when the next big Wall Street scam will unravel… but we can be 100% certain it will. That’s why Mark’s made the Wealth Stealers such a vital component of his Wealth Builders Club.

As Mark notes, the first step to building wealth is not to lose the wealth you’ve already accumulated. In 21 insightful Wealth Stealer modules, Mark covers how to protect yourself from everyone from the taxman… to your broker… to even your “trusty” auto mechanic.

It’s sad we live in a world where corruption and deceit is now commonplace. But that doesn’t mean you have to lie down and take it…