On September 18, Toys Toys “R” Us filed for Chapter 11 bankruptcy.

The big-box toy retailer has 1,600 stores across the world. Many of them are still profitable. But the company has so much debt that it can’t pay its bills.

Toys “R” Us has piled up $5 billion in debt since a team of equity firms took it private in 2005. That’s over $3 million per store. The interest payments are suffocating the company.

Toys Toys “R” Us is hardly alone. There’s been a rash of retail bankruptcies this year. Just look at the chart below. 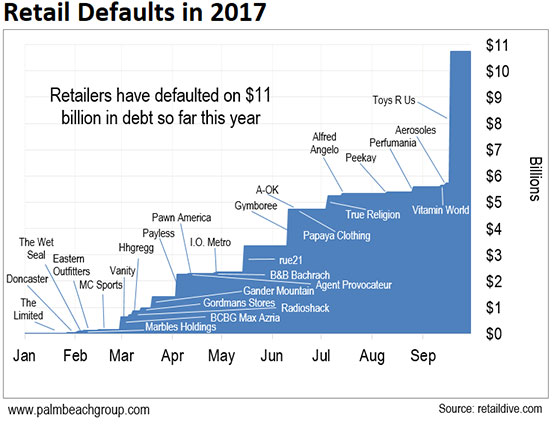 Up until last week, there was about $6 billion in total retailer debt. Toys Toys “R” Us alone added more than $5 billion to the heap.

This rush of bankruptcies has made retail one of the most hated sectors in the market. But among this hate, there are great buying opportunities.

In May, I told you the rise of online shopping platform Amazon was driving traditional brick-and-mortar retailers out of business.

Since the turn of the century, the e-commerce giant has been pushing traditional retailers towards extinction with its ultra-low prices.

Circuit City and Borders were some of the first victims. Mall stalwarts like JCPenney, Sears, and Macy’s may be next.

We call his phenomenon getting “Amazon’d.” Others call it the “retail apocalypse.”

No matter what you call it, weak retailers are losing money. And Amazon is exposing them.

To be honest, the U.S. probably has too many stores, malls, and shopping centers. More will fail.

Credit rating agency Moody’s recently said retailers such as J. Crew, the 99 Cents Only Stores, and Claire’s could declare bankruptcy by year’s end.

But that shouldn’t scare you away from all retailers. Some of them will continue to thrive…

Online sales only make up 5-10% of all retail purchases in the U.S. That means physical stores still account for over 90% of all purchases.

At risk of sounding old-fashioned, there’ll always be a need for brick-and-mortar stores.

Some people still want to try on clothes before they purchase them. And not everyone wants to wait a day or two (or more) for deliveries.

Even though the vast majority of people shop at brick-and-mortar stores… retail stocks are priced as if bankruptcy is near.

Since its peak in December 2016, the entire sector is down 20%. This fall has dragged down good companies with the bad. 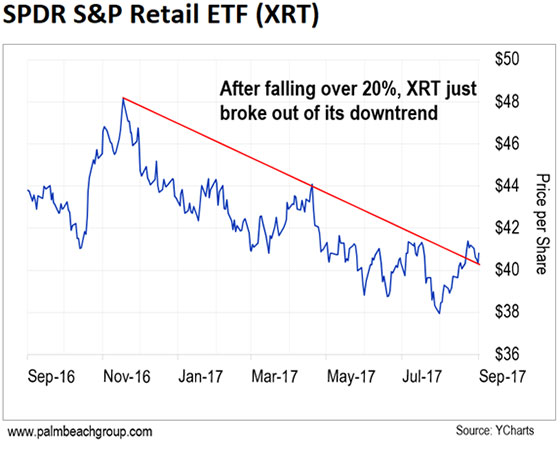 Now that retail appears to be starting a new uptrend, it’s time to buy this undervalued sector.

The one-click way to buy retail is to buy XRT. But then you get the good companies with the bad.

If you want to own some quality individual names, check out our Elite 25 portfolio.

For those unfamiliar with the Elite 25, it consists of the most profitable and growing companies in the world. (You can learn more about the Elite 25 right here.)

Here is a list of retailers in the Elite 25 and their price-to-earnings (P/E) ratios. (The P/E ratio is how much investors are willing to pay for every dollar of current earnings.)

These companies are trading at a discount to the overall market… and to their own historical averages. And most importantly, they’re still growing.

If you’re looking for value in the market, the retail sector is a good place to start.

I’ve been really nervous over the past two weeks.

You see, I sold out of my gold stock trading positions a couple weeks ago. Ever since then, I’ve been anxiously looking for a spot to get back into the sector.

I like owning gold stocks. I think the sector will be much higher many months from now. And I’m uncomfortable not having any gold positions in my trading portfolio.

Selling out two weeks ago was certainly the right call. The VanEck Vectors Gold Miners ETF (GDX) is down about 8% since then.

Now I’m trying to figure out the best spot at which to get back into the sector. Here’s what I’m looking at…

Take a look at this 60-minute chart of GDX… 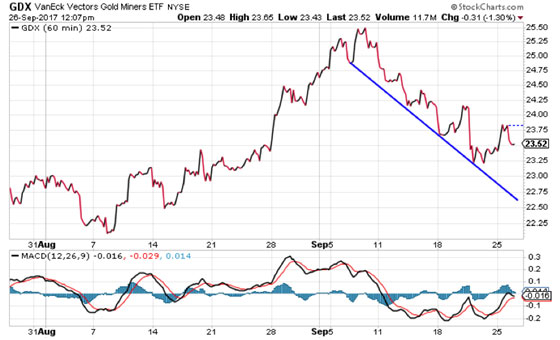 Over the past two weeks, GDX has been making a series of lower highs and lower lows. During that time, the moving average convergence divergence (MACD) momentum indicator has also been declining. And, as GDX dropped to lower lows, the MACD indicator hit lower lows as well. This action confirms the downtrend, and it usually indicates that any bounce will be temporary.

So, it looks to me like there’s still a bit more room for the gold sector to decline from here. Perhaps GDX will make another lower low and decline to the blue support line on the chart at about $22.70.

But, here’s the good thing…

The MACD has bounced back high enough now that if GDX makes a lower low soon, then the MACD indicator will likely make a higher low. This “positive divergence” often occurs before a meaningful reversal. At the very least, it should lead to a tradable bounce in gold stocks.

Since this is a 60-minute chart—where patterns tend to play out within 3–5 days—there’s a chance traders may get a shot at buying back into the gold sector later this week, or early next week.

P.S. My gold stock analyses are only a small part of how I provide my Delta Report subscribers with huge, overnight gains.

Recently, I unveiled my earnings trading algorithm to my readers. It’s a system that predicts—with 90.2% accuracy—winning trades that emerge from the fast stock action of quarterly earnings reports.

Since one of the busiest earnings seasons of the year is right around the corner… be sure to check out my new presentation right now.

If you missed America’s “pot stock mania,” here’s your second chance to become a marijuana millionaire.

This 58¢ pot stock is set to soar on October 31, 2017, when Canada votes to legalize marijuana for the entire country. 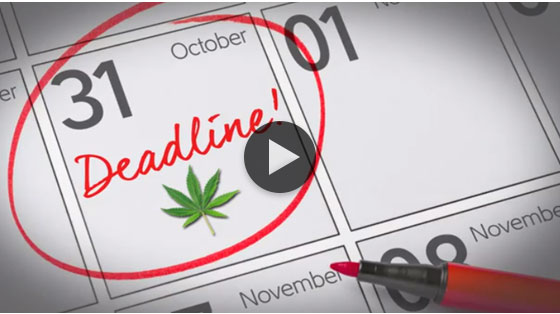