I’m sure he was one of the few people excited about the markets that day.

The day before, the market had its biggest one-day point drop ever. It was complete carnage.

William showed readers a heat map of the activity from the previous day. A heat map gives a quick overview of which individual companies are causing the market to move… And if you see a lot of red, that means it’s a huge down day… 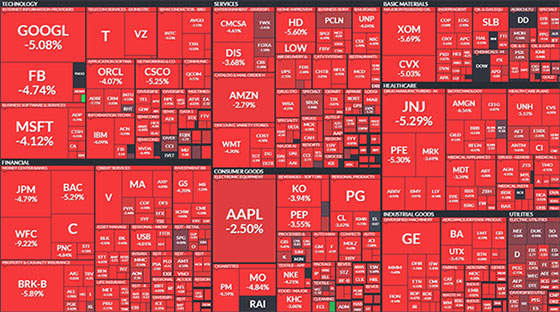 Seeing this makes my stomach drop. It means investors are losing a ton of money.

This much red is rare. Almost nothing was up that day.

But William was excited to see this. That’s because the specific strategy he specializes in suddenly became a whole lot more profitable…

One of the Safest, Most Profitable Strategies in the Market

Now, some people get scared away by options. But you shouldn’t. They’re actually very safe…

You can think of selling put options like being an insurance company.

You see, when you sell a put, you’re essentially insuring against a fall in the company.

Let’s say you sell a $150 put on Apple’s stock. You collect a premium on that contract from the purchaser. And that’s yours to keep no matter what.

You only lose money if Apple closes below $150 by the end of the contract. And with Apple at $164, it’s unlikely that’ll happen.

And that’s the risk of this strategy—you might get “put” the shares of Apple if the price falls. But that’s not necessarily a bad thing. Apple is a high-quality company, and you would have bought it at a significant discount.

Plus, William uses another strategy—selling covered calls—to generate even more income from these high-quality companies.

But today, we’re going to focus on his put-selling strategy—one of the safest ways to make consistent double-digit returns from the market.

To see how powerful this strategy is, we just need to look at William’s track record.

And the average annualized return of his positions is 15.3%—that’s a solid 6% higher than the long-term return of the S&P 500.

One would think he doesn’t like volatility… After all, high volatility usually means the market is going down.

But that’s not how it works for options traders…

When stocks become more volatile, it means the price of options goes up.

And volatility just spiked to multi-year highs—at least according to the commonly used Volatility Index (VIX).

Here’s what William had to say about the VIX in his February 6 trade alert:

For most of 2017—and January of this year—the VIX remained subdued. Investors were complacent as the bull market marched on.

However, yesterday’s carnage pushed an already rough week (or so) of trading deep into the red. In fact, it was the S&P 500’s worst day since 2011, and the market is now negative on the year.

That immediately got my attention because a sharp downside move almost always leads to an explosion in the VIX.

And the VIX did not disappoint: 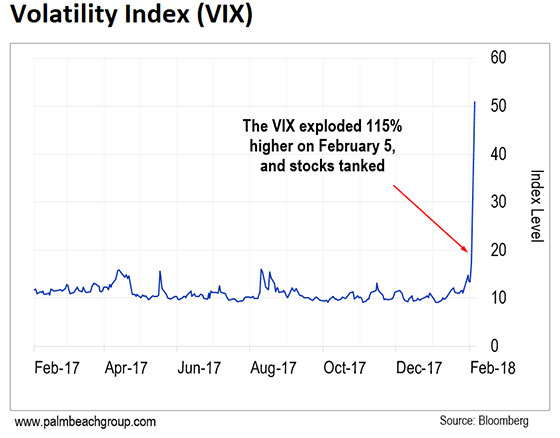 These are the types of days William dreams of at Palm Beach Income.

And the reason is simple… With a 115% increase on February 5, the VIX was trading around 38.25. That’s higher than it’s been in five years… And it was our signal to strike—aggressively.

You see, thanks to the panic in the markets, investors will pay us huge premiums for agreeing to “insure” their shares with our low-ball offers to buy them (selling put options) if they fall further.

And that’s why William was excited. Prices just went up for the puts he’s selling. And he sent out four trades to subscribers where he expected well over 20% annualized gains.

It’s looking like he’ll get that return as well. One option he sold was the $150 put on Apple that I mentioned above. The contract he sold expires on March 16.

So if Apple stays above $150 by the end of March, his subscribers get to keep the juicy premium.

When the alert was sent out, he could sell the option for $4—which will give subscribers a 25.6% annualized return if it expires worthless.

That’s almost twice as much as his average annualized return. And that’s because the increase in volatility caused those put options to go up.

That trade is already paying off. The put contract is selling for only $1, as of this writing.

Remember, this is a good thing. When you sell these puts, you want them to be worthless at the end.

A Great Strategy for Volatile or Choppy Markets

Selling puts is a great way to get extra income out of the markets. As you can see, even if Apple goes nowhere in the next month, Palm Beach Income subscribers will still make that 25% annualized profit.

To capitalize on recent market volatility, consider selling some puts to get some extra income out of the market. Personally, I like selling options and have done so myself… I hope to cash in big on this crazy market.

P.S. Make sure to check your inbox on Monday for a special evening series we’re running in the Daily.

The week-long series will include a free report on nearly two dozen steps you can take to survive and thrive during a market crash, including more about William’s put-selling strategy.

This report is a compilation of the best tips from the gurus across our entire business—so you don’t want to miss it. Tune in Monday morning for more details…

From George S.: I want to crow a little. Palm Beach Income got me started trading options. I was very leery at first but you guys led me through the jitters. I have made serious money following your recommendations.

I also used what I learned in Palm Beach Income to trade options on one of the stocks in your Palm Beach Confidential portfolio. It’s yielded me $17 per share so far and I still have my original position, plus 500 more when the stock went to $45. Options on this stock most always pay a good premium. Thanks.

Have you also profited from William’s option-trading guidance? Let us know how right here…

If you think you missed out on making 20 times your money on Bitcoin last year, don’t worry. Bitcoin mania is just getting started…

As early as April 2, $849 billion is expected to flow into Bitcoin and other cryptocurrencies. And crypto expert Teeka Tiwari thinks these three tiny plays will soar as a result. 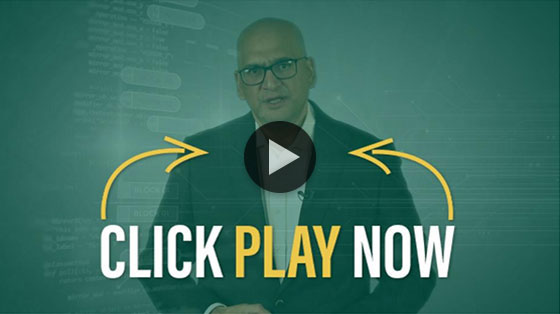