Nick’s Note: In Part I of his classic “The Virtue of Laziness” essay, PBRG co-founder Mark Ford set the scene…

You’re in search of a money-making opportunity that’s feasible, flexible, and profitable. So you take Mark’s advice and start a landscaping side business. But it soon begins to wear on you. The only solution is to hire help… lose some of your profits along the way… but gain a great deal more…

In your landscaping side business, you’ve moved beyond what I call the “self-employment” business stage. You’re ready to hire, train, and manage employees. (In other words, you’re ready to make more money by working less.)

If you’ve read my previous writings, you know that the quality of the person you hire is one of the most important factors in making your growing business successful.

Since you’re landscaping, you need someone willing to do manual labor eight to 10 hours per day. You also need someone pleasant to work with, who will respect your clients.

You ask around at your nine-to-five job. Sally in human resources has a younger brother. You try him out, but he begins calling in with excuses after three Saturdays.

So you try Lou, the brother-in-law of the office receptionist. He sounds great on the phone, but shows up an hour late on the first day, reeking of booze.

You’ve run out of options at work. On a trip to Home Depot, you notice a dozen young men on the far corner. Your Spanish is terrible, but you take a chance.

Alberto, a kid with a wide smile, speaks decent English. He tells you the going rate is $10 per hour. You offer him $12, and he works hard all day—never losing that smile.

You have a new car. You’ve moved into a nicer apartment. And you’re banking money for the future. But between manual work and managing Alberto, you have no time to enjoy your weekends.

“I want to work less because I’m smart, not because I’m lazy,” you say, looking at your tired reflection in the mirror. And then you make a pledge: By hell or high water, you’ll find a way to work no more than eight hours next weekend.

The next morning, you wake up excited. You know just what to do…

It’s breakfast when you put pencil to napkin to crunch some numbers. Starting your own landscaping business and working for yourself was lucrative. By “hiring” affluent customers and being efficient, you were making nearly $50 per hour.

Employing Alberto was a great idea, but it was more expensive than you thought. Accounting and taxes brought his hourly cost to your business up to $20. Still, you were netting an extra $30 for every hour he worked.

Your idea was simple: Instead of working alongside Alberto, you’d hire a second employee to do your job. Instead of netting $3,000, you’d be making $2,000—but you’d have the weekend mostly free!

And what if you hired two more people?

You could start accepting new clients and covering more ground in the same span of hours. The numbers in your calculations start going up instead of down. You’d have some extra work at first, though: posting more flyers, making appointments, etc.

You ask Alberto if he knows two people who are good, reliable workers—two people like him.

Nine months later, your weekend business is no longer a weekend business. You have three two-man crews, each working five days per week. Your gross revenue is approaching $45,000 per month. You’ve had to lease two trucks and three large mowers, and you’re renting a small warehouse to store the equipment. Alberto is now making $20 per hour and his brothers, $15 each.

The good news is you’re personally netting over $100,000, which means you’re living well and banking serious dollars. You can see how, if this continues, you’ll be “sort of rich.”

The bad news is that running a growing business is more complicated than you imagined. There are bills to process, forms to file, legal and tax issues to deal with. Then, there are problem employees and difficult customers.

Once again, you’re working too hard. Your landscaping business is growing bigger and faster than you ever thought it would… and even though you’re now “sort of rich,” the amount of work and attention it requires is eating up more and more of your day.

But you have a solution. So you make a decision to do something you’ve been wanting to do for a long time…

You go into your nine-to-five job and step into your boss’ office. You give him the good news. “I’m firing you,” you say.

You leave the office with a big smile on your face, as big as Alberto’s smile was when you increased his compensation to $20 per hour. Your newfound extra time means you won’t have to work weekends anymore. In fact, you can’t imagine having to work past noon during the week, either.

Yes, you’re giving up the $52,000 your cranky old boss was paying you. But you’re making more than twice that with your landscaping business—which is still growing!

A year later, your business is considerably larger. You now have six three-man crews, and the gross billings are approaching $1 million per year. You’ve hired an office assistant at $40,000 per year and your niece to help with sales part-time. (She’s thrilled to be making $500 for each new customer she signs.)

Other expenses—mostly legal and accounting—have also grown. And you have some new expenses now that you’re giving benefits to your employees.

Still, your net profit is nearly a quarter-million dollars per year. And you’re working less—only four hours a day, five days a week… with your weekends free and clear.

Sipping champagne on the veranda of Hôtel Ritz in Paris one pristine summer evening, you can hardly believe it’s been less than four years since you read that “Extra Income Project” report and decided to spend $23 on flyers.

Your success, you realize, came not so much from the courage to take a risk, because you never risked anything more than $23 and some extra time. Your success came from persistently figuring out how to do less work than you were doing!

You suppose Mark Ford was right when he wrote, “The desire to work less is not a vice, but a fundamental aspect of emotional intelligence. When combined with commitment, persistence, and common sense, it creates economic efficiency, an essential component of building great wealth.”

The only thing left to do, then, is decide what to do with all the wealth you’ve earned…

Nick’s Note: For the first time ever, self-made millionaires and “founding fathers” of the financial publishing industry, Bill Bonner, Doug Casey, and Mark Ford will get together on camera for a candid conversation about investing, the economy, and their business…

In addition, Mark will tell you where he’s investing his own money based on Bill and Doug’s analysis.

Register for free right here… and learn how you can get a rare opportunity to partner with Bill, Doug, and Mark in their latest and greatest venture just for watching… 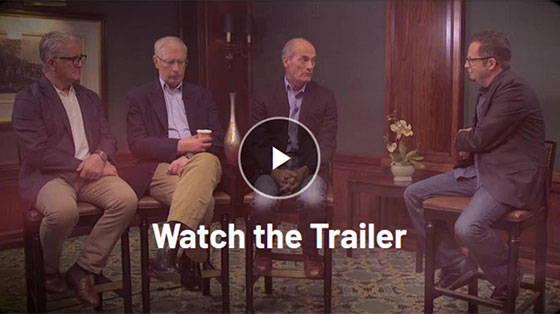