Nick’s Note: The stock market is having its worst year in a decade. As recently as September, the market hit its all-time high. But over the past three months, it’s pulled back 10%—its worst showing since the 2008 financial crisis.

In today’s interview, Jason tells me where he thinks the market is headed next—and what the big money is doing right now…

Nick: The past three months have been very volatile. One week, the market is up 5%… Then, it’s down 5% the next. So what’s going on?

Jason: The media gives us lots of reasons for this volatility: Interest rates are going up… The yield curve is inverting… Earnings growth is slowing next year… There are trade war fears…

The list goes on. And maybe they matter. Maybe not.

Here’s the important thing… What we’re seeing now is a massive sector rotation in the stock market. As investors fear risk in growth sectors, they pull out and head for safety in higher-yielding stocks.

Over the past month, we’ve seen money flee from growth sectors like tech and energy and head to safe-havens like real estate investment trusts [REITs] and utilities.

This transition has been ugly and volatile.

I’ve also noticed a change in market character. Over the past couple of years, everything rose—good and bad stocks alike. We had that massive “Trump Bump” after the 2016 presidential election… and the president’s tax cuts boosted the entire market.

Now, we’re seeing unpredictable daily volatility and a market that’s struggling to find its footing. But when it does find its footing—and I believe it’ll happen soon—we should see a more divergent market…

Nick: Can you tell readers what you mean by a “stock picker’s market”?

Jason: Well, when a bull market is in full throttle, it’s much easier to make money on stocks. Odds are, whatever you pick will go up if the whole market is trending higher.

But when the bull calms down, investors must become more selective. They have to pick companies with attributes that can sustain price appreciation.

In a more selective bull market—a phase I believe we’re heading into—you have to know what you’re doing. You have to pick strong companies and know how to separate the wheat from the chaff.

This type of market will be great for institutional investors—like hedge funds, etc.—that do deep-dive analysis into companies. This kind of research should pay off in a big way. And by extension, that should be great for my Palm Beach Trader portfolio.

I designed my proprietary system to pick up unusual institutional [UI] activity. It often flags great companies as big funds start buying them.

Nick: Do you have any examples?

On September 11, my system flagged UI activity in Starbucks at a price of $54.97 per share. Then, on October 9, we found out that famed hedge fund manager Bill Ackman bought nearly $1 billion worth of shares in the company. That’s a sizable material stake for a company with a market cap of $82 billion.

And the four-week lag between the signal and Ackman’s announcement makes sense, as it takes weeks to build a position of that size—nearly 17 million shares.

A couple of weeks later, Starbucks crushed its earnings report and soared higher. It peaked over 25% since my system flagged it back in September. 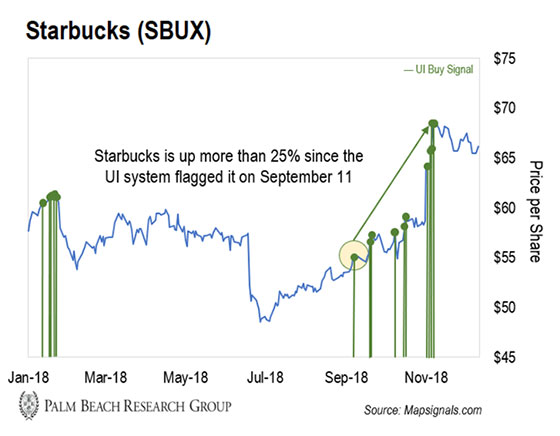 Nick: That’s a huge move for a big company like Starbucks…

But what I really love is finding smaller companies that few people know about. That’s where we can find outsized gains. Has your system flagged any small caps?

Jason: Sure, there have been plenty.

One that stands out happened back in January of this year. My system flagged a small biotech company called Bioverativ. We noticed unusually large buying in the company. And four days later, pharma giant Sanofi announced it was buying Bioverativ—for a 60% premium. 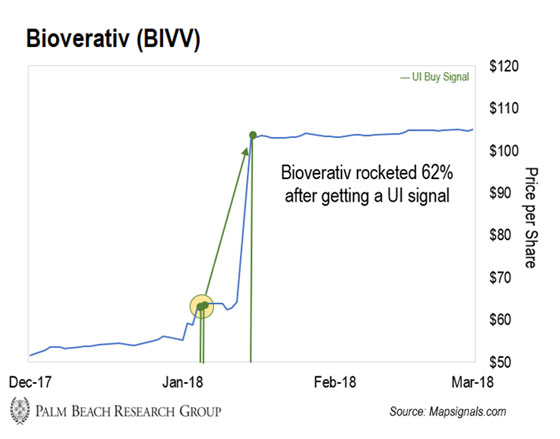 Now, it’s not surprising to see UI buying in takeover stocks. Quite often, when word of these deals leaks, you’ll see weird volume in the equity and options markets.

I didn’t specifically design my system to find buyouts like these… But it’s a happy consequence of having a great system.

Nick: That’s awesome. If we could always find stocks like that, it wouldn’t matter what the overall market does…

On that note, are you still bullish?

Jason: Yes. And here’s why…

We’re just experiencing a little pause in a bull market right now. It feels like a huge drawdown, but if you were to look at a chart of the S&P 500 from the bottom of the bear market in 2009 to now, this pullback would barely register as a blip in that chart.

It’s very minor in the grand scheme of the market. And my data says we’re going higher.

Part of my system looks at nearly 5,500 stocks every day. It then takes all the ones with UI buying and divides them by the stocks with UI selling to create a ratio.

In my experience, we only see UI selling for a short time. The sellers exhaust themselves, and buyers typically come in and move the price up.

The ratio indicates that sellers have just about exhausted themselves. The underlying market data is showing that—on a single-stock level—things are starting to firm up.

On this last bounce, we started seeing signs of institutional buying. So the big money is slowly moving back into the market.

Jason: As I mentioned, we’re likely seeing institutional buying in REITs and utilities.

That’s where most of the activity is right now. But when the market does firm up, I’ll be watching where the money moves in preparation of the next leg up.

Nick: Great. Thanks for sharing where the big money is going right now. Take care.

Jason: As always, my pleasure.

Nick’s Note: If you have a question for Jason or any of our editors, send them to us right here…

Last week, thousands of readers tuned in to watch him announce his latest venture and give his 2019 crypto forecast.

During the event, Teeka told viewers why he’s still bullish on the industry. If you missed it be sure to catch up here… 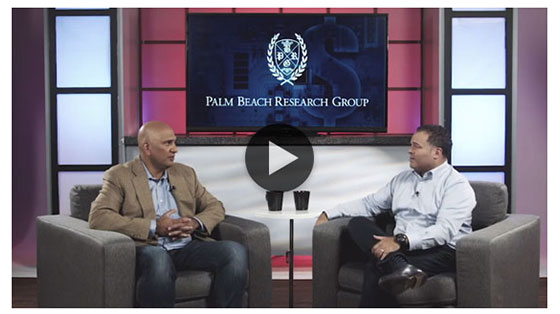