On September 28, we told you the retail apocalypse was over.

We said that there’s no way all brick-and-mortar retailers were going bankrupt. And that the selling was overdone.

Less than a week later, some of the world’s richest investors started following our advice.

How do we know that?

Well, hedge funds just had to unveil their holdings. At the end of every quarter, all hedge funds with over $100 million in assets need to file what’s called a 13F report with the Securities and Exchange Commission (SEC). And the SEC makes these reports public each quarter.

I always make sure to pay close attention when these reports come out. They tell you what the world’s most successful investors are actually doing with their money. And we’ve taken full advantage of this strategy here at the Daily…

Last March, we saw that hedge funds were moving money into financials.

Anyone who followed them into financials and bought the Financial Select Sector SPDR ETF (XLF) is up over 20% right now.

And again, in August, we found out one of our favorite big-money managers, David Tepper, was moving into tech stocks—specifically, Google, Alibaba, and Facebook. Those stocks are up an average of 15% in just six months.

Following these reports can make us a lot of money. And right now, the big money is flowing into retail…

The Big Money Is Moving Into Retail

Some companies in the sector are major retailers Amazon, Home Depot, and Nike.

In total, these funds allocated an extra 0.3% into these kinds of companies. Now, 0.3% doesn’t sound like much, but these funds control over $2.7 trillion. So 0.3% means over $8 billion shifted into the sector.

And it’s why it was among the best-performing sectors at the end of 2017. As you can see in the chart below, from October 1 to December 31, consumer discretionary stocks rose 11%… almost double the S&P 500’s 6% return during the same period. 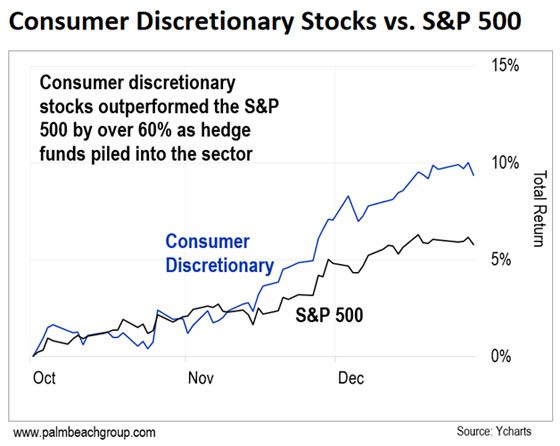 But these guys aren’t moving around large sums of money for just an 11% gain. They’re looking for more…

Billionaire investor Julian Robertson, the “Wizard of Wall Street,” likes pizza stocks. He bought Papa John’s and Domino’s Pizza. Both of those fit within the sector.

Like we said, the “retail apocalypse” was getting overblown. We knew that not all brick-and-mortar retailers would go out of business. Over 90% of retail purchases are still made in stores.

It was only a matter of time until the market realized this. Not only was the selling in retailers overdone, the economy is strong.

We’ve been pounding the table over the past year about how strong the economy is. We saw this firsthand in our road trip through the Midwest. Unemployment is down, incomes are up, and consumers are feeling confident.

All that is going to lead to more spending. According to a survey done by ChangeWave Alliance, 29% of consumers are planning to spend more this upcoming quarter than they did last year. This shows that people are feeling good about the economy.

Big-money investors agree with us. That’s why they’re buying retailers and other consumer discretionary stocks hand over fist.

How to Take Advantage

It’s not too late to get into these companies. The one-click way to ride this trend higher is to buy the Consumer Discretionary Select Sector SPDR ETF (XLY).

If you want to buy a few individual companies, you can look into the Elite 25 portfolio for some quality consumer discretionary stocks that are trading cheaply.

These nine stocks should perform well over the next few years.

Saudis want to cut oil production further. After years of trying to keep oil prices low, the Saudis have reversed course. They’re cutting production and getting their OPEC allies to do so as well. And now that prices have risen and oil inventories are down, Saudi Arabia still wants to keep production low.

Inevitably, this will fail for the Saudis—and the world is catching on. The International Energy Agency (IEA) just said the “colossal” rise in U.S. oil production could make the U.S. the world’s biggest oil producer as early as this year. This plays right into our recent idea about oil drillers…

Steve Eisman of The Big Short fame says banks are in the best shape since the 1990s. Recently, Eisman told Bloomberg TV that he hasn’t been this positive on banks in decades. The reasons why are higher interest rates, deregulation, and tax cuts.

This is no surprise to dedicated Daily readers; we said similar things a year ago. And financials are up over 20% since we started talking about them.

The guy who paid 10,000 bitcoins for two pizzas in 2011 is back. This time he used the new bitcoin Lightning Network to buy a couple pizzas. Instead of paying 10,000 bitcoins, he paid only 0.00649 bitcoin for the pies. It’s still expensive for two pizzas—that’s a $67 bill. But the important part is the transaction cost. It was only $0.06.

The Lightning Network could be huge for bitcoin adoption, as it lowers transaction costs and speeds up transaction confirmations. It’s a story Palm Beach analyst Greg Wilson has been following since last May.

President Trump recently completed his first year in office. And there’s already talk about whether the president will run for another term.

But according to our colleagues at Casey Research, Trump will fail in 2020 unless he can accomplish this one task. 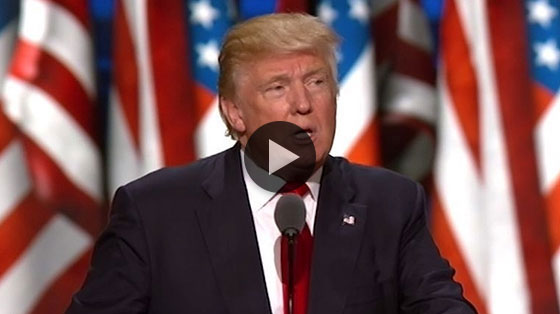