Chaka: Thanks for joining me, T. I was at your presentation on the yield curve inversion here at the Legacy Investment Summit. And it was a crowd-stunner…

Now, when the yield curve inverted this summer, the mainstream media was full of doom and gloom. Fortune magazine even called it a “code red” for the economy.

Yet you say the mainstream is wrong again. Why’s that?

Teeka: When the yield curve inverts, the prevailing “wisdom” is that a recession is imminent. But I’ve made fortunes for my subscribers by proving the prevailing wisdom wrong.

I’ve done it with cryptos, junk bonds, and Apple, just to name a few.

You see, I always read contrarian and unpopular research for new ideas. That’s how I stumbled across the idea I presented yesterday.

And before I get to it… let me tell you what the yield curve inversion means.

But an inverted yield curve doesn’t mean the market will crash right away. It’s a leading indicator. Generally, it precedes a recession by 12–18 months.

Wall Street views inversions as harbingers of doom. Yet my research suggests they can mark the beginning of a massive economic boom.

Chaka: What makes you think this time is different?

Teeka: Most people don’t know this… but from 1879 to 1929, the yield curve remained inverted 70% of the time—and the economy actually expanded. 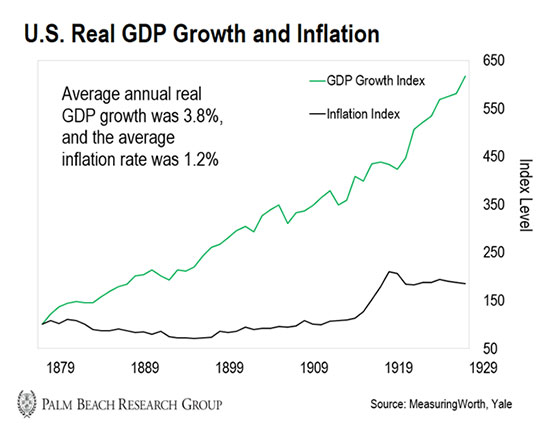 So how can that be? Why was that time different? And how’s it relevant to today?

Chaka: Those are good questions. Can you answer them?

Teeka: Of course. Like I said earlier, most mainstream analysts believe an inversion leads to a recession. But instead, I think we’ll see what research firm ARK Invest calls a “deflationary boom.”

Deflation is when the price of goods and services drop. Most people think that falling prices is a good thing… But over time, deflation will reduce a currency’s value.

We don’t need to go into all the details. Readers just need to know that not all deflation is bad. For example, when prices drop because of innovation, that’s a good thing for consumers and businesses.

And that’s what happened when the yield curve inverted in 1879. We saw a deflationary boom instead of a recession.

Chaka: A deflationary boom sounds scary. So why is it bullish?

Teeka: It all has to do with something called productivity gains. It’s just a measure of efficiency. Simply put, when you can produce more, you can increase profits.

Imagine you’re a doctor. If you can see four patients per hour at $100 per patient, that translates to $400 per hour.

Now, let’s say a new technology like telemedicine allows you to see eight patients per hour. You can drop your price to $75 per patient and still make $600 per hour.

So the productivity gains of telemedicine dropped the costs for patients by 25%, but increased your profits by 50%.

That’s the power of productivity gains: lower prices and greater profits. And we saw this happen across the U.S. from 1879 to 1929…

The introduction of electricity, the railroad, the telephone, and the internal combustion engine boosted earnings, while massively dropping costs.

Electricity meant you could run four factory shifts instead of just two—essentially doubling your output with a marginal cost increase.

Telephones allowed immediate communication rather than taking days or weeks to send messages by horse.

And the internal combustion engine transformed transportation, agriculture, and other industries. You no longer needed hundreds of men to plant and harvest when you could use a few tractors instead.

So these technological achievements exploded profits and imploded costs. That’s a deflationary boom.

Chaka: And the inverted yield curve is signaling another deflationary boom?

Gene therapy will allow doctors to detect, diagnose, and even cure diseases like cancer. As a result of these lower prices, the demand for entire human DNA sequencing is beginning to explode.

And regular readers know I’m a fan of blockchain—the technology behind cryptocurrencies like bitcoin. We believe blockchain will disrupt entire industries by making it easier to record all types of transactions.

Companies are investing more in robots to handle routine and repetitive tasks, allowing them to cut costs and prices. Industrial robot costs are heading toward $10,000 per unit—with a payback period of six months. So small businesses will be able to access productivity enhancements that were never possible before.

By 2022, the demand for EVs will begin to outpace that for gasoline-powered cars. EVs will eventually lower fuel and labor costs by displacing drivers… which will be passed on to consumers while also increasing company profits.

And one study by Accenture’s research team estimates AI technologies will increase labor productivity by up to 40%. It’ll help people use their time more efficiently. Contrary to what many doomsayers think, AI has huge potential to boost economic growth.

So each of these five industries will be worth trillions in the coming years. And I’m keeping an eye on ways to play each one.

Chaka: That’s a lot to chew on, T. And how can our readers play this?

Teeka: Look, I believe investing in disruptive innovation is a clear path to wealth creation. So you should carve out a small, opportunistic part of your portfolio for each of these areas.

In the meantime, I’ve found five stocks to play each of these five drivers. Now, to be fair to the people attending the Legacy Investment Summit, I can’t give them out to everyone.

But again, regular readers know I’m a big fan of blockchain technology. So if you want to get exposure to this driver, consider the Amplify Transformational Data Sharing ETF [BLOK]. And always remember, do your homework before making any investment.

Chaka: Thanks for talking to me today, T.

Chaka’s Note: Another way to profit from the blockchain megatrend is through cryptos. And anyone who’s familiar with Teeka knows he’s been pounding the table on bitcoin and altcoins for years.

Recently, he held his first crypto training session of the year—and revealed five coins that could make you a crypto millionaire. He even included the name of his new top crypto pick. So be sure to catch the exclusive replay of his special event right here.