In case you missed it, the market is down…

Since peaking on September 20, the S&P 500 Index has pulled back 6% and the tech-heavy Nasdaq has dropped 10%. Huge stocks like Apple and Amazon are near crash territory—down about 17% each.

That’s because the market has dropped below its 200-day moving average. That’s a key resistance level and a short-term bearish sign. 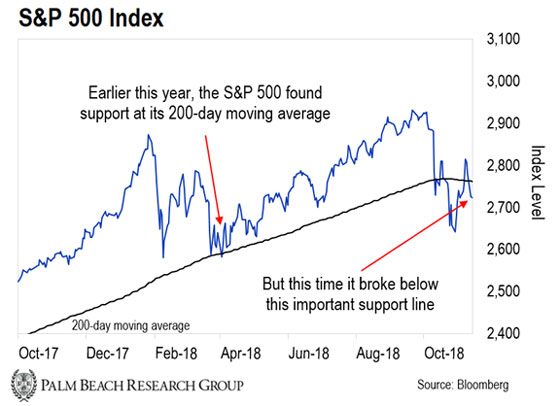 As you can see, the market attempted to break out of the downtrend last month. But the breakout didn’t hold… Many analysts expect more volatility ahead. I’m one of them.

Now, that may come as a surprise to Daily readers who know I’m a long-term bull.

I still believe the market will go up in the long term. But even in a bull market, there will be pullbacks. We experienced a major sell-off in February as well.

This temporary pullback doesn’t mean you should panic and sell all your stocks. In fact, smart investors won’t… Instead, they’ll move their money into stocks that can weather the current storm…

In today’s essay, I’ll show you where that is. But first…

Growth Stocks Are Getting Clipped

As I mentioned above, every bull market has pullbacks. But just because there is a pullback doesn’t mean you should get out of stocks.

The trick is to find out which stocks are going down… and which stocks are bucking the downtrend. That tells you where investors are removing their money from… and where they’re putting it.

As I mentioned above, Amazon and Apple are suffering corrections. Other growth stocks are faring even worse.

Facebook is down 35% off its highs and Netflix is down 30%—putting them in bearish territory. These are all members of the high-flying FAANG group (Facebook, Apple, Amazon, Netflix, and Google’s parent Alphabet).

Over the years, investors piled into FAANG stocks, as well as a few other highfliers…

To make it easier to buy these stocks, the New York Stock Exchange created a basket of them called the NYSE FANG+ Futures Index.

As you can see in the chart below, it’s been decimated over the past four months. 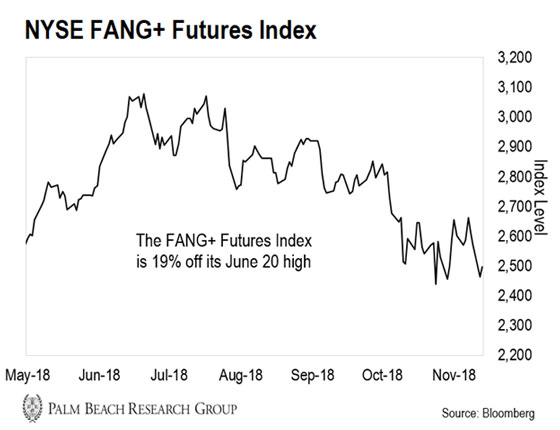 While investors are fleeing growth stocks, they’re seeking shelter in a boring and safe sector of the market.

These Safe Havens Are Thriving

These are stocks that pay relatively high yields to compensate for their tepid growth and earnings potential. They’re also much more stable than growth stocks… and can thrive during bouts of volatility like we’re experiencing now. 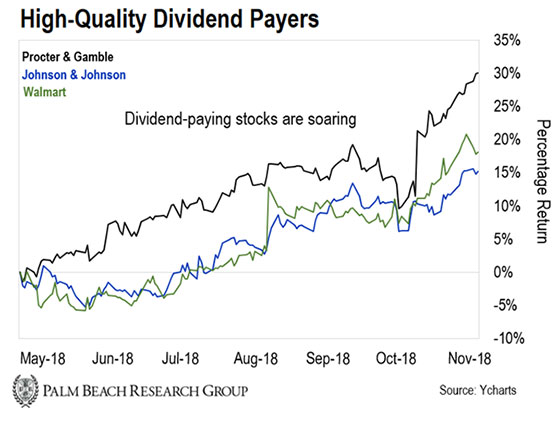 Consider adding some exposure to high-quality dividend payers over the next couple of weeks. They’ll shelter your portfolio while the market sorts out what it wants to do.

More Proof of a Strong Economy

Workers are getting harder to find…

According to the National Federation of Independent Business’ (NFIB) monthly job survey, 38% of small businesses struggled to fill open positions in October.

As you can see in the chart below, that’s a record high… 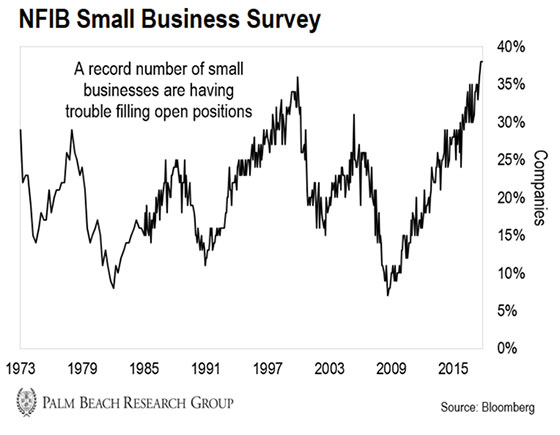 We’re in uncharted territory… And this trend doesn’t look like it will stop anytime soon.

Companies are competing harder than ever before to hire workers. That’s why even McDonald’s is offering signing bonuses.

It’s never been a better time for people to look for work. Higher pay for employees means more money in consumers’ pockets.

That’s good news heading into the holiday season… and for investors in quality retail stocks.

A recent commentary in The Wall Street Journal called it a “Pet Rock.” UBS went so far as to say it’s “obsolete.”

But we’re here to tell you that gold is NOT dead. And THIS is why.

The answer is going to change how you view gold—and how you invest—forever. It could also make you an absolute fortune, starting immediately. We’re talking the potential for a six-figure payday if you make the right move today. 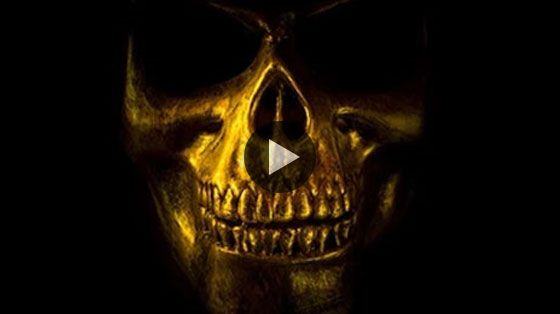