Last month, Spark Therapeutics announced its newest drug would sell for $850,000—for one treatment.

The name of the drug is Luxturna. And it’s the most expensive drug on the market.

The Food and Drug Administration (FDA) approved Luxturna in December 2017 to treat a rare, inherited eye disease that can lead to blindness.

Some consumer groups said the price was too high.

“We believe it’s a scientific milestone, but that for the majority of patients being treated, the cost is not in line with what’s considered cost-effective,” said the head of the Institute for Clinical and Economic Review (ICER).

Spark isn’t the only drug company with expensive treatments.

We won’t debate whether the cost of these types of treatments is too high. The market will eventually determine that.

We do know that red tape contributes to the exorbitant prices. That should change soon.

The treatments above are expensive because they use gene therapies and/or immunotherapies.

Gene therapy is an experimental technique that uses genes to treat or prevent disease. Doctors insert genes into a patient’s cells instead of using conventional drugs or surgery.

And immunotherapy uses a person’s immune system to fight diseases such as cancer.

Both are very expensive…

You see, gene therapies and immunotherapies target rare or inherited diseases. Since the market for them is so tiny, they’re not mass-produced.

Plus, doctors must tailor these niche drugs to each individual patient. And that makes it harder to get approval for them.

Only 5.1% of gene therapies and immunotherapies make it through FDA trials. That’s compared to an 11% approval for other drugs.

And failed trials are costly. Estimates vary, but each failed trial costs between $648 million and $1.4 billion.

President Trump wants to cut costly FDA regulations that contribute to excessive costs. (FDA regulations alone take up more than 4,000 pages of the Code of Federal Regulations, which totals over 90,000 pages.)

And in September 2017, the agency announced it had begun the process.

Slashing red tape will speed up times from approval to market. If drugs get to market faster, that will lower costs. And lower costs will go straight to the bottom line.

Reducing regulations will make gene therapy and immunotherapy companies much more profitable… And ripe for the picking for bigger drug companies.

You see, it’s easier for the Big Boys to buy companies already working on niche products than to develop them from scratch.

And there is buyout frenzy in the biotech space…

In yesterday’s Daily, we told you President Trump’s one-time 15% tax break on overseas profits will inject billions of cash into the biotech space.

Larger drug companies will use that cash to buy smaller companies with approved products (or products in the approval pipeline).

That’s because it’s less expensive to pay cash for a proven drug than gamble on developing one of your own.

Juno’s stock rose 75% in a week on the news. And Bioverativ 60% overnight.

Below, I’ve compiled a list of nine immunotherapy companies that I think are likely takeover targets because of their drug pipelines:

Biotech stocks are very speculative. So it’s even more important that you do your homework before considering them.

If the FDA approves a company’s drug, you could see 100%-plus gains in six to 12 months. But if just one drug fails, the stock can crash 50% or more overnight.

This type of volatility isn’t for everyone.

Treat biotech stocks as Smart Speculations. That means don’t bet the farm on them.

Do you have your own asset allocation model? If so, tell us how it works right here.

Amazon’s Next Big Move: Amazon has partnered with JPMorgan and Berkshire Hathaway to create its own healthcare company. The joint venture will cover the half-million Americans who work for the three companies. The not-for-profit venture could negotiate directly with hospitals and drug companies to lower prices. That would cut out middlemen like health insurers, pharmacies, and benefits managers. Healthcare stocks fell on the news. This is a story we’ll follow closely in the Daily.

The Crypto Multiplier Effect: Graphic processing units (GPUs) are specialized computer chips used to display images. They’re popular in PC gaming. But they’re also a key component in servers used by cryptocurrency miners. And mining demand for GPUs is sending prices higher. For example, the price for Nvidia’s GeForce GTX 1080 Ti graphics card has jumped from $499 to as high as $1,250. This is bullish for semiconductors, and just the latest reason you should get in on this trend…

Consumer Confidence at Record High: The U.S. consumer confidence index measures how optimistic people are through their saving and spending activities. And right now, it’s at a record 17-year high. You see, people are spending a lot and saving little. That’s a sign that the economy is strong. As long as people continue to spend their income, look for the bull market to continue.

From Robert L.: I have about one-third of my crypto funds in 30 alt coins and the rest in bitcoin and ether. During this recent crash, I’m buying more of everything and holding fast for the bright future I know is coming.

I purchased my first bitcoin back in 2014 for about $700… only to see it drop by 50%. I forgot about it until this summer. I was shocked to see it hit almost $20K. That gave me the funds and confidence to buy more and to invest in alt coins. I waited four years the first time and I’m willing to wait again.

From Kelly W.: Hello Nick… I just felt the need to let you and your Palm Beach Research Group staff know what a great job you’re doing. Our family appreciates your hard work.

Want to appear in the Daily Mailbag? Send your feedback to us right here…

For the first time ever, Bill Bonner will join legendary speculator Doug Casey for the single most significant event in our firm’s history. We’re calling it the “Legends of Finance Summit.” The event will air on Thursday, February 8 at 8 p.m. ET.

During this free event, Bill will reveal the secret behind his Trade of the Century… and how Doug has used it to build multiple multimillion dollar fortunes over five decades.

This is the first time that Bill and Doug have shared a stage like this… So, you don’t want to miss it. Reserve your seat today… 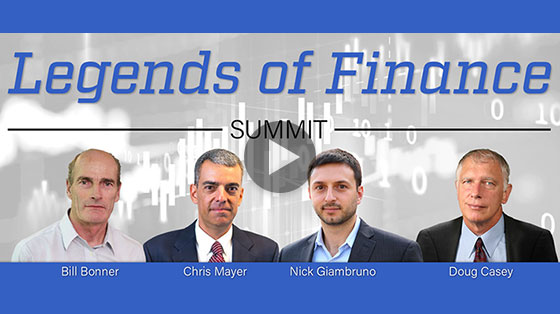