Most of the time, I shy away from talking about stock market timing.

It’s very difficult to do. And that means it’s easy to look very stupid very quickly.

So I won’t tell you equities have bottomed here.

For a deeper dive into where I think the market could end up before this is all over, click here to read what I wrote last week.

The explosion of computerized trading has made stock market timing progressively harder.

Even Bridgewater Associates, the world’s largest hedge fund, wasn’t nimble enough to avoid this decline. Bridgewater manages about $160 billion. And Financial Times reports it’s looking at losses of around 20% across its funds.

But there’s one area that the computers haven’t taken over yet. This makes it much easier to time. And the area I’m talking about is the crypto market.

Many thought this was an odd decision, with all the volatility in both the stock and crypto markets.

In fact, the most common question I got from prospective new subscribers was, “Why would you open membership now with the crypto market down so much? Wouldn’t it be smarter to wait until crypto investor sentiment was high?”

The answer I gave them was timing…

You see, when I open my doors to new members, I make the boldest guarantee in the newsletter business. I guarantee a 1,000% cumulative return in the first year. And to make and meet that type of guarantee, I have to get the timing right.

That’s why nearly every time I’ve opened Palm Beach Confidential to new members, the entire crypto market was getting devastated.

But guess what? It ended up being perfect for new members.

Again and again, I’ve refused to open my doors to new members during the boom times… Even though I would have sold more newsletter subscriptions.

Longtime readers already know selling the most subscriptions has never been my goal.

My primary focus in this life is to help as many people as I can vastly improve their financial lives without putting their current lifestyle at risk.

And according to testimonials from thousands of satisfied subscribers who have saved their retirement accounts… paid for vacation homes… and funded their children’s educations with the gains I’ve helped them make, I’m doing a pretty good job so far.

That’s why I wait for prices and sentiment to get hammered before reopening Palm Beach Confidential. And as of this writing, it’s paying off just like virtually every other time.

In the few days since reopening, we’ve seen bitcoin jump as much as 31%.

We’ve seen the altcoin market (any crypto other than bitcoin) jump as much as 29%.

In my special presentation last Wednesday, I warned the window of opportunity would rapidly close. Here we are – less than a week later – and that’s exactly what’s happening.

However, there’s still time to get involved. And that’s what I want to talk about today.

Every four years, two forces come together that shoot a handful of crypto coins into the stratosphere.

Along the way, they make thousands of early crypto investors multimillionaires.

I call this event “The Phenomenon.”

Like I mentioned, it happens every four years. And I can tell you it’s 100% guaranteed to happen again – regardless of what’s going on in the crypto and stock markets.

Five hundred dollars into each of these coins would have been worth as much as $2 million, $2.7 million, and $5 million, respectively.

Force No. 1: The Bitcoin Halving

The first of these twin forces is called the “halving.”

This is when the new supply of bitcoin is cut in half.

There can never be more than 21 million bitcoins in existence. Their issuance is strictly regulated by computer code.

When that halving event occurs, the bitcoin reward will drop from 12.5 to 6.25 bitcoins.

Why is that important?

Bitcoin is the gateway to crypto. Think of it as the reserve currency of the crypto world. So if demand stays the same, but supply gets cut in half, what happens to the price?

And when demand skyrockets, it goes up a lot. From the last halving to the end of 2017, bitcoin rose 2,162%. That’s an amazing gain. But it’s nothing compared to what happened with altcoins… 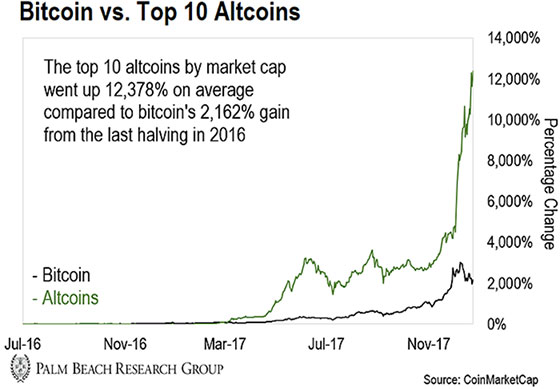 But cutting the supply of bitcoin is not enough to turn a few $500 investments into a multimillion-dollar fortune.

Force No. 2: Massive Increase in Demand

The second force behind The Phenomenon is a massive increase in demand.

That’s why I recently chartered a private jet to Switzerland… It’s the epicenter of the crypto boom. I wanted a firsthand look at what was happening in this space.

Switzerland is home to one-third of the world’s offshore wealth at $2.3 trillion.

But demand for crypto doesn’t stop there:

And this is all just the tip of the iceberg…

We’re on the verge of 500 million stock investors being able to buy crypto with just one click of their mouse. I believe that huge influx of demand will ignite the prices of a handful of coins to levels we’ve never seen before.

And that’s why I chose now to release the names of my “Final Five.” Just a few hundred dollars in each of these five cryptos could change your life forever.

Whether you choose to join me and get access to the “Final Five” or not… I highly recommend you watch the presentation I aired last week.

It will educate you on exactly why I project you have the lowest-risk/highest-reward opportunity of your life in front of you.

And why, for the very last time, you have a chance to transform a handful of $500 investments into as much as $5 million.

P.S. As I mentioned above, I’m reopening the doors to my Palm Beach Confidential service. But only for a limited time.