Life-changing ideas are often poorly understood. That leads to most people being uncomfortable investing in them.

The reality is that at first, most revolutionary ideas seem too niche, too abstract, and too impractical for mainstream adoption.

Think back to the time you first heard about the internet.

If you thought it was a novelty… a way for geeks to talk to each other… or a place for posting pictures of dogs and cats… rather than a game-changing technology, you weren’t alone.

That’s what most people thought about it – including many of Wall Street’s smartest investors.

I know because I was working on Wall Street at the time. And I had plenty of those conversations.

This headline from a Newsweek article in 1995 says it all… 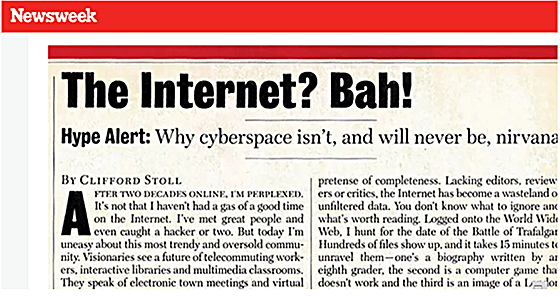 Could they have been more wrong?

Another example is cell phones.

Back in the 1990s, Motorola’s original bag phone was one of the more popular attempts at creating a portable cell phone. It was also the size of a purse… 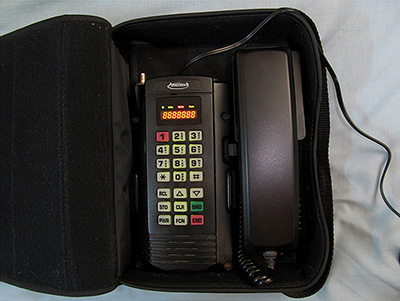 And at another 45 cents per minute – plus additional roaming or long-distance charges – it was simply too expensive for most people to use the product.

At the time, did it seem plausible that every teenager in America would end up using a mobile phone from dusk ’til dawn daily?

Today, you’d be hard-pressed to find someone who doesn’t have a cell phone with full internet access.

Moreover, they’re almost certainly using their internet-enabled phone to buy just about anything they want through online retailers like Amazon.

Today, we take that entire process for granted.

But most people didn’t believe it was going to happen back in 1997. They were too uncomfortable with the idea.

And they missed out on a fortune…

I Was Uncomfortable With This Idea, Too

If you’re uncomfortable with new investment ideas, I can’t blame you. I’ve made the same mistake, too.

When I first found bitcoin in 2011, I dismissed it.

I said, “This is magic internet money. This is a crazy Ponzi scheme.” I sounded just like today’s bitcoin critics.

I had spent 22 years on Wall Street as an executive and hedge fund manager. And despite early articles showing me bitcoin was a revolutionary asset… it made me uncomfortable.

I thought that anyone recommending bitcoin was gambling with their professional reputation. It just felt crazy to me.

It had nothing to do with research (I hadn’t done a deep analysis yet). It was all about my emotions.

But my opinion changed when bitcoin collapsed in 2015… and it didn’t go to zero.

As the saying goes, “All frauds go to zero.” But this “fraud” was still worth $6 billion. The fact that bitcoin still had so much value told me I’d made a mistake dismissing it.

And that’s when I started to do a deep research dive into the crypto.

I inserted myself into the crypto space. I became friendly with the major players in bitcoin. From those insiders, I understood why bitcoin had value… and why it would continue to become even more valuable.

I discovered you could use crypto to move, store, and account for value without relying on a trusted third party. In that moment of realization of what bitcoin really was, I knew it would grow to be a trillion-dollar idea.

Even though bitcoin had been around for six years and had risen from zero to as high as $1,400… I knew I was still early on the trend. It was only worth $6 billion, and I was convinced it would be worth trillions of dollars one day.

I didn’t come to that conclusion by myself. Again, my network of insiders gave me a massive edge over everyone else in the traditional finance world.

The bitcoin insiders showed me the scale of the adoption and development happening on the bitcoin network.

Armed with that knowledge, I made it my mission to get my subscribers into bitcoin.

Just imagine if I’d done the research in 2011 and brought it to my readers then?

Here’s what I want you to take away from this…

How I Trained Myself to Invest in Uncomfortable Ideas

The biggest gains from megatrends like the internet or cell phones or cryptos are made as the world moves from the early adoption phase to the mass adoption phase.

But in the early stages, these ideas are often misunderstood. And that makes people uncomfortable. I know this from personal experience.

That’s why I’ve trained myself to follow the research no matter where it leads me… even when it makes me uncomfortable.

And I developed a simple two-step checklist to prevent myself from making the same mistake again:

I want you to write this checklist down. Repeat it every day.

Train your mind to ask these two questions every time you invest in an uncomfortable idea: Am I early? Am I right?

If you answer yes to both questions… then it’s a no-brainer.

No matter how uncomfortable you feel… if you are early and right… you’ll make a fortune investing in trillion-dollar trends.

Friends, I want you to practice the lesson I just taught you over and over. Because I’ve found another uncomfortable idea I believe will turn into my next trillion-dollar trade.

When you hear it… you’ll believe I’m crazy (just like people did when I first recommended bitcoin in 2016). You’ll probably reject it. You might want to run as far away as you can.

You’ll be uncomfortable with it.

But before you judge it… I want you to ask those two simple questions: Am I early? And am I right?

And on Thursday, July 8 at 8 p.m. ET, I’ll answer those two questions for you.

That’s when I’m holding my Third Trillion-Dollar Trade event. During the event, I’ll reveal this $1 trillion trend… show you how early we are… and tell you how to access the right companies to profit from it.

This event is so big I’ve also invited some special guests, including my new partner on this project. He’s a man from the world of venture capital and an expert in the industry. He will help us unlock this exclusive opportunity.

I can’t wait for you to meet him.

He’s a millionaire investor – and former Wall Street Vice President – who’s been featured in Vice magazine… Playboy magazine… and Fox Business. And when it comes to my next Trillion-Dollar Trade, he is by far the smartest man in the room.

Due to the explosive nature of the investment ideas behind my next trillion-dollar opportunity, I can’t reveal his identity until Thursday, July 8, at 8 p.m. ET. So mark this date down on your calendar.

Friends, please don’t make the mistake of avoiding a life-changing idea because it makes you uncomfortable.

Train yourself to ask those two simple questions: Am I early? And am I right?

And then let me show you why the answer to both is yes.

P.S. As a bonus for attending, I’ll give away a never-before-released pick with the potential to 10x your money from this $1 trillion trend. You’ll get the name and ticker symbol during the event, no strings attached.

To date, my past free picks have an incredible average peak gain of 1,691%. So you’ll want to come just for that.

Plus, event VIPs get my special bonus report. Click here to learn how to become a VIP for free.