Nick’s Note: In May 2017, world-renowned cryptocurrency expert and PBRG guru Teeka Tiwari wrote one of our most popular Daily essays, “They Killed Bitcoin 129 Times; Each Time, It Came Back Even Stronger.”

Since then, the premature obituary continues to grow… Yet despite the recent pullback, bitcoin is still here and thriving. In today’s essay, Teeka explains why bitcoin will emerge even stronger in 2018 and beyond…

Do you hear that?

It’s the deafening cries of all the bitcoin haters out there.

I want to show you why it’s critical that you ignore all the bitcoin naysayers… and start getting on board with bitcoin.

Believe me when I say it: Bitcoin is here to stay.

Not only that, it’s on the cusp of a massive move higher… along with the entire crypto market coming behind it. It’s a trend you’ll desperately want to be a part of.

So today, I want to tackle the biggest objection to bitcoin I hear… that it’s "worthless."

Newsletter writers, journalists, and academics have called it a "Ponzi scheme." Even JPMorgan Chase’s CEO Jamie Dimon—whose company has been fined billions for financial abuse—has called bitcoin a "fraud" whose value is "probably zero."

Others like the idea in theory, but still have doubts. They are convinced the government will shut down bitcoin and render it worthless. If it were 2013, I would have agreed with them.

It looked like a classic "pump and dump" to me. That’s why I ignored it.

But then, something interesting happened.

Instead of collapsing back to pennies, bitcoin found support in the $200 range. Even after the bubble popped, bitcoin was still worth billions.

This intrigued me because true Ponzi schemes have zero value when they crash.

The fact that bitcoin was still attracting buyers even after the onslaught of negative news… an 85% price crash… and universal scorn… said something to me.

It said that maybe this asset had real value. At the very least, it told me that more investigation was needed.

Lessons From the Dot-Com Bubble

But again, something interesting happened…

In the depths of the dot-com hatred, Amazon started quietly climbing in price. Back then, I made the mistake of dismissing this action.

My error was buying into the prevailing belief that dot-com stocks were dumb and worthless.

I listened to the narrative instead of digging deeper into the Amazon story.

That was a mistake of lazy thinking. So when I saw the same thing happen with bitcoin, I decided to do something different.

Instead of listening to the skeptics, I asked myself: "Why are people still buying this supposedly worthless asset?"

That’s when I did a deep-dive into bitcoin.

For the last 2 1/2 years, I’ve traveled the world interviewing experts, development teams, and venture capitalists. I wanted to understand why bitcoin has value.

Even Governments Are Embracing Bitcoin

Just as important, I wanted to know what would stop the U.S. government from banning it.

How would the currency outgrow its widespread reputation as a form of "black money" used by criminals?

What I found was this: At its core, bitcoin is just a way to send and receive value without the need for a “trusted” middleman. Bitcoin has no central location. That means no government (including the U.S. government) can ever shut it down.

In fact, several countries have already tried to ban bitcoin. Many have found (and will find) that it’s impossible. Others, such as Japan, have decided to recognize bitcoin as money.

Governments will continue to realize that it’s better to have a hand in how bitcoin is shaped and regulated than try to destroy it (which they can’t).

Think back to when the U.S. government finally realized that Prohibition was unenforceable. It was better to regulate alcohol and tax it.

The real strength of bitcoin is the underlying network of highly secure computers that support it. These computers run a new form of database called the "blockchain."

Blockchain technology enables you to move money and data without having to rely on a trusted middleman. It’s truly revolutionary.

More than $4 billion per day is transacted across the bitcoin network… without the need for a central clearing authority. That has never happened before, and it makes bitcoin a unique asset.

As I write, software developers across the world are building applications designed to piggyback off this network.

Over the next three years, we’ll begin to see a slew of new applications emerge for bitcoin and the network that supports it. They will support everything from tracking assets to recording land registries… and much more that we can’t even think of yet.

That’s why bitcoin will continue to grow in value.

The next time you find yourself being scared out of owning bitcoin by a negative article, do yourself a favor… Read about the last 300 times bitcoin was declared dead.

Let the Game Come to You,

P.S. On Thursday at 8 p.m. ET, Glenn Beck and I are hosting an exclusive LIVE event called The Great Cryptocurrency Conspiracy of 2018. We’ll be dispelling ALL the myths you’ve been hearing about bitcoin and other cryptos… and we’ll lay out the groundwork for how you can take part in the massive boom that’s right around the corner.

Nick’s Note: For the first time, Teeka is pulling back the curtain and showing Daily readers actual conversations that he’s having with his network of key movers in the cryptocurrency space.

Teeka rarely discloses these discussions to the public, so this is rare insight that you won’t find anywhere else.

In this raw footage from one of his recent insider discussions, Teeka talks to a specialist in cryptocurrency regulation.

And what she revealed gave Teeka a big hint as to why a large amount of money could soon come flooding into this space… You won’t want to miss her insights.

After watching, make sure to mark your calendar for July 19. That’s when media personality Glenn Beck and Teeka will host their first-ever live event from Glenn’s Dallas studio.

As Teeka mentioned above, he’ll tell you the truth, the whole truth, and nothing but the truth about cryptocurrencies.

Plus, you’ll learn how to get your share of the $2 million bitcoin giveaway. 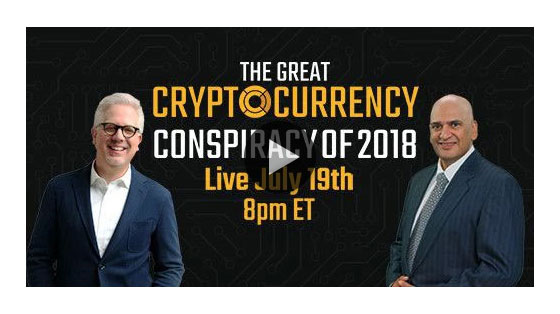