Nick’s Note: When it comes to technical analysis, there are few better than master trader Jeff Clark. He scours the charts to find his readers the most profitable trade setups out there. We follow him closely at the Daily. Below, Jeff says one important chart favors the bulls—at least in the short term…

The S&P 500 gained 2%—its best performance in quite some time. The index is now in positive territory for the month. And I expect the gains to continue.

For most of the past two weeks, the market action has been constructive for the bulls. The S&P 500 has been making higher lows and higher highs—which indicates bullish momentum. And, so far at least, the technical indicators have avoided reaching into overbought territory. So, there’s still enough fuel to power the market even higher.

But, as a trader, I’m always on the lookout for conditions that might cause a change in the forecast. It’s like a sailor looking for storm clouds on the horizon.

The seas are relatively calm right now. The skies are clear. It should be smooth sailing ahead for the bulls in the short term.

But there is a small patch of turbulent air just a few nautical miles ahead. It’s nothing right now. And it may never amount to anything later on. But traders should keep an eye on it just in case.

I’m referring to the current setup in the Volatility Index (VIX). Take a look at this chart of the VIX plotted along with its Bollinger Bands…

The VIX is commonly referred to as Wall Street’s “fear gauge.” It rises as investors grow fearful. It falls when investors are complacent.

Right now, the VIX is still within its Bollinger Bands. We don’t have any sort of extreme condition of which to take note.

For now, the skies are clear and the sea is relatively calm. But keep an eye on this chart of the VIX. It will tell you if a storm is on its way.

P.S. As the founder of a $250 million trading firm, my client list included Fortune 500 executives at Boeing and Chevron, as well as pensions and pro athletes.

But I never fully revealed to them—or anyone—what I’m going to show in this free presentation. In fact, outside of a dozen of the world’s biggest institutions like Wells Fargo, UBS, and Merrill Lynch… no one knows it exists.

I call it “Quantum.”

And just like quantum breakthroughs in physics and computing, this completely revolutionizes money-making. You can learn more right here…

From James W.: I swear, Teeka, I feel better after one of your video updates than I do after great sex.

My concern came at the end when you said that there are only 21 million bitcoins that can ever be mined, which is not enough for every millionaire to own one. I own about 1 bitcoin (BTC).

I am just trying to understand why more people are going to want to own BTC. Other than diversification, what’s going to drive demand? BTC doesn’t have the same utility as the other tokens you have recommended. The only real utility I see for BTC is for the purchase of other cryptos.

Nick’s Reply: Thanks for the feedback, Marvin. You must have missed our April 12 issue (“Why It’s Now Riskier to NOT Own Cryptocurrencies”). Institutions are preparing to send trillions of dollars into the cryptocurrency space. Teeka calls this the “Second Boom.” When the floodgates open, the demand for bitcoin will soar. It’s a theme we’ve been following since the beginning of the year.

From John S.: A great big thank you to Teeka. I’ve made money on his advice and I’m now paying taxes… ugh.

When more crypto millionaires are made in the near future because of your advice… you will receive more invites to travel the world on their yachts and never be at a loss for a fancy dinner.

From Michael M.: This course is EXCELLENT! I’ve only been in the crypto space for six months and it was slow going in the beginning. Fortunately, my first purchase was The Palm Beach Letter and it has been well worth the money.

A course like this would have educated me a lot faster and allowed me to make purchases sooner and with more confidence. Thanks for all you do to keep us educated in the crypto space, Teeka, and thanks to Glenn for partnering on this course.

From Coralie L.: Fantastic course. It cleared up a lot of my confusion about cryptocurrency terms, exchanges, and starting the process. I feel so much better prepared.

From Riley B.: Gets the point across as an introduction. However, I learned nothing. Also, some of the questions are now outdated.

From Jack S.: I would have liked more step-by-step instructions on how to purchase cryptocurrencies.

From Denise K.: Thank you for the Crypto Master Course. I had already bought bitcoin and set up an account, but didn’t know what to do next. Now, I’m going to try buying other coins. I’ll also check out the additional resources you have provided.

If we tried to sell this book in bookstores, it would be banned…

In it, Doug gives his take on everything from genderless babies… to the modern space race… and last year’s NFL protests. And he doesn’t mince words. See why some are outraged at this new book by clicking right here. 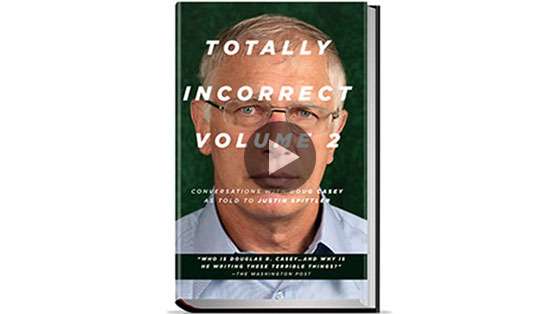