In 2016, the U.S. had one of its most contentious elections ever.

Trump vs. Hillary was unlike anything I’d ever seen… Donald Trump chanted “lock her up.” Hillary called Donald’s supporters “deplorables.”

The two were very far apart ideologically, too…

Wall Street hates political uncertainty. And the 2016 presidential election was full of it.

That’s why U.S. stocks were relatively unchanged leading up to the 2016 presidential election. But after the election, the market soared. 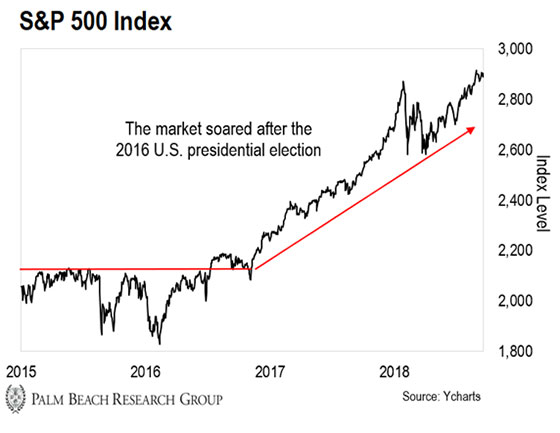 The S&P 500 rose 39% over the next 22 months. That’s because Trump’s victory removed political uncertainty… Investors knew what would happen going forward.

This statement will probably alienate everyone—Democrats and Republicans alike. But I think the market would have rallied no matter who won the election. Different sectors might have rallied if Hillary won… But either way, the overall market was going up.

At the Daily, we’re always looking for money-making opportunities. And taking advantage of short-term market fears for long-term gains is one of them.

You see, we’re seeing a similar situation to the 2016 U.S. election playing out abroad.

Political uncertainty is roiling this country. The exchange-traded fund (ETF) that tracks it is trading at two-year lows. And it’s now one of the cheapest countries on the market.

Once the country’s contentious presidential election is over, we think the market will recover and zoom higher—regardless of who wins. That’s a win-win proposition for us.

Heading into its October 7 presidential election, Brazil’s democracy is in shambles.

With 207.4 million citizens, Brazil is the second-largest country in the Western Hemisphere. It also has the world’s eighth-largest economy based on GDP.

That makes Brazil a major player on the global stage. But the country hasn’t had a steady leader since Luiz Inácio Lula da Silva left office in 2011.

Sensing his country’s plight, the popular leader decided to run for president again. But there’s one problem: He’s serving a 12-year prison sentence for corruption. (The Brazilian Senate also impeached his successor, Dilma Rousseff, in 2016.)

Despite that, Lula was the front-runner until he pulled out of the race last week after Brazil’s Supreme Court ruled he was ineligible.

On September 6, an attacker stabbed the current front-runner, far-right candidate Jair Bolsonaro, in the abdomen during a rally. Doctors expect Bolsonaro to recover from his near-fatal wounds. But he’s now facing an uphill battle.

A motley crew of four other contenders from the left and right round out the fray. Polls suggest that no candidate has the outright majority required to win Brazil’s presidency in the first vote. So pollsters expect a runoff between the top two candidates.

We don’t know who will win Brazil’s presidential election—and it’s not really our business. What we do know is that the political chaos is rattling the country’s markets… and that’s a chance to buy Brazil on the cheap.

Brazil Is on Sale

Take a look at the chart of the VanEck Vectors Brazil Small-Cap ETF (BRF). It holds a basket of smaller Brazilian companies that mostly do their business at home. 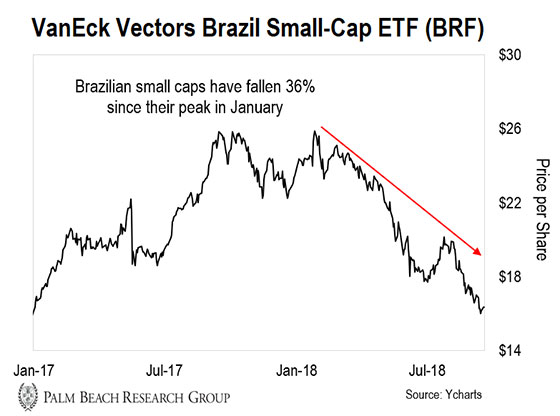 As you can see, these companies have suffered during this time of political uncertainty. BRF is down 36% from its January high.

It’s also the cheapest country ETF on the market… at least based on its price-to-earnings (P/E) ratio. (The P/E ratio measures how much investors are paying for each dollar of current profits.)

Here’s why that makes Brazil a deal…

According to a 2016 study by financial firm Star Capital Investments, the average annual real return (inflation-adjusted) of world markets over the past 40 years has been around 6%.

If you buy a country’s ETF when its P/E ratio is less than 10, you can expect a real return of 12% over the next 10 years… That’s more than double the average.

Here’s What We’re Betting On…

Once the election settles in late October, Brazilians will have more clarity about their political future. And the market should rally.

If Brazil’s market rises to its historical valuations… we could see a long-term rise of 347% in the next three to five years.

I like the odds of Brazil’s election resolving peacefully in the next couple of months. But there’s always risk when trying to bottom-pick cheap ETFs.

If the election drags on and there’s blood in the streets, the market could drop further. But we think that possibility is remote. TheGlobalEconomy.com rates the political risk of every country on a scale of 1 (low) to 7 (high). Brazil’s score is on the low end at 2.

Buying countries when their markets are cheap has proven to be a successful long-term strategy. But it can take a few years to play out.

As always, do your homework. And never invest more than you can afford to lose.

A leading medical company has discovered a simple blood test that could detect cancer early… when it’s the most treatable. It could save millions… and make you rich. 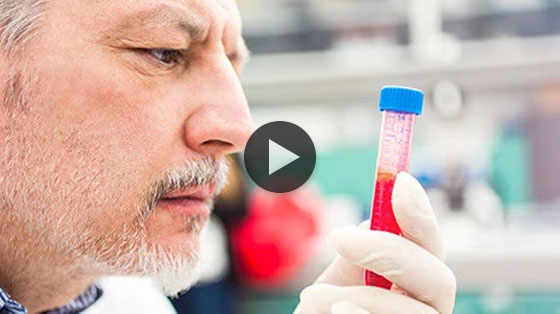