Gold is about to go higher…

Right now, gold is acting exactly as it did last year.

From January to mid-February 2016, gold was up 16%. From there, gold went another 12% higher over the next four months.

At the end of 2016, gold started another uptrend. It’s up 8% since mid-December.

In other words, is this rally sustainable?

We think it is. Here’s why…

How to Know If a Gold Rally Has Legs

Gold can move up for two reasons:

If gold is up based on reason No. 1, then this rally will probably be short in duration.

If gold is up based on reason No. 2, then this rally will probably have long legs.

It’s important to know the difference…

That’s because gold is priced in U.S. dollars. As dollars become stronger, they’re worth more… So each dollar can buy more gold.

You can see this dynamic in the chart below. As the gold line rises, the dollar line declines. They are almost mirror images of one another. 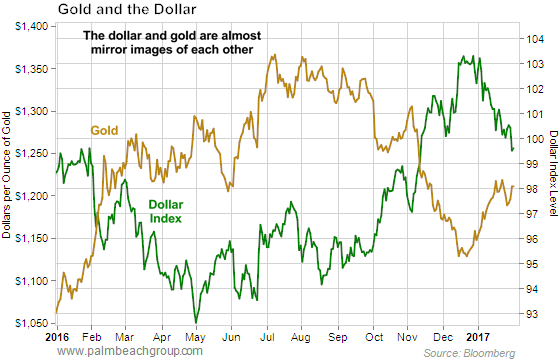 If gold’s rally is based solely on the declining strength of the U.S. dollar, then it’s likely short-lived. If so, you’d be buying into a fake rally…

But we think there’s a fundamental change going on…

As we pointed out above, there are two main forces behind a gold rally: a decline in the U.S. dollar (short-term) or a change in gold’s fundamentals (long-term).

We believe the current rally is due to fundamentals.

A fundamental change is one that changes investors’ perception of gold’s value.

For instance, if investors’ faith in the fiat currency system decreases, they’ll see more value in gold. And that would increase gold prices.

One of the best ways to measure gold’s fundamentals is to look at its price in major currencies.

If gold is going up in all major currencies, chances are the rally will keep going. When this happens, it’s more likely that gold demand has increased.

You can see this in the chart below. It shows gold prices in four major currencies since the beginning of 2016 (the U.S. dollar, euro, yen, and Australian dollar). 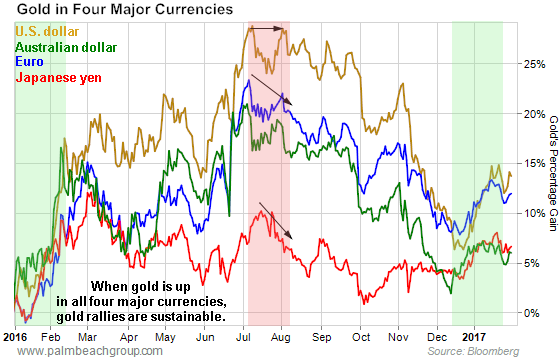 As you can see in the first green box, gold started its big rally in January 2016. During that rally, gold rose in all currencies. This rally lasted one and a half months. And gold increased 16% in U.S. dollars.

This was a sign that demand had picked up in gold. And it was a sign of higher future prices.

But in the other currencies, gold declined sharply. This non-confirmation warned us that gold fundamentals had shifted and prices were going to head lower.

This was a clear sign the rally was over. And gold went down 17% in U.S. dollars over the following five months.

Now, look at the second green box. It shows gold’s rally since December 2016.

From the bottom in mid-December, gold rose in all four currencies. It appears to be taking a little breather now, just like last year… but this rally still has life.

The fact that gold is up in four major currencies simultaneously is confirmation that gold should continue rising from here.

These new, leaner companies are ready to reap the rewards as commodities prices rise.

Investment bank UBS projects free cash flow (FCF) will increase in the next four years. (FCF is cash left over after the company pays all its bills.) 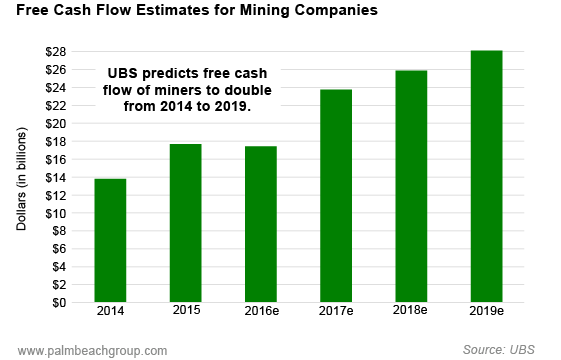 FCF is one of the most important measures of profitability.

With the free cash, companies can invest in better operations, pay a dividend, or buy back shares. Whatever management chooses, shareholders win.

Italian Banking Crisis Intensifies: In January, we told you that the world’s oldest bank, Monte dei Paschi, was in trouble… If it fails, it could bring down Italy’s entire banking system. Now, Italy’s largest bank, UniCredit, needs to raise 13 billion euros to stay afloat. That would be the largest capital raise in the history of Italy’s stock market.

As we’ve said before, Italy’s banking sector is sick. And the contagion could spread to the rest of Europe… and even across the Atlantic to American shores. If it does, you’ll want to own some “chaos hedges” like gold and bitcoin.

Another Tailwind for Gold: Meanwhile, gold fundamentals continue to look good. Per the GFMS Gold Survey (released by Thomson Reuters), gold mining output declined 3% last year as miners struggled to find new, easily mineable deposits. Look for this to provide an additional boost to the current gold rally. And don’t worry about timing… Our friends over at Casey Research say it’s not too late to get in.

Does the Trump Travel Ban Make Sense?: Last week, a federal judge blocked President Trump’s travel ban against people from seven countries the United States considers havens for terrorist groups. The mainstream press has been hot with rants and raves over this issue. Longtime PBRG friend Bill Bonner applies his revolutionary new formula to score this policy… And the outcome may surprise you…

Editor’s Note: Do you think President Trump’s travel ban is a good idea? Share your thoughts with us right here.