Editor’s Note: Gold shot up 5% in January, its biggest gain since June 2016. Is this a rally or just a head fake? Longtime Daily readers know whenever we want to “deep dive” into gold, we turn to our friends at Casey Research. No other research group knows more about successful natural resources speculation…

That’s what one of my students said to me in the summer of 2008. I was teaching one of my seminars on entrepreneurship, that time in the Republic of Georgia. Gold had risen for seven years and was trading around $800 per ounce.

This student was a very bright Azeri fellow, business savvy and economically astute. But also a product of his education. He said it was foolish to buy gold, which had no real use, when it had become so expensive.

I told him, and the whole class, to watch what happens to gold when everything almost everyone thinks they know about economics gets called into question.

They had that opportunity a few months later, in the crash of 2008.

As you may recall, gold initially took a hit. There were margin calls and fund redemptions left and right. Jobs disappeared and money vanished into thin air. People were forced to sell anything anyone was willing to buy. That included gold—which dropped to almost $700.

My student wrote a snarky email asking me if I still thought buying gold was a good idea. I wrote back, saying that those who bought before the crash and didn’t panic would come out well before long. And I told him that buying (more) while its value was manifestly up and its price was down was an even better idea.

I remember readers writing in to ask what was wrong. Gold was supposed to be protecting them during a crisis, not falling with everything else. The best-of-the-best gold stocks went on sale with all the dreck. I told subscribers to stay disciplined and, as Casey Research founder Doug Casey likes to say, “Back up the truck for more.”

In truth, gold was doing its job. People whose paper wealth evaporated but who were lucky enough or smart enough to have bought gold had a liquid asset they were able to use to cover emergency needs. Many of those who’d dismissed gold were wiped out. It was an educational reality check.

As soon as the immediate liquidity crunch passed, gold made a sharp reversal upwards. It finished the year in the black, when almost everything else was drowning in the red. The best-of-the-best gold stocks rebounded as well, then pushed on to new highs in 2009, 2010, and 2011 as gold went screaming up to $1,900 per ounce.

I ran into my student at a conference in Italy in 2009. To his credit, he admitted that I was right. To their credit, many of my readers who bought with me during the crash of 2008 made spectacular profits in the following years. And they deserved to. They took what felt like a huge risk when few others had the courage.

The point of this story, today, is that those who bought after the initial rebound, in 2009 and 2010, also did extremely well.

Below is a table showing the ticker symbols of every stock we recommended as one type of buy or another in the December 2008 edition of the International Speculator, and their gains from then until early 2011, when gold stocks were peaking. (Note: gold stocks peaked before gold did.)

These facts are worth remembering because many people seem to think they have missed the boat. If the bottom at the end of 2015 was like the bottom in late 2008, then 2016 was like 2009, and there’s plenty of money to be made buying the right stocks now and going forward.

How much higher can it go?

The chart below provides some perspective. It shows the rise of gold in past bull markets and the current gold bull thus far. They are all shown starting from the current bottom in late 2015, so the past lines extend into the future. 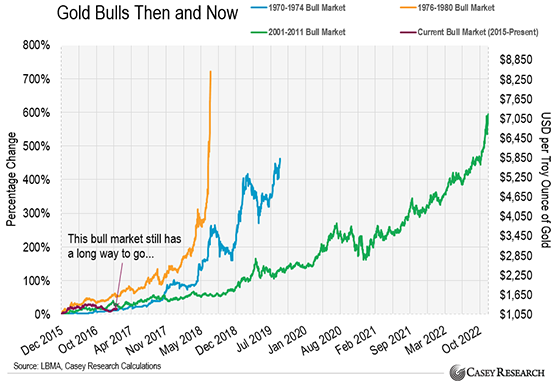 The current bull is that little purple worm in the lower left. As you can see, it has a long way upward to go just to match the smallest of the past bulls.

Key point: if we are truly in a new bull market for gold, it would be a statistical rarity for it to finish anytime soon, or anywhere near current price levels.

This is important to keep in mind if we get a big correction soon. As you can also see in the chart, it’s not uncommon for gold to spike and retreat in the midst of a sustained bull run. That means gold could retreat below $1,100, and it wouldn’t be unusual.

It would, in our view, be a buying opportunity.

Does that mean you should wait for a correction before buying anything?

No. Buy on down days for gold, certainly. There’s no need to pay more than you have to, even for a stock with tremendous potential. But if you wait for a correction and it doesn’t happen, you’ll be kicking yourself later.

There is no such thing as a sure thing in speculation, but I’m convinced there are huge profits to be made in gold for years to come. I hope you’ll join us for the ride.

Editor’s Note: Recently, Louis visited a massive deposit in Western Canada called the “Red Gold” mine. And he saw gold veins as thick as his thigh running through the entire wall of the mine. He’s never seen anything like this before…

This gold mine will go “online” in the next few months, which could push up the stock price of this company quickly and return investors 1,000% or more in the long term. But hurry. Time is running out… You can get the full details on this incredible story right here…

Next up: Energy companies.

PBL editor Teeka “Big T” Tiwari has been at the forefront of this trend. Just last week, Big T returned from the Blockchain Expo in London. And he says there’s a mad dash of industries rushing into blockchain technology.

The latest is a major utility company. It’s using blockchain technology to allow you to recharge electric vehicles at a fueling station—without even leaving your car.

In today’s must-see 3-Minute Market Minder (transcript here), Big T reveals who this company is and how its technology will work.

Two Converging Trends, One Exciting Idea: As “Big T” tells us, the blockchain is breaking down doors into new industries. Now, the blockchain is joining another new tech trend we’ve been buzzing about: Virtual reality. Augmentors is a blockchain-based game in which you can build characters and do battle with your opponents in virtual 3D. The game runs on its own cryptocurrency. It’s another reason why we’re bullish on both trends.

Meanwhile, PBL subscribers can read our latest play in the $90 billion “virtual reality” space in our just-released February issue.

A Walk Down Hackers’ Row: The number of major hacking incidents (30,000 or more records) has skyrocketed over the past decade. Hackers have hit every industry, from banking to adult websites… and famously the 2016 Clinton presidential campaign (over 5 million records stolen). If you want to see if any website you frequent has been a target of a major hack, check out this mind-blowing infographic. You have to see it to believe it…

Why You Need Your Own Personal Alamo: The world is very unstable right now… and it’s never been more important to have an escape hatch. That’s why our friends over at Casey Research say you should consider leaving your home country to sit out an economic or political crisis. In fact, legendary gold speculator Doug Casey has already built his own personal Alamo. Click here to read why he considers it a form of “freedom insurance”… and why everyone should have some of their own.

From Ted T.: How safe is Coinbase to store your digital currencies?

Palm Beach Letter subscribers interested in using Coinbase can watch our cryptocurrency video guide. In the tutorials, you’ll find answers to our most commonly asked questions about cryptocurrencies.

Do you see the reddish rock covering the entire mountain below? That’s actually a field of gold ore—a mile wide…

Below it is a high-grade deposit containing more gold than the Australian government has in its possession. Almost $9 billion worth of gold… according to current estimates…

To hear more about the mystery behind this discovery, click here…