Nick’s Note: Last week, I told you that the rise of solar power will increase the demand for certain metals, especially cobalt. But that’s just the beginning. My colleague, International Speculator editor David Forest, says cobalt is in a major super cycle.

David’s done everything in the mining business, from working as a field geologist to running the show as a mining executive. He’s our go-to guy when it comes to natural resources. If you want to add some commodities exposure to your portfolio, read on…

We gathered in a small office on the second floor of our Delray Beach office building.

I took a seat and pulled my mug of coffee closer.

Everyone looked at me expectantly.

I looked out the window, pausing a moment before replying.

I knew what I was about to say would sound odd—even crazy.

But it was the truth.

“Cobalt,” I said. “That’s going to be the biggest story of the next two years.”

You see, I’d flown to Florida to meet with the top researchers, analysts, and strategy-makers of Casey Research. This was just a few months after I’d traveled to a completely different part of the world—the Uruguay beach resort of Punta del Este—to meet with Doug Casey himself and discuss the coming super-boom he sees in commodities.

Doug recommended that I then sit down with the top people at the head office to flesh out specific ideas on which particular commodities were likely to see a cyclical spike in price soon.

At the time, many analysts were talking about gold. The yellow metal had just come off a great year, where its price jumped from just over $1,000 per ounce to over $1,300 in a matter of months.

Copper was also doing well. And zinc was a big story, with the price surging to a 10-year high on global mine shutdowns.

Many analysts would have named these as their top picks… extrapolating the trends into the future and assuming that commodities rising now would continue to go up.

You see, I travel around the world looking at mining, energy, and other commodities projects. For example, I just returned from a remote island in the South Pacific where I was looking at ways to invest in vanilla (one of the world’s best-performing agricultural commodities recently).

One of my other recent trips was to the south-central African nation of Zambia. I went to look at emeralds.

But while I was there, it was another metal that caught my attention.

Zambia is one of the world’s largest producers of cobalt. And the country lies just south of the world’s number one cobalt mining country, the Democratic Republic of the Congo.

As the chart below shows, the DR Congo produces 60% of the world’s cobalt. Most of this comes as a byproduct from copper mining—with the cobalt being chemically bound up in copper ores. 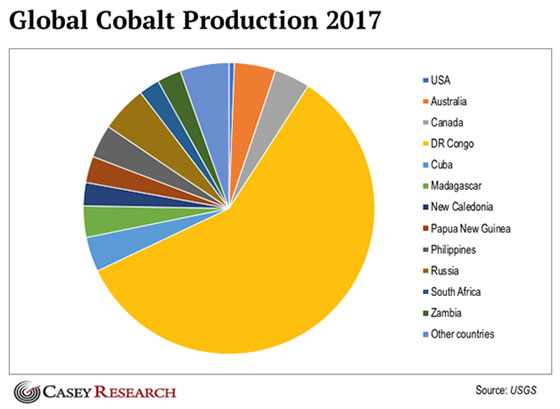 Touring the Copperbelt here—the area where all this mining takes place—I was amazed that so much of the world’s supply of this metal comes from one single spot on Earth.

That kind of concentration of a metal within one nation has triggered some of the biggest commodities bull markets I’ve seen during my career… for example, rare earth elements—used in the manufacture of cell phones and other high-tech devices. Like cobalt, the majority of rare earth elements are produced in just one country: China.

That became an issue in 2010 and 2011, when China suddenly and unexpectedly banned the export of rare earth elements.

Buyers globally were left with virtually no supply. And the resulting scramble to secure the metals drove the prices of some rare earth elements up as much as 40-fold in less than a year.

It was a spectacular melt-up. Rare earth elements stocks had an equally stellar run, rising over 1,000% within months in many cases.

With the rare earth elements experience in mind, the fact that one nation—the DR Congo—controls 60% of cobalt supply stuck in my head.

So when the team at Delray asked me what metal was next for a run, I told them, “Cobalt is going to be the world’s best-performing commodity.”

But I predicted that this was just the beginning.

At the time, still very few people had heard about this metal.  I predicted that this was going to change as the story went mainstream that cobalt was one of the biggest components of batteries for the current electric vehicle revolution.

Price-wise, that’s played out exactly as a I thought. Since my call, the cobalt price has continued to rise steadily, topping $41 per pound at the time of this writing.

But I made another prediction at the time, which I believe is going to continue to power cobalt prices higher.

I’ve seen such funds buying before during major commodities cycles. It happened in uranium in the mid-2000s, when buyers globally created funds to buy physical uranium.

That surge of investment money inflated uranium prices by over 600%.

And I believe the same thing is about to happen in cobalt.

For that reason, cobalt has been a focus for me in my International Speculator newsletter. I’ve been scouring the Earth for the best companies that mine and produce the metal—and also, for exploration companies that could reap big windfalls by making a new discovery of this increasingly precious commodity.

I believe we’re just in the early innings of this story—and multi-bagger gains of the kind we saw in rare earth elements and uranium are very possible, as more buyers pile into this tiny market.

P.S. I just published a new special report called “The Cobalt Blueprint: How to Earn 86,900% Gains From America’s Next ‘Super Metal.’” I’m making this report available until June 15. You can learn how to get your copy right here.

A former corporate banker says the secret on this 3×5 index card may be the biggest breakthrough of his career. 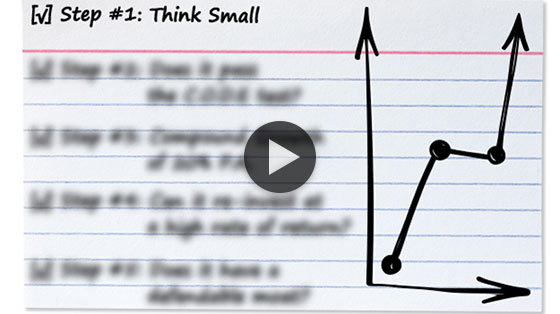