A Super Spike window is an investor’s dream come true.

As a reminder, Super Spikes are periods in history when hard asset prices surge violently. These spikes make investors who position themselves early rich.

And they’re getting bigger in recent years.

See below for proof…

I’ll tell you in a moment which commodity just became the latest to explode higher.

But first, let’s address a question I’m getting asked a lot…

Why are hard assets bursting higher all at once these days?

It’s because we’ve entered a Super Spike. That’s a reliable window when commodities spike, one after another. It’s a “roiling boil” of profits.

So you can jump into one asset, book big profits on a Super Spike, then jump into the next one primed for takeoff.

Most importantly: Super Spikes have a pattern. They repeat throughout history.

The gains come fast and furious.

Take another look at the chart I showed above. That’s a classic Super Spike.

Rising liquidity and money supply. The commodity in the chart above directly benefited from COVID stimuli and the global economic rebound.

Investor enthusiasm. This commodity suddenly became a favorite amongst passive funds lately (although individual investors are still ignoring it).

Major shifts in society. This asset is critical in battling the massive supply chain issues prevalent around the world today.

“X-factor” events. The Russian invasion of Ukraine sent this asset into overdrive.

Extreme supply shortages. A weird twist on the Russian invasion caused the supply of this commodity to dry up.

When all of these come together, you get a Super Spike. 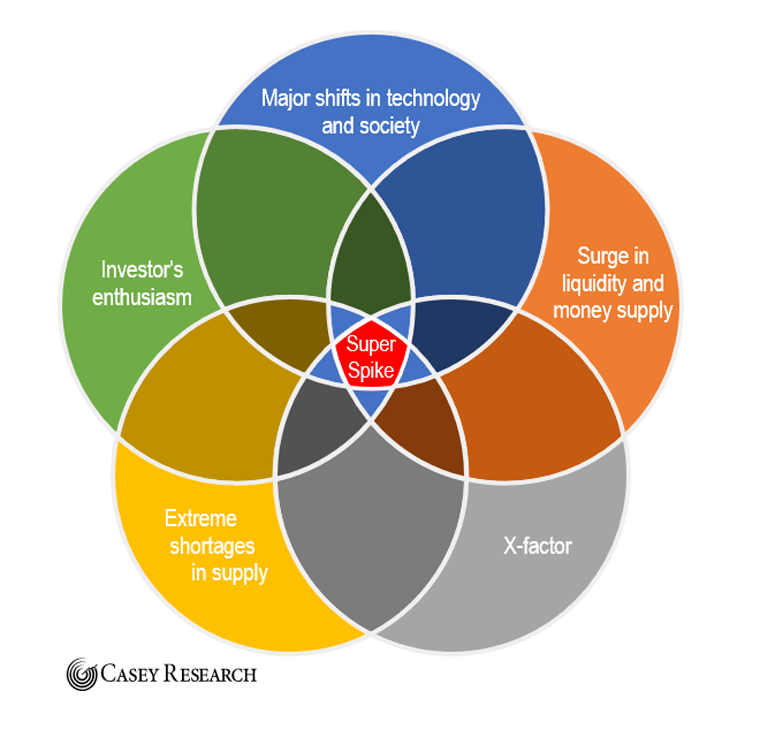 Depending on where you live, you might even use this stuff regularly. If so, you’ve probably noticed the Super Spike firsthand.

No more suspense – I’ll tell you exactly what we’re talking about.

Why Diesel Is Surging Up

In recent weeks, diesel prices exploded. The chart I showed is for the “3-2-1 Crack Spread.” This is an insider indicator showing the price of diesel (and gasoline) compared to oil.

We all know oil’s been surging lately. It enjoyed the beginnings of a Super Spike in the past year.

But the rising Crack Spread shows diesel prices are spiking faster than oil.

And it’s all because of the Super Spike factors I explained.

First, global supply chain issues mean we need a lot of stuff transported – fast. The easiest way to deliver all that is with diesel trucking.

At the same time, diesel supply has dried up.

That’s because of the Russian invasion of Ukraine. But not for the reasons you’d think.

Neither Ukraine nor Russia supplies us with much diesel. But they produce another critical asset: natural gas.

That’s because natural gas is used to make diesel. Refineries use hydrogen from natural gas to remove sulfur and clean their diesel fuel.

With diesel skyrocketing, transport costs increase around the world. That means any commodity shipped by road or rail is about to get more expensive.

That’s pushing up iron ore, coal, and copper. I’m watching for these hard assets to surge higher in the coming weeks.

Now’s the time to position for these big moves. Knowing what’s coming next, we can invest on the cheap – and ride the Super Spike wave when it hits.

How to Position for the Super Spike Window

To teach you how to benefit, I’m holding a free special event. I’m calling it The Super Spike Summit.

Join me on June 8 at 8 p.m. ET for a full evening covering my Super Spike blueprint.

I’ll show you all my research on past Super Spikes, the massive profits made, and why I believe the current spike could be three times bigger than anything we’ve seen before.

The signs are clear. The Super Spike window is here.

Most investors will miss it. But if we act now, we’d have the chance to grab the biggest gains from this once-in-a-generation event.

Don’t miss out. This is going to be one for the ages.

P.S. Be sure to put your name down right here for my VIP reminder service… I’ll send you a free gift – the Super Spike Blueprint – just for signing up.