Nick’s Note: Bitcoin is up 1,700% this year. That massive price rise has attracted hundreds of thousands of new buyers. Those new buyers have pushed the price even higher… attracting even more new buyers. Below, colleague and Palm Beach Letter crypto analyst Greg Wilson explains how this snowball effect will boost bitcoin to new highs…

There’s over 2.3 million applications in Apple’s App Store. And recently, the Coinbase app surged to No. 1.

Coinbase is a one-stop shop for buying, selling, transferring, and storing digital currencies.

Founded in 2011 by Brian Armstrong and Fred Ehrsam, Coinbase is the largest bitcoin exchange in the United States.

In fact, after a fundraising round in August, it became the first digital currency startup to attain the “unicorn” title.

A unicorn is a start-up valued over $1 billion. The August raise put Coinbase’s valuation at $1.6 billion.

Here’s why I’m telling you about Coinbase…

Becoming one of the most popular apps on the App Store is an early indicator that Metcalfe’s Law is kicking in.

Metcalfe’s Law is a theory of network effects. It states that the bigger the network of users, the greater the value of the network.

Think about the telephone as an example…

Here’s what’s important: When Metcalfe’s Law kicks in, you can make great profits.

In a moment, I’ll show you how Metcalfe’s Law will boost bitcoin higher. But first, let me show you how it worked with two other networks.

As more customers use apps from the Apple store, the entire Apple ecosystem becomes more valuable.

Take a look at the chart below. It shows the growth of Apple apps versus its userbase (measured by iPhone unit sales). 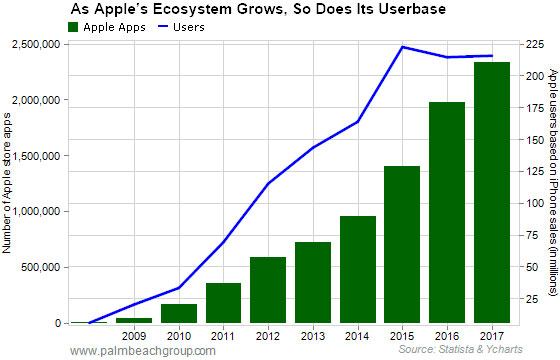 It’s clear that as the Apple app ecosystem has grown, so has its userbase.

As a result, the value of Apple has exploded. Its market cap grew from $100 billion at the end of fiscal 2008 to over $880 billion today.

As more people use Facebook, the social network attracts new users. And those new users attract even more users. It gets to a point where you put yourself at a disadvantage if you don’t use the network.

Facebook now has over two billion users—double the amount from five years earlier. And that’s brought tremendous value to its network. Facebook is worth over $500 billion today. Five years ago, it was less than $50 billion.

We’ll see the same pattern play out in bitcoin. After all, at its most basic level, it’s a distributed network.

Put another way, it’s a network subject to Metcalfe’s Law.

Bitcoin’s Network Effect Is Kicking In

Coinbase reaching No. 1 on the App Store is our signal that Metcalfe’s Law is kicking in for bitcoin.

And as more people use bitcoin, its value will continue to grow.

Consider the following statistics, which show how its network is growing:

Keep in mind, mining requires serious investment. Not something you’re going to do as a fad.

As with Apple and its App Store, the number of bitcoin users is growing rapidly. The chart below shows the growth of Coinbase users in the last year. 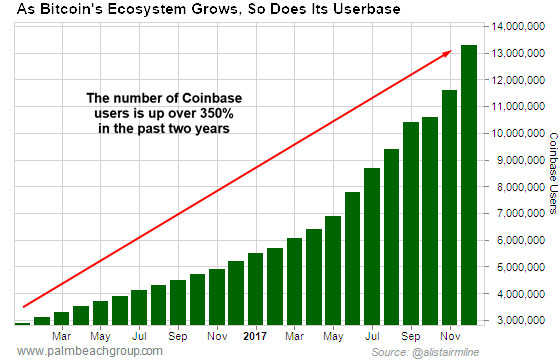 As you can see, Coinbase users more than doubled this year.

Meanwhile, we’ve seen bitcoin’s value grow from $16 billion at the start of the year to over $300 billion today.

The good news is that it’s just getting started. Bitcoin’s network effects are taking root, and it will exponentially increase the value of the network.

Don’t miss this opportunity. Get your foot in the door and buy some bitcoin today.

Solar advocates have touted it as the energy of the future since the 1970s. But it’s never really taken off. The reason is simple—solar was too expensive. But that’s changing.

As we told you on October 25, solar will soon be the cheapest form of energy in the United States—cheaper than coal, nuclear, wind, geothermal… everything.

But it’s not just the U.S. that’s expanding its solar energy usage…

China plans to install 1.3 billion solar panels over the next three years. If that happens, China will double the number of solar panels on the planet.

That’s good news for the solar industry. As you can see below, TAN is up 9% since we wrote about it in October. 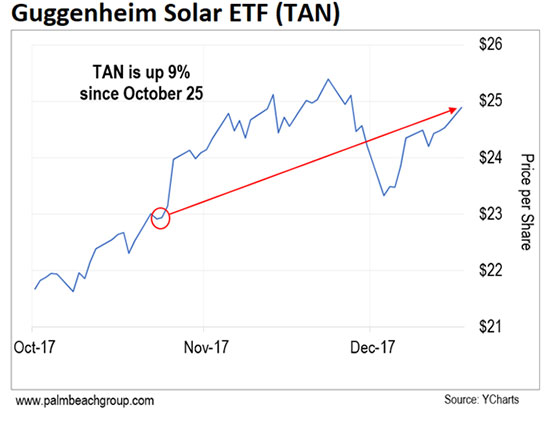 But this move is just the beginning. As the U.S. and China expand their solar grid, this industry will thrive.

Because on the 3×5 index card below is an investment method that a corporate baking insider spent three years and $138,545 developing. It’s a blueprint he believes you can use to find stocks that can return 10-to-1 on your investment. 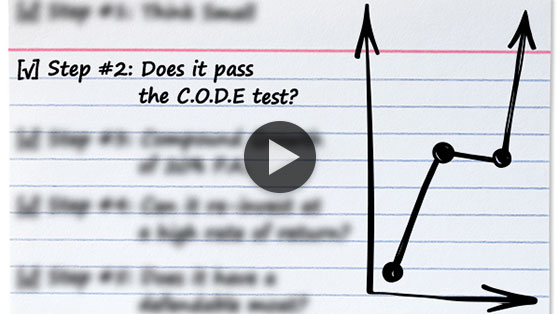