Nick’s Note: When it comes to covering cryptocurrencies, no one in the business knows more than Palm Beach Confidential editor Teeka Tiwari. Today, Teeka reveals another mainstream moment for bitcoin.

VanEck is one of the biggest asset managers in the United States.

The firm opened in 1955. And in 1968, it launched the VanEck International Investors Gold Fund (INIVX), the first U.S. gold fund.

The company offers more than 50 ETFs. And it manages assets for over 400 institutions—including banks, pension funds, and endowments.

Here’s the thing about VanEck…

It specializes in precious metals. Most of its assets are gold investments. And it runs some of the world’s largest gold funds.

But now the company is making the jump into bitcoin.

On August 11, VanEck filed with the U.S. Securities and Exchange Commission (SEC) for the VanEck Vectors Bitcoin Strategy ETF.

The fund would initially invest in bitcoin futures contracts and trade on the Nasdaq.

It’s no surprise VanEck is launching a bitcoin ETF. The cryptocurrency has vastly outperformed gold this year (see chart below). 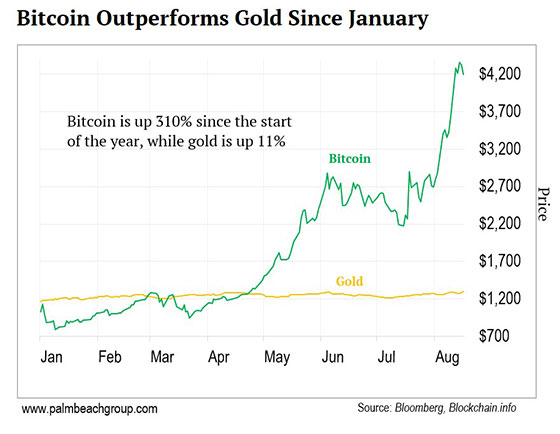 As you can see, bitcoin has crushed gold this year. Bitcoin is up 310% since January, while gold has gained only 11%.

Don’t get me wrong. I like gold. I own it and suggest that my subscribers have a portion of their assets in gold.

But the global gold market is already worth $7 trillion. With a market that size, it just can’t compete with the profit potential of bitcoin.

Bitcoin has a market cap of just $66 billion. It doesn’t have to displace gold to rise another 10 times from here.

It just needs to become an alternative “chaos hedge,” and we could see bitcoin at $40,000 per coin.

We’re already seeing bitcoin become a safe-haven asset in crisis-stricken countries like Venezuela, Greece, and Cyprus. People are turning to it to protect their wealth from inflationary government policies and capital controls.

The smart operators at VanEck understand the potential of bitcoin. Not only is it a great investment, but it’s also a safe haven like gold.

That’s why they are pushing ahead with their own ETF. Here’s what VanEck said about bitcoin:

VanEck believes that the technology underlying digital assets, known as distributed ledger technology [blockchain], has tremendous potential to revolutionize finance and trade. Digital assets are an investable asset class in their own right and continue to be integrated into the broader economy.

Don’t let all that high-minded talk fool you.

The folks at VanEck see the upside potential in bitcoin.

We don’t know whether the SEC will approve this ETF. But this is the latest evidence that bitcoin is becoming mainstream.

As more people adopt bitcoin, we could see a price of $5,000 this year.

We remain very bullish on bitcoin. You should own some today.

P.S. Tonight at 8 p.m. ET, I’ll be hosting a live Q&A session and sharing the top cryptos on my watch list… You can submit a question to me in advance right here.

Plus, my team has set aside $100 worth of bitcoin per attendee. But you can only claim your stake if you attend tonight’s webinar. Click here to reserve your seat today.

Everything’s Going to Be Alright

The stock market doesn’t crash when everybody is looking for it to happen.

Crashes also don’t occur when the S&P 500 is trading just 2% below its all-time high.

So if you’re worried about a huge drop in the stock market over the next few months… stop worrying. Everything is going to be alright.

The stock market is vulnerable to a decline of 5­–7% over the next few weeks. We are headed into a seasonally weak period for stocks, after all. And it feels like forever since we’ve had at least a 5% pullback in the market.

So a move down toward 2,360 or so on the S&P 500 seems like a reasonable target between now and the end of September.

But if you’re looking for a stronger pullback than that, I just don’t see it happening—not yet, anyway.

You see, all the important moving averages (MAs) for the S&P 500 are still in a bullish configuration. And history tells us that stock market crashes just don’t happen with this setup. 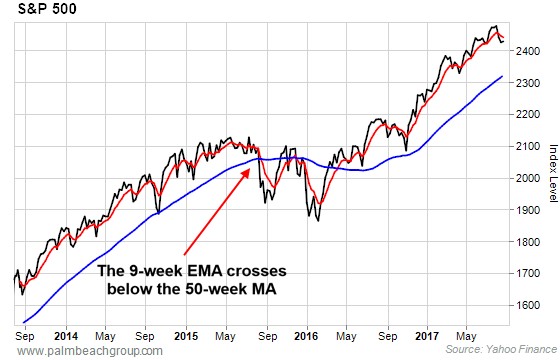 The last significant correction in the S&P 500 occurred back in August 2015. That’s when the 9-week exponential moving average (EMA)—the red line—crossed below the 50-week MA—the blue line.

That’s a bearish cross. And stocks entered a five-month-long downtrend that knocked 6% off the S&P 500 by the time the market bottomed in early February 2016.

A 6% decline certainly does not qualify as a “crash.” Heck, it’s barely worth calling it a “correction.” But the point I’m trying to make here is that the “correction” occurred after the 9-week EMA and the 50-week MA had coiled together. That’s what created the setup for a bearish move.

We don’t have that potential for a bearish setup right now.

The 9-week EMA is currently more than 100 points above the 50-week MA. There’s almost no chance of seeing a “bearish cross” over the next month or two.

P.S. If you want to read more trading insights like this… click here to receive my free Market Minute newsletter at 7:30 a.m. ET every trading day.

Can this tiny microchip prevent 90% of car accidents? 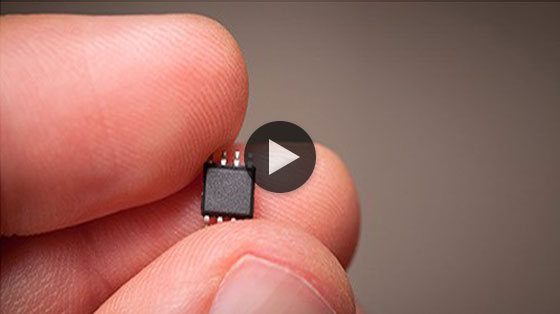 The U.S. government thinks so…

And it’s on the verge of requiring this part to be in every new American-made vehicle by the end of 2017.