The late John D. Rockefeller is the richest man in modern history. That could change soon…

Even if you’re not a history buff, you’ve probably heard of John D. Rockefeller. He was the business magnate behind the Standard Oil monopoly.

Rockefeller founded Standard Oil in 1863. By 1890, the company controlled nearly 90% of the U.S. oil market… making it one of the country’s biggest monopolies ever.

In 1913, Rockefeller’s estimated net worth was $350 billion (inflation-adjusted). That made him the richest man in the world at the time—a title he still holds.

Today, there’s another American magnate who could dethrone Rockefeller’s place in history.

He’s Jeff Bezos, the CEO of Amazon. According to Forbes, Bezos is worth nearly $100 billion. That makes him the richest man alive.

And he’s getting richer.

I’ve predicted in the past that Amazon could be the first U.S. company to reach a $1 trillion market cap. If that happens, we could see Bezos catch or surpass Rockefeller in net worth. If not, he’ll come close.

There’s a reason Bezos is following in the footsteps of Rockefeller—monopolies make a lot of money.

Today, the biggest companies in the world are “modern monopolies.” And they’re all growing. I’ve been pounding the table about these companies since May.

If you haven’t bought into them yet, here’s why you should…

What Are Modern Monopolies?

In May, I told you the five largest U.S. companies by market cap were Facebook, Apple, Amazon, Microsoft, and Google.

All five have one thing in common: They’re platform companies.

They define platform companies as ones that “allow consumers and producers to connect with each other and exchange goods, services, and information.”

Although they are similar in size and market dominance, Moazed and Johnson say platform companies have little in common with their predecessors.

Since they don’t own the “means of production” like old monopolies, platform companies don’t have the ability to shut out competitors.

What they do own is the “means of connection.” That gives them indirect control over producers and consumers. And that’s what makes them modern monopolies.

Bezos’ Amazon is the best example of this.

Anyone who wants to sell something can post their product to Amazon’s website. Then, millions of customers come to Amazon to buy those products.

The company routinely sells 300-plus items per second. No other business can boast those types of connections. That’s why Amazon controls 90% of the online retail market.

This is the business model of the future. And it’s going to make investors a lot of money.

Since I wrote about platform companies back in May, their prices have soared. 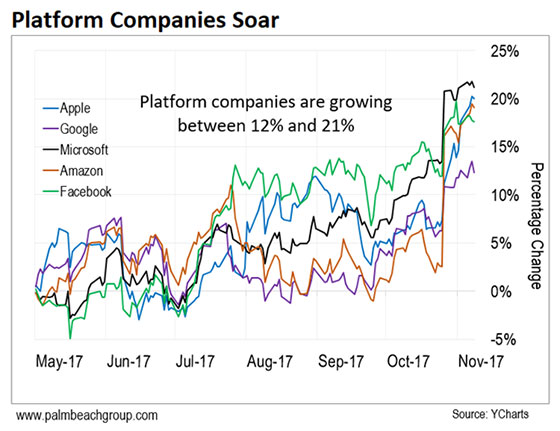 And they really took off in the past two weeks as they reported stellar earnings.

These platforms are increasing profits at astounding rates. Apple is the laggard… and it’s still growing profits by 25%.

Analysts expect these stocks to grow profits by 70% this fiscal year. And profits aren’t the only thing growing… so are revenues.

Except for Google (which stagnated this year), the other four platform companies are growing the top line by an average of 28%. That’s unheard of for companies of their size.

The next two biggest U.S. companies are Berkshire Hathaway and Johnson & Johnson. They’re only growing sales by an average of 8%.

These modern monopolies will continue to outperform the market for the remainder of the bull run. Just buy them… You’ll be glad you did in a couple years.

From Mark S.:  I was very disappointed with this past Thursday’s emergency webinar held by Teeka Tiwari. You wasted over an hour of my time when you didn’t notify us upfront that this was just a sales promo. The only thing possibly useful was the recommendation Teeka made. I can’t spend $2,500 upfront on a possibility. I would not even spend $50 for what was offered.

From Robert D.: I have a complaint. If these investments are so good, you guys would invest your own money and make a profit, then share that information for free. All I see is a group of people who want to scam money for every bit of information from desperate mom-and-dad investors who will never be able to get ahead without some expert help. I don’t see you or your group helping others. You’re just helping yourselves.

Nick’s Reply: Mark and Robert, as much as we love positive feedback, we appreciate the critical comments, too. Unfortunately, complaints like yours will never go away. They’ve always been a part of our business, and they always will be. It’s like the ending line in that old saying: “… you can’t make all of the people happy all of the time.”

But, based on the responses we’ve received, most of the nearly 100,000 people who attended Teeka’s webinar were pleased with what they heard. And that’s why we do what we do.

We host our webinars at tremendous cost. And we allow anyone who wants to attend for free, even though other cryptocurrency seminars and conferences cost hundreds, even thousands of dollars to attend. So yes, at the end, we invite you to subscribe to our service because subscriptions are how we keep the lights on.

Different people have different investing styles. That’s why we’re adding new services to the Palm Beach Research Group lineup. Maybe another one is better for you. Maybe none are. But until you find the one that feels right for you, we hope you continue to enjoy the free wisdom we provide every day here at the Daily. And if that isn’t right either, there’s a link to unsubscribe at the bottom of every issue. We’ll be sorry to see you go, though.

Tonight at 8 p.m. (ET), Teeka will make a major announcement about his research service. He’ll also be answering your most burning questions about cryptos.

You can click here to submit your questions… (U.S. residents can also sign up for a courtesy text reminder.) 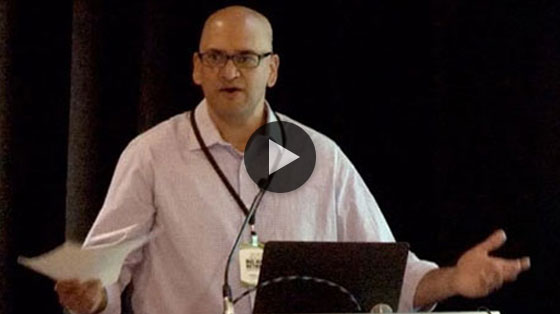