Nick’s Note: At the Daily, we’re always trying to stay in front of big, profitable trends… And one that we’re excited about comes courtesy of PBRG friend and Strategic Investor editor, E.B. Tucker.

In today’s essay, E.B. explains why we’re entering “the biggest energy shift of our time”—and how it’s opening the door to a huge money-making opportunity…

A society is only as strong as its access to supplies of reliable energy. While the source of that energy changes over time, one thing doesn’t: Controlling the supply of that energy is as close to printing money as you’ll ever get.

Throughout time, the richest barons in history sold society its energy.

During the last century, oil fueled society. Barons like Jean Paul Getty made so much money supplying society with oil, the wealth became a burden. From the Rockefellers to the Saudi royals, the story is the same. Controlling the supply of energy is equivalent to a levy on the entire economy.

Before oil, it was coal. Coal created scores of 19th-century fortunes. Even Andrew Mellon, who later became Secretary of the Treasury and the third-largest taxpayer in the 1920s (behind Rockefeller and Ford), got his start in the coal business.

The same trend stretches all the way back to medieval days, when wood provided heat, a cooking flame, and lit rooms. The lords who owned the forest set the price for warmth, hot food, and light.

And today, we’re on the dawn of a new era in energy.

Last century was the oil era. From Ibn Saud, Rockefeller, Getty, and even shale oil tycoons like billionaire Harold Hamm of Continental Resources, the oil business created trillions of dollars’ worth of wealth.

But those days are over.

Now, I’m not saying major oil companies are down for the count—they’re not. I’m also not saying billionaires like the Saudi royals are in trouble—they’re not.

What I’m saying is that over the decades to come, those families, billionaires, and major companies we know today will not see their fortunes swell. They’ll chug along. And they’ll also be surprised as new energy barons leap past them on the Forbes list.

You see, oil goes in just about every product we use today. From a tube of toothpaste to the lid on a Starbucks cup, it’s hard to get away from oil. The chart below shows how much petroleum the world uses on a daily basis: 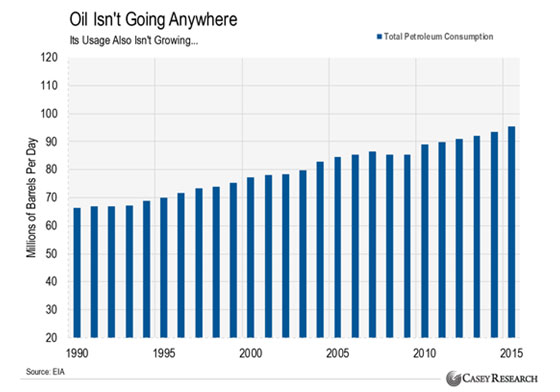 I’m sure the first thing you think when you see this chart is that the oil business must be great.

And it is—for the most entrenched players. Oftentimes, this means governments. After all, as much as 75% of the world’s oil production comes from state-owned oil companies, according to The Wall Street Journal.

What I hope you’ll see is that the oil business isn’t getting much better. For starters, climate change warriors are out to attack the business at any chance they can get. I attended a raucous anti-oil protest in Portland, Oregon back in 2016 for research purposes. 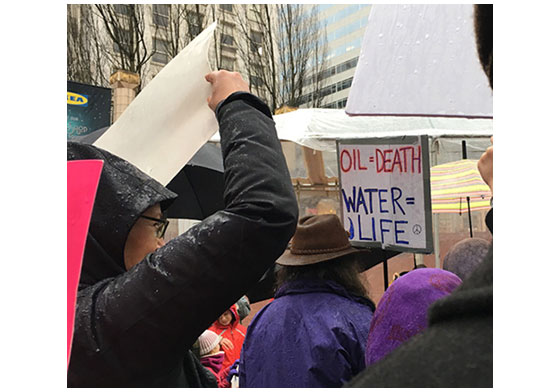 I attended a Dakota Access Pipeline protest in Portland, Oregon in November 2016

Then, take taxes into consideration. Every gallon of gasoline sold in the U.S. has a $0.184 federal levy placed on it… And some states, like Pennsylvania (the highest case), pile on as much as $0.582 per gallon on top of that. States need that money to fund their bloated budgets.

So oil is under attack from every angle.

Meanwhile, alternative power gets the opposite treatment. In some states, you can actually make money by driving an electric car or bolting solar panels onto your home.

Just to be clear, we don’t have an opinion about which energy source is better. In my newsletter, Strategic Investor, we separate our ideology from our investing.

With this in mind, we see the oil trade as old, tired, and predictably stale… and alternative energy as inevitable.

Batteries Will Be the Oil of the Next Century

And the metals that make up these batteries are creating a new “gold rush.”

Because these more advanced batteries will hand forward-thinking investors the opportunity of a lifetime—and make two things a reality:

You see, new battery technology is cutting costs in half, while also increasing storage capacity.

And that’s why the mass production and adoption of the electric car is no longer a pipe dream… It’s a reality.

Right on the Cusp of a Surge

Earlier, I showed you a chart of oil usage. While it’s a big number, it’s not growing very fast. At least, not compared to the next chart.

Oil’s 1.5% annual demand growth over the last two decades is nothing compared to the surging demand for battery capacity… 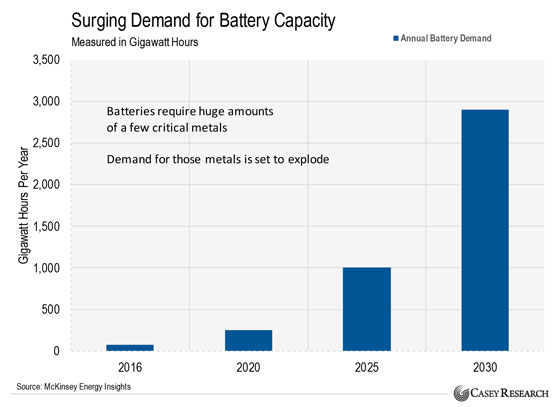 The chart above measures battery demand in gigawatt hours (GWh). To put things into perspective, in 2016, all consumer products with lithium-ion batteries added up to 45 GWh, according to The Economist. That means every cordless drill, smartphone, and even e-cigarette combined. And including all the electric car batteries produced that year adds another 25 GWh.

But by 2030, management consulting firm McKinsey & Company expects demand for battery capacity to surge more than 36-fold to 2,900 GWh per year.

And that, in turn, will create a massive spike in demand for a handful of new energy metals required to make all these batteries.

In fact, The Wall Street Journal says, “The world is about to experience its biggest shift in commodities demand since the 19th century.”

There’s no comparison. New energy sources will leap over oil’s tepid growth in the coming years. With clean energy economic incentives in place, no protesters, and technology on its side, a new energy source is set to power the future.

P.S. I recently released an important video describing everything you need to know about “America’s Third Power Shift.”

In short, the biggest power shift in the last 100 years is happening now. And it’s creating a tipping point in the next generation of energy metals. If you know where to put your money ahead of time, you could see once-in-a-lifetime gains. We’re set up to profit from this megatrend in my Strategic Investor newsletter—and you can join.

A legendary Wall Street trader has introduced an ingenious ploy to follow in the footsteps of Big Money… He calls it the “13-X Trading System.”

And you can get all the details on it right here… 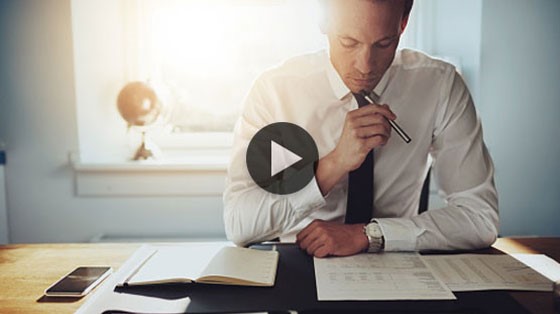