Nick’s Note: PBRG income maven William Mikula is our stealth-income-producing machine. His options service has a 100% win rate this year. Today, he shares his favorite way to profit when Wall Street panics…

Which one did we profit from? The one that crashed.

The buyout announcement had the opposite effect on national grocery chain Kroger.

Wall Street hit the “sell” button on Kroger and other supermarkets after the Amazon buyout offer went public.

That’s because Amazon has a reputation for ruthlessly cutting prices. Investors fear that if Amazon enters the brick-and-mortar grocery space, a brutal price war will ensue.

I don’t disagree with this line of thinking. And since Amazon was successful in its bid, let the battle begin.

But here’s why I’m telling you this story…

Wall Street overreacted on this news.

You see, Kroger was—and still is—generating billions in cash profits. But based on every proprietary indicator I use, it was brutally oversold after the Amazon announcement.

Today, I’ll show you how we used this classic Wall Street overreaction to make 16.7% annualized gains on Kroger… and how you can profit from similar trades.

How to Buy Elite Companies for Cheap

Imagine you could make a low-ball offer on a stock that you’d love to own… at a price you set beforehand. Believe it or not, you can do this in the stock market with a few clicks of your mouse.

When you sell a put option, you earn cash upfront simply for agreeing to buy shares in a company you like, at a lower price than they’re currently trading at.

As I explained on Friday, investors buy these low-ball offers because it provides them “insurance.” They know they’ll have a buyer for their shares no matter what happens.

This insurance is especially profitable when stocks are dropping and investors are panicking. This tends to be the case with Wall Street overreactions.

As you can see, trading these overreactions can be a lucrative—and safe—strategy. But the key is to sell put options only on profitable, shareholder-friendly companies that dominate their industries.

Now, let me show you one of my favorite ways to spot these profitable trade setups. 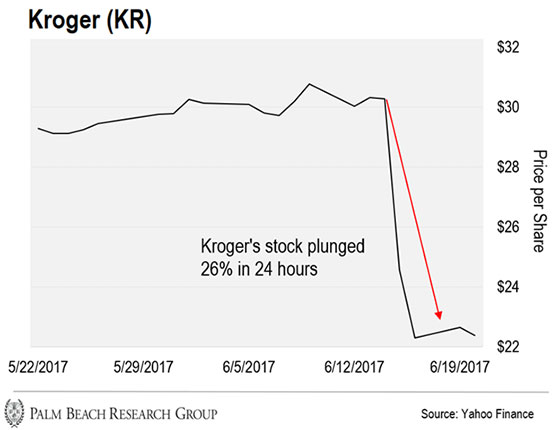 It shows what happened to Kroger’s stock right after Amazon’s announcement.

As you can see, there’s a rapid drop followed by a sharp, angled rise. I call this the “hockey stick” formation.

This “hockey stick” forms when a stock suffers a violent, quick sell-off, then bounces off its lows.

When I see this pattern, I analyze the reason behind the sell-off. If the reason for it is a one-off, solvable issue, I pounce.

Clearheaded investors (like us) can then walk over to the safe, crack it open, and, if we like what we see inside, make a low-ball offer.

This allows us to earn thick streams of cash. Then, we can close our trade after the panic subsides and normality returns to the stock.

This is exactly what we did with our trade on Kroger.

On August 8, 2017—less than two months after we made our low-ball offer—we closed this trade for a 2.2% gain. That translates into a 16.7% annualized return. It was a great result considering the mainstream narrative was to run far away from the supermarket giant.

Now, since I only recommend trades on the strongest, most dominant companies on the planet—trading at cheap valuations—these charts are relatively rare.

But as you can see from our overall track record—and our trade on Kroger—“hockey stick” patterns can be very profitable if traded correctly.

As you can see in the chart below, the discount store giant is carving out a perfect “hockey stick” pattern… 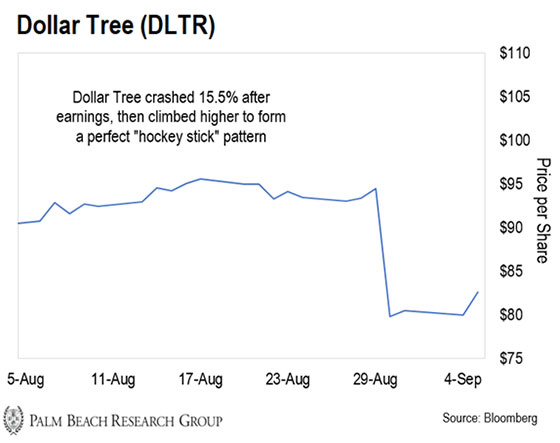 The company was punished recently after announcing second-quarter earnings that narrowly missed Wall Street’s expectations. But for Dollar Tree, this is just a temporary speed bump.

Thanks, in part, to its acquisition of Family Dollar in 2015, revenue is up 184% over the last five years. Net income has tripled to $1.7 billion. And my favorite metric, free cash flow, has grown by 89.6% in the same period.

If I were considering this trade, I’d look to enter around $83 or below… and enjoy the ride higher. If Dollar Tree recaptures its price level from two weeks ago, that’d be a 13.8% gain.

As always, do your own research before putting any money on the line.

This tends to be fertile “hockey stick” ground as Wall Street reacts (or overreacts) to companies’ earnings announcements..

P.S. Making low-ball offers on companies like Dollar Tree is just one strategy to generate side income from the stock market.

This has nothing to do with crypto. Instead, Teeka’s sharing strategies the world’s most successful hedge fund managers use to generate millions of dollars every year, whether the markets go up, down, or sideways.

And to prove this strategy works, Teeka will give away three trade recommendations during the webinar. Click here to automatically register for this free event.

From Sarah C.: Aloha, Jeff. In Hawaii, orchids thrive. It is true that they do not like wet roots—especially at night. One tip that I can give you about keeping them blooming for a long time is to not touch the petals and buds—at all. It is tempting to do so, stroking them to admire or encourage the flowers, but that is the touch of death to new blooms.

From Carey A.: Regarding Jeff’s essay about his wife’s orchids… Orchid prefer distilled or reverse osmosis (RO) water. Minerals can damage them… But if you leave water in a white plastic jug—especially if it gets sun on the plastic for part of the day—even distilled or RO water will kill orchids just as you describe. That’s because orchids are extremely sensitive to the phthalates from plastics.

From Malcolm J.: In his interview, John Stossel said, “But I think the media see business as a win-lose proposition.” This statement is ignorant and silly.

Liberals see the win-lose proposition in the fact that the average CEO compensation is 327 times that of their lower-paid workers. So do I… And so does anybody with some intelligence. I suggest that you think before you speak or write.

In 2008, mega-banks misused billions in taxpayer funds. After a review of the banking industry, President Trump signed bill S.2155 into law. 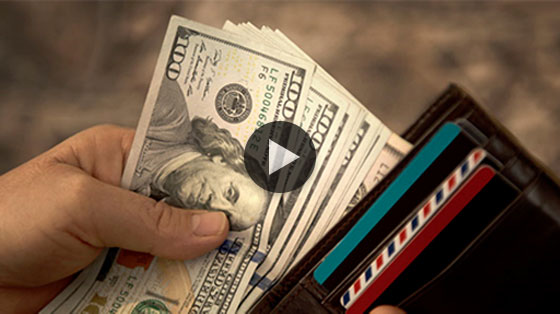