Like World Cup soccer, it only comes around every four years. But you can’t wait until it happens. You need to prepare months in advance.

Today, I’ll explain what this important event is.

And more importantly, while most people will tell you to wait until it unfolds, I’ll share why you want to position yourself well ahead of this money-making opportunity…

The “Halving” Will Cut Supply

It’s called the bitcoin “halving” event. Let me explain what that is…

There can never be more than 21 million bitcoins in existence. The issuance is strictly regulated by computer code.

Every 10 minutes, bitcoin “miners” compete with each other to solve a complex mathematical problem. Whoever solves the problem first is awarded 12.5 bitcoins.

A halving event is when this bitcoin reward is cut in half. So each halving reduces supply coming to the market. The first halving occurred in 2012, and the second in 2016. The third will occur in 2020.

And the halving will continue roughly every four years until all 21 million bitcoins are released. As I mentioned, the next halving is estimated to occur next year in May—about eight months away.

We first wrote about the bitcoin halving in January 2019.

And our research shows bitcoin prices reach their bottom about 472 days prior to the halving events. It also shows that once the halving occurs, the price rally continues: 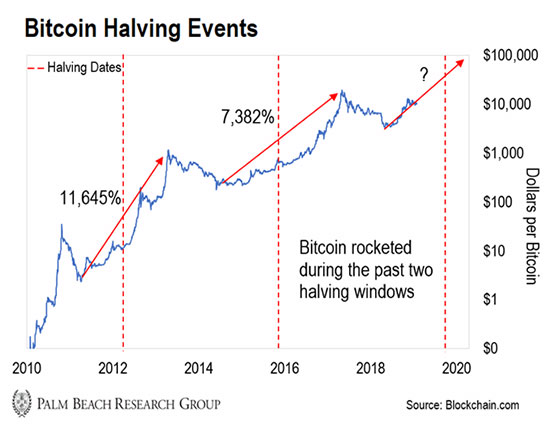 As you can see in the chart above, bitcoin bottomed roughly 15 to 16 months prior to each of the first two halving dates. But it rallied for a year or more after them.

That’s why you don’t want to wait until the halving date to buy bitcoin.

If you’d invested 15–16 months before the first halving, you would’ve made 28% more than waiting until the halving date.

And if you’d invested 15–16 months prior to the second halving, you would’ve made 158% more than waiting until the halving date.

Of course, our 472-day marker passed in early February. So you’re likely wondering, is the upcoming bitcoin halving still in play?

Those who took our advice to buy bitcoin in January are now up 183%.

And you may be asking yourself, “Is it too late to get in now?”

The answer is a resounding no.

Bitcoin doesn’t just rally up to the halving… it also rallies for a year or more afterwards.

So again, don’t wait until the halving date to buy bitcoin.

This next halving happens to come at an incredible time, too. We’ll see this reduced supply right before demand explodes…

You wouldn’t know this demand was coming simply by watching bitcoin’s price action. But beneath the surface, the groundwork is being laid.

For example, SEC Chairman Jay Clayton recently said “progress is being made” to allow a bitcoin ETF to launch. We could see a bitcoin ETF before the year is out.

Another example is Bakkt. It’s the institutional-grade digital currency platform being operated by the owners of the New York Stock Exchange. It’s received all the regulatory approval to launch today. And any bitcoin stored at the Bakkt Warehouse will be protected by $125 million in insurance.

Fidelity Investments is driving hard for the same business, too. This year, it launched Fidelity Digital Assets, its cryptocurrency arm. And it’s in the final testing stage of its crypto custody platform for institutional investors.

A recent report from PwC showed that global crypto investments continue to grow rapidly (up 41% from last year), with Asia and Europe leading the way.

For example, Japanese crypto brokerage Tagomi released its borrowing and lending platform. It gives institutional investors the ability to short cryptos. And in Brazil, payments giant Cielo announced its support for bitcoin and other cryptos.

Take Advantage of This Window

Investing far head of the halving window can lead to much bigger gains than waiting for the halving to occur. Now is still an optimal time to buy.

The halving catalyst will cut supply… and institutional greed will boost demand up to 15 times. And when supply drops and demand rises, asset prices have only one direction to go: up.

This next leg up could see bitcoin surpass its old highs. Prepare today.

And always remember, bitcoin is volatile. Don’t bet the farm. You just need a tiny grubstake for the potential for life-changing gains.

P.S. Right now, wealthy investors are in a buying frenzy, preparing for the halving event. And Daily editor Teeka Tiwari has found an opportunity to take advantage of it.

He’s identified five coins with the potential to make you a crypto millionaire from the halving catalyst. He even reveals the name of the top one on his buy list right here…