Most traders are familiar with the cliché Wall Street warning, “Don’t catch a falling knife.”

You see, buying into a stock that’s falling sharply is generally a bad idea. While picking the bottom of a stock can lead to massive gains… if you buy at the wrong time, it can also lead to big losses. And frankly, most of the time… that’s what happens.

But there are times when the knife is so close to the ground—where the risk of further loss is minimal and where the potential gains are so enormous—that it makes sense to reach out and grab it.

Today, I’m going to show you how to find these setups…

Let’s start by looking at an example. Take a look at this chart of Lululemon Athletica (LULU), the sports apparel manufacturer known best for its line of yoga clothes… 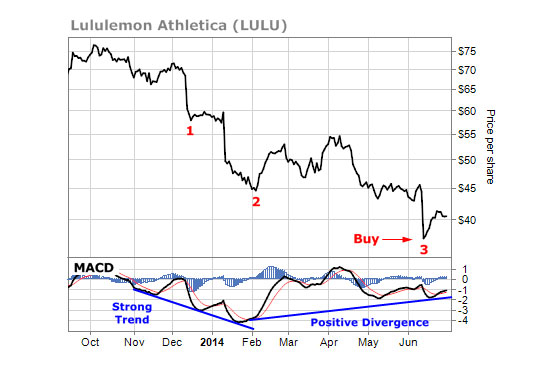 Back in December 2013, LULU shares dropped nearly 20% overnight (point 1 on the chart) in reaction to some bad news from the company.

Now, it doesn’t matter what the actual news was. The important thing to recognize here is that this was NOT a good time to buy shares of LULU. Bad news is usually NOT a one-time event. There’s almost always a second shoe to drop.

So if you want to profit from “falling knives,” the first rule to follow is: Never buy a stock on the first decline from bad news. There’s usually more trouble to come.

Sure enough, after a brief period of consolidation from mid-December 2013 to mid-January 2014, LULU once again tumbled 20% (point 2 on the chart) in reaction to more bad news.

This brings us to our second rule: After the second shoe has dropped, traders can start looking to buy—if the technical condition supports a bottom.

I like to look at the moving average convergence divergence (MACD) momentum indicator to get an idea of where a stock is likely headed next.

On the other hand, if the stock is dropping to new lows but the MACD indicator is rising, this “positive divergence” is likely an early sign that the trend is ready to reverse.

No matter how attractive the stock might look at this point, traders should avoid the temptation to buy it if the technical condition doesn’t support a bottom. There’s still more room to fall and at least one more shoe to drop.

But notice the different action in the MACD indicator at this point. As LULU was dropping to a new low, the MACD was trending higher. This is the sort of positive divergence that reduces the risk of catching a falling knife.

At this point, we had a stock that had fallen hard three times on bad news. It was trading for half the price it traded at six months earlier. And a key technical indicator was signaling that the trend was ready to reverse. This was a low-risk area for traders to buy.

And just look at what happened next… 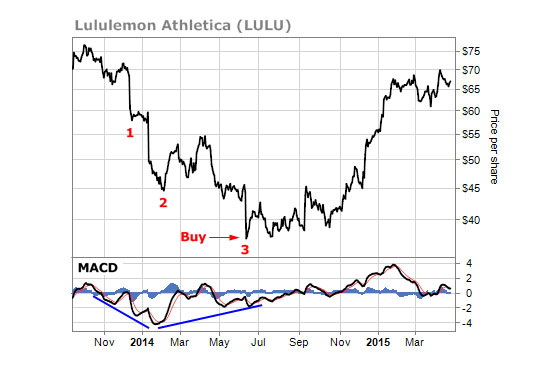 As you can see, LULU’s June 2014 low marked the bottom for the stock. But LULU didn’t mount a sustainable rally right away.

Instead, the stock chopped around for a few months in a relatively tight trading range. Then it exploded higher. Anybody who caught the falling knife in June 2014 was sitting on around a 75% gain by the following March—just nine months later.

To sum up, if you want to profit from a falling stock—there are two important things to remember:

If you follow these two rules, you can set yourself up to make big profits with low risk from falling knives.

P.S. For the past 36 years, I’ve helped all kinds of people retire rich using options. But over the past 18 months, I’ve started targeting a small group of stocks… and the results have been amazing.

Now, for the first time, I’m ready to share this strategy with you.