When it comes to calling the market, few are better than Robert Shiller…

Shiller is a Yale professor, best-selling author, and Nobel Laureate in economics.

He’s developed a system that tracks the valuation of different assets.

In March 2000, his system flashed that the stock market was near the top of the tech bubble. The bubble burst that same month…

In 2005, his system warned that real estate was expensive. Two years later, the market crashed…

In 2015, his system triggered an alert that the bond market was historically overvalued.  We’re starting to see that trend in rising bond prices unravel now…

When Shiller talks, we listen to what he says.

And right now, his system is saying investors should start taking profits on some of their stocks.

If you’re invested in the stock market or thinking of getting in, don’t take Shiller’s words lightly. Here’s why…

In the 1980s, Shiller wanted to create a better way to forecast long-term market returns. He found that looking at price averages over 10-year periods worked best.

To do that, he took the price-to-earnings (P/E) ratio and divided it by the last 10 years of earnings. The new metric bears his name: the Shiller P/E ratio.

[The P/E ratio takes the price of a stock and divides it by its earnings. That result shows how much investors are willing to pay for $1 of current earnings. The higher the P/E ratio, the more expensive a stock is.]

Shiller’s ratio is also called the cyclically adjusted P/E ratio—or CAPE ratio—because it covers more than one business cycle. This smooths out earnings fluctuations to take out the impact of booms and busts.

As you can see in the chart below, the only time stocks have been more expensive than they are today was during the tech boom in the late ’90s.

And we all know how that turned out… What the CAPE Ratio Is Telling Us

Shiller’s ratio is signaling that the broad market is overvalued. And going forward, we can expect future returns to be lower.

The chart below shows how much U.S. stocks are expected to return over the next 10 years based on the current Shiller ratio of 29.2. As you can see above, the market is expected to earn 3% real returns annually over the next 10 years.

(Real returns are adjusted for inflation. Add 2% for unadjusted returns.)

Even more worrisome… we’re less than one point away from reaching the next range. That’s when real returns on stocks go negative.

If that happens, you’d be better off buying inflation-protected Treasurys (TIPS) than stocks. You’ll be getting better real returns on a safer investment.

Shiller’s ratio is telling us that the broad market is expensive.

So if you own an index or mutual fund that tracks the market, you should take note. Over the next 10 years, you can expect little price appreciation and lower returns.

But that doesn’t mean certain stocks won’t do well…

Great stocks are still out there—you just have to look a little harder.

If you want a shortcut, check out the PBD Elite 25 for good buys right now.

You can get the free full list right here.

Universal Income for All: Experts are predicting that up to 47% of U.S. jobs may be replaced by automated systems in the next decade. Some people are proposing a universal basic income (UBI) if there are widespread layoffs due to automation. UBI would ensure every person receives a set amount of unconditional money from the government. We’re not sure exactly how UBI will work. But its merits are up for debate. Do you think UBI would solve the automation problem? Let us know right here.

Virtual Price Wars: A new virtual reality headset could cut prices of the tech by more than two-thirds. Meta recently showcased its Meta 2 virtual reality headset at a tech conference in Austin, Texas. Some reviewers are saying that Meta 2 stacks up well against the better-known Microsoft HoloLens. But at a $949 price point, Meta 2 is much less expensive than the $3,000 HoloLens hardware. Meta is still pitching its headset as a developer tool, so it’s only selling them in limited quantities. But it’s clear that virtual reality is getting to the price where its mass adoption point (MAP) cycle will kick off.

This Megatrend Is Taking Off: New megatrends are being born all the time. And one emerging industry that will soon change your life in ways you never imagined is the trend of driverless cars. The million-dollar question is… how do you make money off self-driving cars? Unfortunately, it’s not easy. But our friends over at Casey Research say there is one small-cap company you should put on your radar today…

From John P.: I like the America First Portfolio. But I have concerns about the first two picks: Southwest Airlines and Altria.

Trade wars will be very bad for our economy overall with increasing costs across the board. That suggests a reduction in travel due to rising prices and a slower overall economy. So how does that help Southwest Airlines?

I love Altria, too. But it’s a little expensive.

Nick’s Reply: Thanks, John. We agree that a trade war would be bad for the overall economy in the long run. But if protectionist measures are passed, it’ll provide a boon for the U.S. economy as we build more factories and infrastructure—at least in the short term…

If we do get into trade wars, we expect it will be harder for Americans to travel abroad. If that happens, Americans will take more vacations within U.S. borders. Southwest stands to profit in the short term.

From Dave S.: I’m curious about your selection of L Brands for the America First Portfolio. While the majority of its revenue comes from selling products in the United States, many of the products it sells (like Victoria’s Secret bras, for example) are made in China, Sri Lanka, and Thailand. Will a border tax put its profitability at risk?

Nick’s Reply: Your thesis applies to some companies, but not all. Low-margin apparel makers will have problems if a tax on imports is passed. But high-margin companies like L Brands will be all right. Here’s why…

The proposed border adjustment tax would be based off how much a product is worth when it’s imported. Let’s say Victoria’s Secret pays $3 for every bra it imports. A border tax would likely be about 20%. That means Victoria’s Secret would pay 60 cents in taxes per bra.

But Victoria’s Secret is a high-margin apparel retailer. It can turn around and sell those bras for $60 apiece. So whether it costs them $3 or $3.60 to import a bra, it’s not going to do much to L Brands’ bottom line.

On December 18, 2015, Congress passed a bill that gives 119 million eligible Americans the chance to collect “consumer rebate checks” that could go anywhere from $1,230 to $12,900 for some people.

There are no income requirements to collect. Our colleagues over at The Oxford Club have the details here… 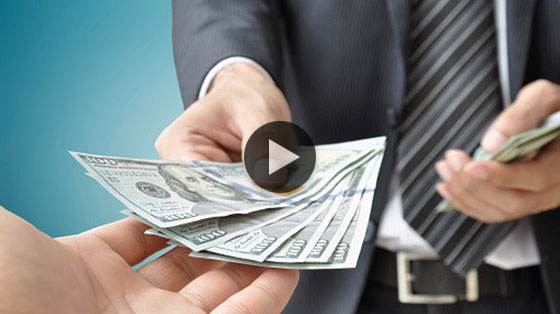