That’s the take from Joel Litman.

Last month, I attended the exclusive Stansberry Conference in Las Vegas. The conference attracts some of the greatest minds in the business.

I was excited to see presentations from True Wealth editor Dr. Steve Sjuggerud, Shark Tank’s Kevin O’Leary, and our very own Teeka Tiwari.

But perhaps the biggest surprise was Joel’s presentation.

To be honest, I had never heard of Joel Litman or his Valens Research firm. And that’s rare. I know a lot of people in the industry…

But as soon as he came on the stage, I was hooked. He told the audience that Facebook was one of his biggest and longest holdings. 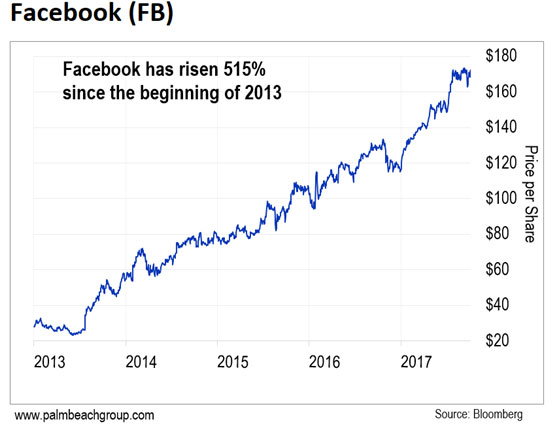 You may think it’s too late to get into Facebook. But Joel doesn’t think the run is over yet.

If you’re looking for a great buying opportunity today, here’s why Facebook should be on your radar…

Sorting Out the Numbers

The firm uses adjusted accounting methods to review financial statements. He says these methods are better than those used by Wall Street.

Valens reviews more than 5,000 company statements every quarter. They check every single line… making sure each is reliable.

Often, they find that companies overestimate their earnings.

But in some instances, companies unintentionally underestimate their profitability.

One of the accounting metrics Joel looks at is return on assets (ROA). That’s profits divided by assets.

I won’t get into all the accounting details. Just know this…

Based on traditional accounting methods, Facebook’s ROA is 14%. That’s better than the average S&P 500 company, but it’s not great.

Facebook looks marginally profitable if you go by Wall Street’s numbers. But that couldn’t be further from the truth.

You see, Facebook holds a lot of cash. But it doesn’t need all of it. And Joel says that distorts its ROA.

Now, Valens recognizes a company needs some cash to operate. But his firm determined Facebook carries $25 billion in additional cash.

If you take out that $25 billion (along with a few other adjustments), Facebook’s ROA climbs to 54%.

That’s a huge increase… especially when you consider the average company Valens follows has an ROA of just 6%.

Here’s why that’s so important… The market still hasn’t caught on to Facebook.

On Pace to Double Its Price

Usually, a company this profitable trades at ridiculously high valuations. But Facebook doesn’t.

Even after its meteoric rise over the past five years, Facebook is still priced fairly cheaply.

The forward price-to-earnings (P/E) ratio measures how much you’re paying for each dollar of next year’s earnings. After Valens’ adjustments, Facebook’s forward P/E is 26.

But remember, Facebook is nine times more profitable than the average company. So, it deserves a higher P/E.

You see, Facebook is making a 50% ROA. That implies profits are growing at a similar pace.

If that’s the case, Facebook will have considerably more profits in a couple of years… It may even double.

That’s why Joel believes Facebook is still a great opportunity at these levels. He’s been spot-on with his Facebook call so far.

I trust his numbers.

Fear Has Left the Market 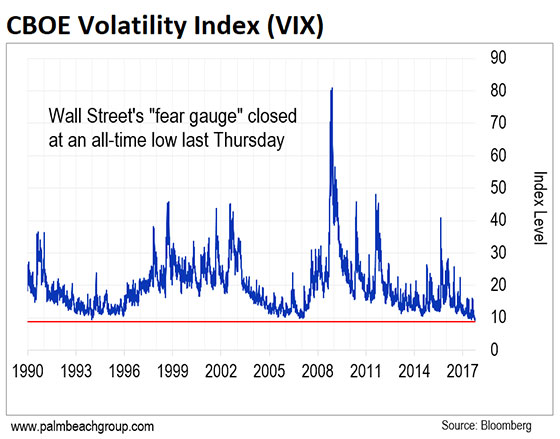 Complacency can be a good thing…