Take a look at your portfolio right now. You may be holding a hidden value trap.

We’ve gone over value traps the past two days because falling into one can be the fastest way to destroy your portfolio.

If you follow our five warning signs, you should be able to avoid them. And if you unfortunately fall into one, we’ve given you a three-step escape plan to get out with minimal losses.

Today, we’ll tell you about a blue-chip company that’s flashing warning signs. On the surface, it looks cheap. But we’ll show you why it should be avoided at all costs…

Beware of This Struggling Retailer

Staples was founded in 1986. In just 10 years, it generated over $3 billion in sales. That was good enough to land the company in the Fortune 500.

Times were so good, Staples even put its name on the home arena of the Los Angeles Lakers and Los Angeles Clippers.

But things have changed… drastically.

In the past two years, share prices have declined more than 50%—from about $18.50 to $9 (see chart below). That may seem like a bargain now, but there’s a reason share prices are dropping like stones.

Staples also looks cheap based on its normalized P/E ratio. (This ratio shows earnings without one-time charges and the true earnings from a company’s normal operations.)

As we’ll show you, Staples is flashing multiple warning signs.

On Monday, we told you a value trap is a company that appears cheap because of a large price drop in its shares. Yet there are signs indicating it’s in serious trouble.

Five of the most common signals are:

Four of them are flashing for Staples. Let’s go over them…

Warning Sign No. 1: Staples’ industry is in long-term decline.

Amazon is eating brick-and-mortar retailers’ lunches. And Staples isn’t the only one struggling.

Mega-retailer Target announced last week that November and December store sales slumped 3% from the prior year.

Traditional mall stalwarts Macy’s, Nordstrom, and Kohl’s are all down because of online competition. Even Walmart is feeling the pinch.

People realize they can save time and money by shopping online. So they’re shopping less at traditional retailers.

Although half of Staples’ sales are online, its online sales declined last year. All signs indicate that the traditional retail industry is in a long-term decline.

Warning Sign No. 2: Staples has lost its position as an industry leader.

But Staples’ class is small. The only other company in its class is Office Depot… which is facing the same problems as Staples.

Here’s what JPMorgan failed to see: Amazon makes it ridiculously easy to buy everything, including office supplies… And when people need office supplies, they’re going to Amazon.

Gross profits are sales minus the cost of the goods sold.

This metric tells us two things: the markup on a company’s products and how much sales can go toward paying other expenses.

In 2011, Staples’ gross profit margin was 27.1%. Last year, it was 25.9%. This means Staples has had to provide bigger discounts on products to make sales.

Although Staples’ accounting appears to be good, four warning signs are enough for us to stay away.

If you own Staples, you may want to consider removing all or part of the position from your portfolio. If you’re tempted to buy because it appears cheap, don’t. Staples has value trap written all over it.

Before you consider buying any company that looks cheap, you should first use our checklist to see if it passes that value trap test.

You should also do a periodic review of your portfolio to make sure no hidden traps are in it.

As we said above, Amazon is crushing traditional retailers…

The chart below tracks the performance of Amazon against the SPDR S&P Retail ETF (XRT).

XRT holds some of the biggest retailers in the country (Amazon only makes up 1.3% of the index). As you can see, Amazon is vastly outperforming the competition. 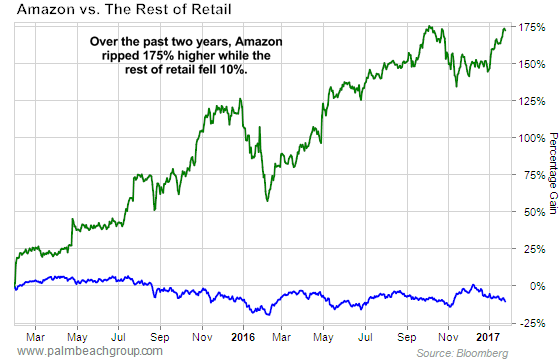 As long as Amazon keeps dominating retail, you should stay away from the brick-and-mortar stocks.

Digital Cash or Credit?: You may be asked this question at a restaurant in the near future… According to this report, the volume of electronic payments last year surpassed cash transactions for the first time in history. Electronic payments settled with credit and debit cards reached nearly $25 trillion in 2016. But now, credit card payments are in danger of being supplanted by digital currencies.

War on Cash Battle Plan: For more than a year, we’ve been warning Daily readers about the global push by lawmakers to eliminate physical cash. If you want to see the clearest picture yet of the combatants, battle lines, and weapons used in this war, check out this impressive infographic. After you do your reconnaissance, learn how you can join the rebellion against the War on Cash right here.

Fear and Loathing in the Markets: The market’s “fear index” surged as much as 22% on Monday. And stocks dropped after President Trump’s executive order restricting travelers from seven Muslim-majority countries. The CBOE Volatility Index (VIX)—which uses S&P 500 options prices to track the market’s expected moves over 30 days—experienced its biggest rise since early September. Our friends over at Casey Research say rising volatility could send stocks on a wild ride. So buckle your seatbelt.

Twila W.: I like the new Daily “Week in Review” format on Saturdays. I don’t always get to read the issues every day, so this way I’m able to easily catch up over the weekend.

Editor’s Reply: We’re glad you like the Week in Review. If you have any suggestions to improve it, let us know right here.

Richard D.: A warning about bitcoin. I don’t think it’s a secret that governments are trying to direct the economy to a cashless mode. They have been working for years on this and the trend continues. When success draws near, do you honestly think they will allow bitcoin to interfere?

The thing about bitcoin is that it would not take years to devalue it. Overnight, laws could be passed that would make all transactions in bitcoin illegal. Bitcoin could, and in my opinion will, lose 100% of its value in a heartbeat. No government backs bitcoin and any government can smash it. Buyers would be wise to be vigilant.

Editor’s Reply: Hi, Richard. We’ve addressed this issue before. In short, any country could ban bitcoin (or any other currency or medium of exchange, for that matter). However, like alcohol prohibition before it, how enforceable would a digital currency ban be?

Furthermore, bitcoin is an international digital currency. It’s primarily used outside the United States. So even if the U.S. government wanted to ban it, bitcoin would still be legal elsewhere. And a coordinated global ban would be even more difficult to enact than a national ban.

Finally, because bitcoin and other cryptocurrencies are decentralized, you can store them virtually anonymously. What is unique about bitcoin is that if you hold it in an offline wallet, it’s completely secure and undetectable. That makes enforcing a ban very difficult.

Brandon and Jo Ann W.: We are writing as a follow-up to our Wealth Builder’s commitment that we both submitted to you a year ago. We did in fact promise to let you know of our progress…