“The financial world is either risk-on or risk-off… It’s a world that is either expanding with win-win deals or contracting… civilizing… or decivilizing.

“It is either making progress… or it has gotten too far ahead of itself and is backtracking,” says Bonner & Partners chairman Bill Bonner.

And as Bill has been showing, the most important trend in finance is, of course, the decline in the Dow-to-Gold ratio.

Let’s call this the “primary trend.” But it got waylaid en route, and it’s spent the last eight years backtracking.

Bill has been waiting eight years for this trend to change. Eight long years… of fake money and rising stocks.

And now, finally, this most important trend in finance is “back on.”

To my mind—and for my money—it’s presenting the biggest opportunity to profit since, well… I found bitcoin in 2013.

This chart shows it all. The towering peak in 1999. The countertrend rally from 2011 to 2018. And if you look very carefully, a recent reversal. 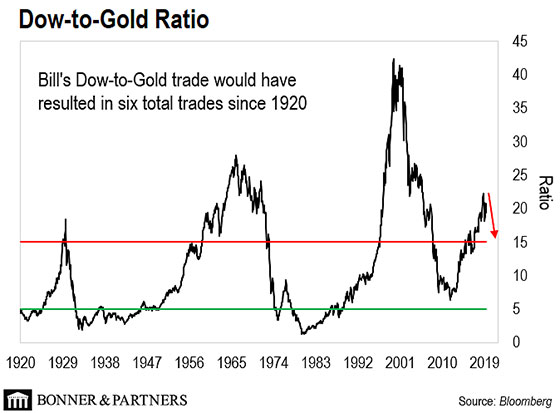 I interpret this recent reversal as the Dow-to-Gold primary trend reasserting itself, getting back on track, and once again marching back down towards single digits. 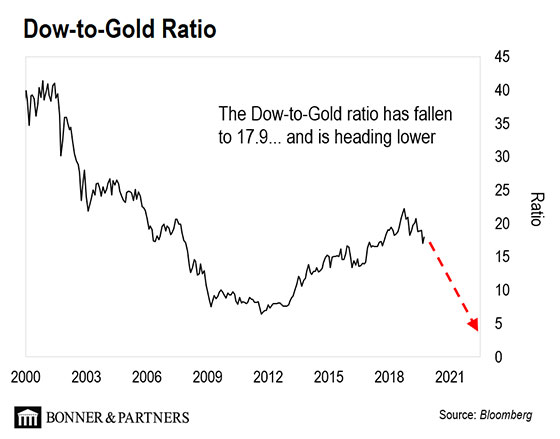 I’m expressing this trade by buying a basket of various gold investments and selling stocks short in an equal amount.

Of course, if I’m wrong and the Dow-to-Gold ratio isn’t ready to resume its primary trend lower, the market will let us know—by making a new high and rising above 22.36.

But I’m willing to bet that’s not going to happen.

The Dow-to-Gold ratio likes to move in big, clear trends. And once it’s in motion, it tends to stay in motion.

This is a perfect speculation. And I’ve put some of my own money behind this…

If we’re wrong, we stand to lose a little with our clearly defined stop loss. If we’re right, we make a killing.

It all started a few years ago. I was in Rwanda when I received a buyout from my previous employer.

First, I put 90% of my buyout fee into gold coins. I got a fantastic deal from leading coin merchant Van Simmons on beautiful, rare, pre-1933 coins trading for bullion prices. Cheaper-than-bullion prices, in fact. And I “buried” them…

And they will remain “buried” until the Dow-to-Gold ratio breaches 5—which I expect to happen sometime in the next decade.

I took the remaining 10% of my buyout fee and bet it on the Dow-to-Gold ratio falling. Here’s how this works:

But if it falls, I win as follows:

But as Bill’s coauthor on The Bonner-Denning Letter, Dan Denning, said to me recently, “This baby’s goin’ down!”

I have total conviction in this idea. It’s almost entirely inspired by Bill’s work. But it is a trade that will play out over several years.

So what am I doing in the meantime?

“Daddy, we don’t want to go to India,” said the kids at breakfast recently.

My family and I had a tough time in India last time. First, my daughter fell off a bunk bed in Udaipur and smashed her head so hard, she got a serious concussion. (We had our first experience of an Indian hospital.)

Then, the kids got ill and lost a terrifying amount of weight. And in the middle of all the diarrhea, vomiting, and fevers, we got the call that my mother was dying, and we had to urgently make a long journey to London.

The final straw was on our last night in India. We got eaten alive by bed bugs. And they infested our luggage—we had to throw it all away.

Very stressful times. But we overcame them. And we went back for more!

For the past few months, we’ve been traveling around the world. We’ve been to India… Southeast Asia… and now China. Next, we’ll be going to Japan… Canada… and back to London.

In the meantime, I’ll be keeping a close eye on the Dow-to-Gold ratio, waiting for the primary trend to play out.

That’s right. Our strategy is simple. We sold all our stuff (except my golf clubs; they’re in a small storage locker in South Florida), converted our assets to gold, “buried” it in various spots around America, warned our friends and family about the danger, and got out of Dodge with our three kids and one suitcase in tow.

We travel very light. This is all the stuff I packed for our seven-month-long trip around the world. 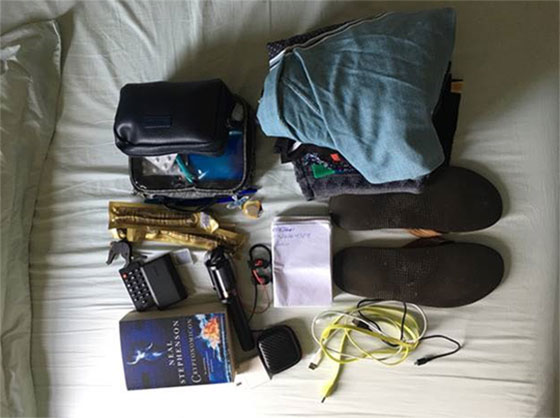 I packed light for this trip

The two most common questions people ask us about our trip are: “How are you financing it?” and “What do you do about school?”

We’re financing the trip with money we’ve saved, stretching our money by going to cheap countries. We only spend a few hundred bucks a week.

And we do school with the kids six days a week from 8 a.m. to midday. No exceptions. Even when we’re travelling. With all the chaos around us, this daily routine keeps everyone sane.

Being able to whisk my family away on this trip of a lifetime is such a gift and I want to cherish every moment.

And so, I’ve switched my phone off—that tyrant that sucks so much of my attention. And when I write, I write by hand.

Speaking of writing, starting tomorrow, I’ll be writing you more. So look out for my “postcards from the fringe.”

There, I’ll give you updates on my travels, on the Dow-to-Gold ratio, and on the progress of our trade of a lifetime.

Are we crazy? We’ll see… 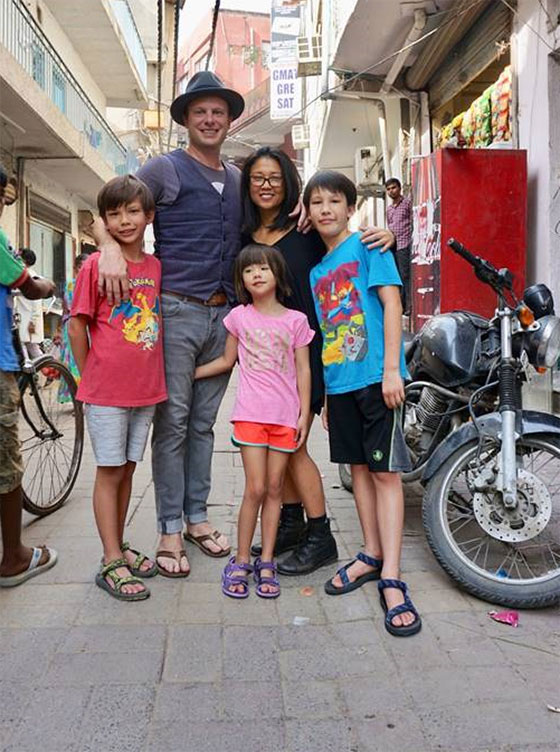 Me and my family on one of our latest adventures

Chaka’s Note: As Tom put it, he’s “all in” on Bill’s Dow-to-Gold trade. And now, you can keep up to date on the progress of the trade and Tom’s insights as he travels the globe, family in tow. All you have to do is subscribe to his e-letter for free right here, and you’ll receive your first postcard straight to your inbox tomorrow at 7 p.m. ET.