Today, central bankers are raising rates again. And it’s a warning sign that the bull market might be nearing its end.

But let’s be serious… Eventually, it’s going to end. All bull markets do.

Since this bull market is the second longest in history, I’m looking for signs of a top.

I don’t see many yet… But if history is any indicator, the bond market should be the first place to look.

Bond prices are generally stable… and the bond market doesn’t fluctuate much. But when it does… watch out.

The charts below show the past 20 years of the Dow Jones Equal Weight U.S. Issued Corporate Bond Index and the Dow Jones Stock Index. 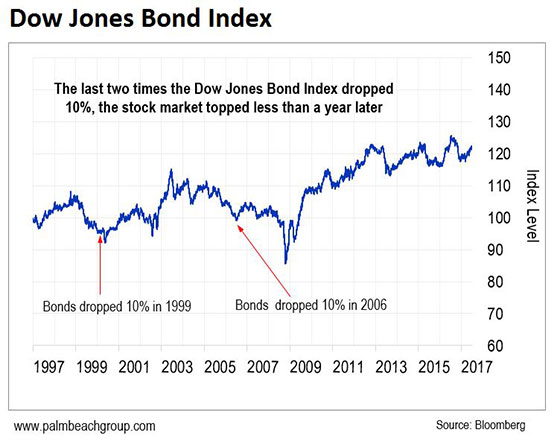 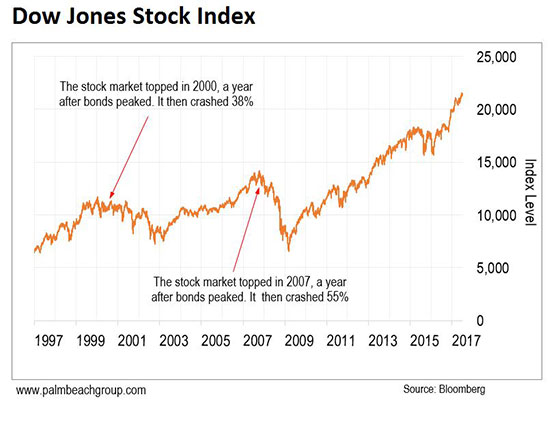 As you can see, the bond index fell more than 10% only twice in that span: in June 1999 and in September 2006. Both times, the stock market topped within the next year.

Today, the bond index is down only 3% from its peak in 2016. But it might be headed for an even bigger drop…

Bonds are starting to fall because interest rates are back on the rise.

After years of historically low and negative interest rates, central bankers around the world are now reversing course.

The Fed also wants to sell some of the bonds it owns. That’ll put more supply into the market and push interest rates even higher.

But the Fed isn’t the only central bank raising rates…

These moves have caused interest rates to rise across the globe. And that spells bad news for the bond market.

The Canary in the Coal Mine

Rising interest rates will hurt all bond prices. But the market I’m watching closely is the corporate bond market (see the Dow Jones Bond Index above).

You see, investors consider government bonds to be risk-free. That’s because the U.S. government will never default. It can always print its way out of debt.

But since corporations can default on their bonds, traders demand higher yields. This rate is called the “default risk premium.”

As the risk-free rate rises, so does the default risk premium.

And it won’t take much for interest rates to rise enough to drive corporate bond prices down by 10%.

That’s what I’m looking for…

If a rate rise drops bond prices by 10%, we’ll get serious about preparing for a bear market.

I’ll keep you updated when bond prices fall and help get you ready for a bear market.

Nick’s Note: There’s some big news happening in the cryptocurrency space that you won’t find in the mainstream media…

The Commodity Futures Trading Commission (CFTC) has formally registered a company as a cryptocurrency swap execution facility (SEF). That means the company can trade cryptocurrency derivatives.

Big institutions have stayed out of the cryptocurrency market because they had no way to hedge their risk. But Teeka says the CFTC decision will open the floodgates to a wave of institutional money.

Click here or the image below to watch today’s video…


P.S. If you have any questions or stories you’d like Teeka to share in his next 3-Minute Market Minder, send them right here. 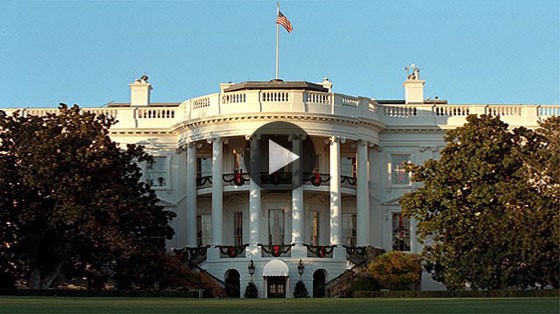