Nick’s Note: Cryptocurrencies are becoming increasingly popular as an asset class. And as with any growing market, they’ve attracted some bad actors. Below, my colleague Greg Wilson shares some simple tips to avoid scams…

On December 26, 2017, in Nanjing, the capital of China’s Jiangsu province, Zhang Xiaolei surrendered to the police.

He’s the founder of Qbao.com, an online platform also known as Qianbao.

Qianbao, by the way, translates to “money treasure.” And that’s exactly what Mr. Xiaolei promised.

Qbao is a private bank in China. Its focus was online wealth management. And it offered juicy returns.

The model was quite simple.

Investors would make a deposit with Qbao. Then, to get paid, they would take part in promotional activities. Watching advertisements was one such task. Another involved sharing information about products on social media.

The more investors deposited, the bigger the return they could make.

And Qbao was offering returns of up to 80% annually.

But it was a trap.

You see, Qbao was a classic Ponzi scheme. Investors were offered alluring returns. But new investments were used to pay off the old ones. And there were never any profits.

Today, I’ll tell you about a similar scheme that similarly caught crypto investors off guard. Then, I’ll tell you how to identify these schemes so you don’t fall prey to them.

But first, let me show you what happened to Qbao’s investors. It’s an important lesson you need to learn.

The Hook Is Set

Qbao’s returns were too much for the public to resist. By late 2017, the website was signing up 2 million investors per day. And it claimed to have over 200 million registered users.

Even worse, many investors borrowed heavily to participate… hoping the returns would cover the interest payments.

One 26-year-old investor applied for seven credit cards and used the funds to make investments in Qbao.

After Xiaolei’s arrest, the investor said, “I don’t know what I should do.”

Many others are in the same position.

In total, Qbao illegally raised 70 billion yuan ($11 billion). And its unlikely investors will ever get a penny back.

Ponzi schemes have been around as long as money itself. And now, we’re seeing them pop up in the cryptocurrency space. But despite the numerous cases over the years, investors continue to fall into the trap.

Every Ponzi is built on a big promise of riches. It’s this promise that gets you to let your guard down and invest.

The one I want to tell you about today involves a crypto venture called BitConnect. Perhaps you’ve heard of it. Hopefully you didn’t invest in it.

BitConnect’s big promise was that of stable income and financial freedom. Who doesn’t want that?

The promise actually gets bigger as you dig into the details.

Here’s how it worked. You deposited your bitcoin (BTC) into BitConnect and in return, got the BitConnect token (BCC).

As a BCC holder, you were entitled to interest on the earnings of the BitConnect trading bot. (A trading bot is an automated system that performs the work for the user, such as watching prices and executing trades.)

BitConnect guaranteed monthly returns of 40%. But you could make even more.

And that’s where it gets interesting…

Of course, the more you made, the faster you got your capital back.

Everyone was happy until January 16. That’s when BitConnect was forced to shut down.

The Warning Signs Were There

One lesson you should learn from this episode is this: There are always warning signs of a Ponzi scheme… if you’re willing to look.

For example, from November to December, notable cryptocurrency experts—including Vitalik Buterin, Mike Novogratz, and Charlie Lee—all warned investors that BitConnect was a Ponzi.

Then on January 5, BitConnect received an emergency cease and desist letter from the Texas State Securities Board.

If that wasn’t enough, less than a week later, the North Carolina Securities division issued BitConnect another cease and desist letter.

Had you heeded the warnings, you could have gotten out with most of your capital.

But five days later, BitConnect announced it was shutting down. And $2.7 billion in investor funds disappeared. Check out the chart below. 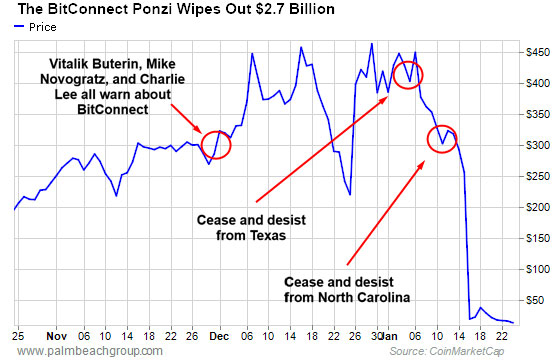 Don’t Let This Happen to You

You can avoid scam investments like BitConnect with just a little bit of due diligence.

Here are three steps you can take:

The first thing to do is be aware of whenever you get excited by a prospective investment. And then ask yourself, does it make sense?

If it sounds too good to be true, it’s a red flag.

Spend some time researching what others are saying about the investment. In the case of BitConnect, the warnings that it was a scam were plentiful.

If those you trust in the community are saying it’s a scam, that’s another red flag.

Ponzi schemes focus solely on returns. For example, you can find information about investment opportunities in the BitConnect FAQ. But there’s nothing about the risks.

If an investment doesn’t discuss the risks, that’s a third red flag.
If you don’t have time to spot all the red flags, just follow us at The Palm Beach Letter. We only talk about the best projects in the space. You can learn more here.

He’s just an ordinary guy born on a farm in Kansas. He didn’t graduate from a fancy college. He doesn’t have an MBA.

Yet he stumbled upon a "secret key" technique that allows him to make more money in 8 hours… than most people make in a month. He calls it his retirement hobby. 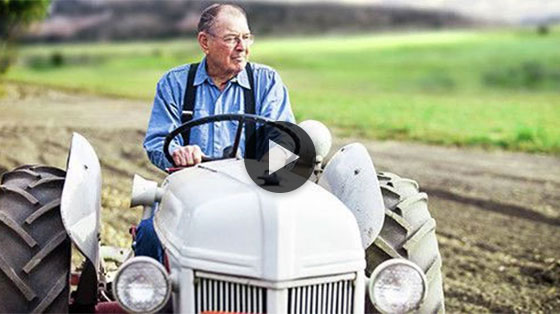