I attended the symposium in Vancouver a couple of weeks ago. It’s the world’s premier natural resource conference. There were well over 100 speakers and companies presenting, and hundreds more were in attendance.

But as I mentioned yesterday, the mood was gloomy. Most commodities topped out in 2011… They’ve been down since. 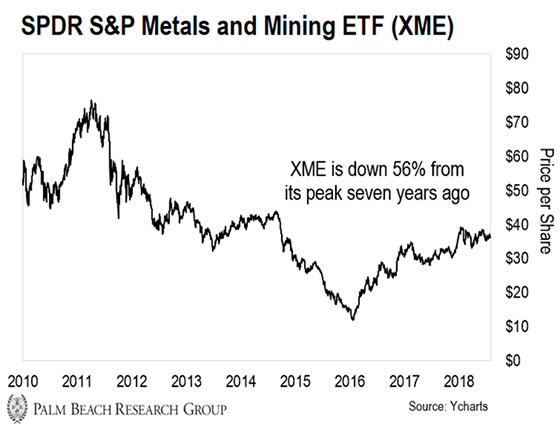 The chart above shows the SPDR S&P Metals and Mining ETF (XME), which holds a basket of mining companies.

As a whole, miners have lost 56% of their money over the last seven years. It’s no wonder these guys are feeling down in the dumps.

At the Palm Beach Research Group, we still like gold, though. It’s the original chaos hedge… and one of our favorite ways to preserve wealth.

Gold acts as a form of insurance against things that could go wrong. That’s why we recommend that you allocate a small amount of gold (about 5%) to your portfolio.

Despite the downturn in metals, I still see upside in gold. Today, I’ll tell you why… and share the three best ways to add gold exposure to your portfolio. 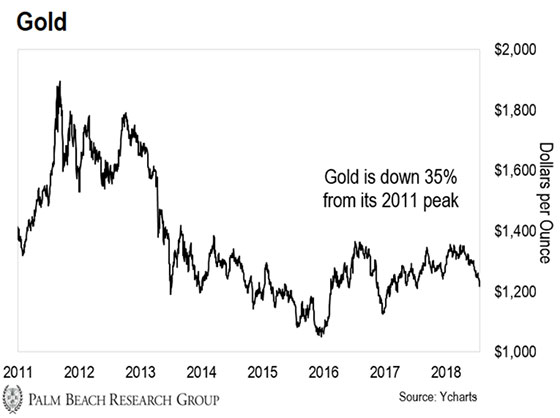 Big swings are normal in the commodities markets… So are long drawdowns like what we’re seeing now. Commodities are known for their booms and busts—and always will be.

But as the chart shows, gold appears to be carving out a bottom. This process can take years, though. That can be very frustrating for mining companies and their investors.

It takes patience to make money in these markets. But while we wait for a turnaround, there are three niches within the mining space that will benefit from the next boom—whenever it comes.

That’s why you want to be positioned early…

Three Ways to Prepare for the Next Gold Boom

These are companies that finance mining projects, and in return, receive royalties from all the gold, silver, or whatever else they produce.

Franco-Nevada is the largest royalty company in the space, and it’s weathered the bear market well. In fact, it’s up 77% since September 2011.

They don’t have to rely on finding major discoveries like mining companies do. They make money by selling the supplies necessary to hit these jackpots.

A major company in this space is Caterpillar, likely the world’s largest supplier of mining equipment. It is far from a pure play on the mining sector, though. Caterpillar also makes construction, oil drilling, and transportation equipment.

Ritchie Brothers Auctioneers is another picks-and-shovels play… The company auctions mining equipment. If this downtrend continues, more companies will need to quickly sell equipment to survive.

Look for management teams led by people who have been through a few of these boom-and-bust cycles… They know what it takes to survive the downturn.

It’s also nice to know if the people leading the company have become wealthy from the mining space.

During the “Legends of the Mining Industry” panel at the Sprott conference, mining tycoon Ross Beaty said he’s willing to put another $500 million into his companies—if needed.

Beaty should know a thing or two about mining. He’s spent almost 40 years in the industry. Since 1985, he’s founded and sold several resource companies. Today, he runs Pan American Silver and Equinox Gold.

On the same panel was Ivanhoe Mines founder Robert Friedland, who is a member of the Canadian Mining Hall of Fame.

Friedland said shares of mining companies (including his own) fall 50% or more all the time. It’s part of the business.

He’s not worried about the fall in Ivanhoe… In fact, he’s partnering up with CITIC Metal—a subsidiary of China’s largest conglomerate—to finance new projects around the world.

Beaty and Friedland are buying projects now to start mining when the tides turn. They plan on making a fortune doing this… You should ride their coattails.

Those are the three spots I’m looking to start a position in. If there’s a further pullback in gold, I’ll add a little more to my positions.

Like I said, the turnaround in commodities could happen soon… or it might not happen for a while. But I want you to be positioned for when it does… because these types of companies have the ability to multiply your money.

Now, some of these companies are small—and can be volatile. As always, do your homework and research each company. And never risk more than you can afford to lose.

P.S. We suggest every investor allocate a small portion of gold to their portfolio as a form of protection. Tell us the other ways you’re protecting your portfolio right here…

From Bob T.: The reason why younger people are gravitating to “socialism” is that they’ve seen how crony capitalism works. We have a bizarre, distorted version of capitalism that “socializes” losses and privatizes profits.

Their parents were smashed in the 2008 financial crisis, but the government gave a $700 billion bailout to bankers and shareholders. The top 1% gets richer and the media have encouraged fighting between workers who make $80,000 and those who make $30,000 per year. Sixty years ago, we had balanced budgets, and wages were much more equal. I smell an eventual revolution…

From Dan L.: Hi Teeka… I mostly agree with your analysis of Income Exodus. I’m in the mortgage business and the behavior of the 10-year Treasury bonds has considerable influence on mortgage-backed securities (which influence longer-term fixed rates). I’ve been telling my prospects that waiting to buy and/or finance will cost them money as rates will go up.

The only thing I think you may have overlooked was the fact that the 4% GDP growth we saw this quarter is skewed and not likely to be repeated.

Durable goods orders were jacked up artificially in this last reporting period due to impending tariffs and trade war fears (companies placed orders ahead of the impending tariffs). The next GDP report should drop below 3% again… But even with that, I agree—the 10-year bonds can’t stay below 3%.

And a new Palm Beach Letter subscriber shares his thoughts…

From Gary W.: I just want to say that this is the first time in my life that I’ve subscribed to such a publication. I’m retired and between my wife and myself, we have five sources of pension income. We’re also totally debt-free.

I’m not very astute at handling money… and my wife wants to build on what we have and to provide for our daughter’s future, as she has just established her own company. We don’t have a lot of money to invest, so I hope through The Palm Beach Letter we can learn to use our money judiciously!

I look forward to your help in aiding us to live a better and more fruitful life!

The president did something very unusual in January. The media didn’t understand it… even members of the Trump administration seemed perplexed.

But tech expert Jeff Brown thinks he knows why the White House took this unprecedented step. And if Jeff’s right, this could secure America’s economic dominance for decades. Full story here. 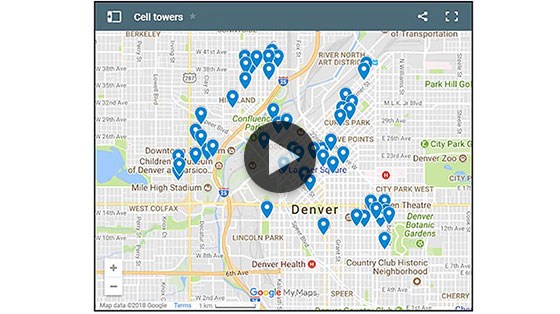