Remember the internet in the 1990s?

A lot of us got online using those AOL CDs we received in the mail.

But when you did get online, there were only a couple million websites (compared to over 1.7 billion today).

Your computer would take about 30 seconds to load each page. Meanwhile, you’re paying for the internet by the hour. And to top it off, you’re tying up the phone line.

When you finally arrived, you landed here: 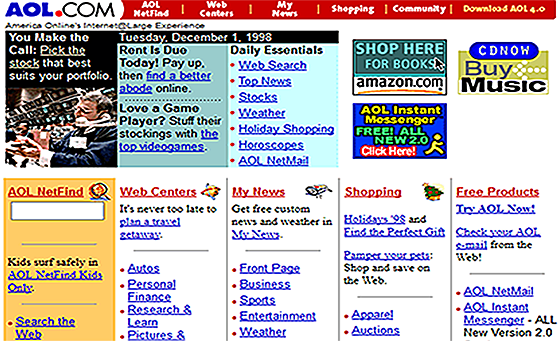 That’s the AOL homepage back in 1998. And if you wanted to find something online, it wasn’t as easy as it is today.

You see, at the time, the internet search was still prehistoric. It was part of what we now call Web 1.0.

Put another way, whoever paid them the most got the best page ranks.

But that all changed thanks to a single investment from a man who went on to become one of the wealthiest people in the world.

And he found this idea by using a simple strategy we follow at PBRG: Be early. And be right.

If you want to make life-changing gains in the market, Daily editor Teeka Tiwari says you need to do two things:

That’s precisely the game plan Jeff Bezos used to make a fortune from a single investment.

In 1998, Bezos was busy building Amazon.com when another company caught his eye.

This small company intrigued Bezos so much he invested $250,000 into it. At the time, this was a significant sum of money for him.

Amazon was just getting started, and it would be over 20 years before Bezos would emerge as the world’s richest man.

When Bezos first introduced the idea, he remarked, “There was no business plan… but they had a vision. It was a customer-focused point of view.”

It was an uncomfortable idea. But Bezos had the foresight to follow the research. And it said this company was at the forefront of a massive trend.

That little company he invested in back in 1998: Google.

You probably use Google every day to search the internet. That’s because it developed a revolutionary search engine.

Instead of relying on one metric, Google’s algorithm accounts for multiple factors… including page quality… the number of links… and relevance to a user’s search, in addition to how much advertisers paid them.

You can see the results in Google’s market share chart below. It quickly took over the search market share. And it’s still the dominant search engine today. 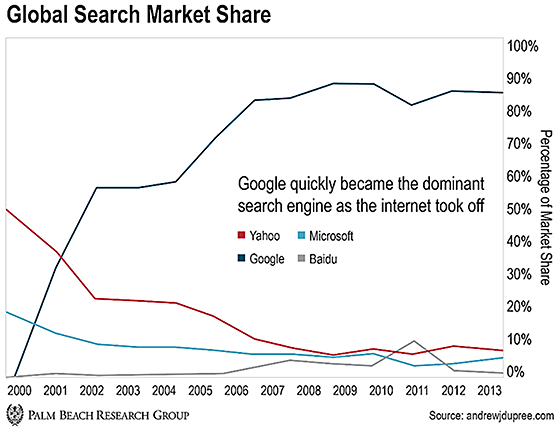 That’s the life-changing power of investing early in a massive trend… and following the experts to the right company to play it.

Be Early, Be Right

To make life-changing gains in the market, Daily editor Teeka Tiwari says you need to invest in a massive trend early… and find the right company to play the trend.

It’s the same strategy he used when picking his first two trillion-dollar trades.

His second trillion-dollar trade happened when he found cryptocurrencies in 2016 – today worth over $1 trillion. If you had listened to just one of Teeka’s crypto recommendations… you could have turned that same $1,000 into $1.5 million.

Unfortunately, you might not have heard about either one of these.

Teeka reserved his research on Apple for his Wall Street clients. And while his second trade – crypto – was available to everyone… it started all the way back in 2016.

But here’s the good news…

During this event, Teeka will reveal this $1 trillion trend… and tell you how you can access the right companies to profit from it.

This idea is so big… he’s even invited some special guests to help you understand the sheer size of the opportunity.

Teeka’s partnered with the world’s leading expert in the space to bring this idea to you. A man who athletes… movie stars… word-class doctors… and even Oprah Winfrey rely on as the most-trusted source of information in this emerging trillion-dollar trend.

Over the next 18 months, Teeka believes a handful of companies this expert has advised on could pull forward a century’s worth of stock market gains.

Now, due to the sensitive nature of this opportunity, we can’t reveal his identity until Thursday, July 8, at 8 p.m. ET. So mark down the date on your calendar.

The opportunity to be early and right on a trend – like Jeff Bezos was with Google – doesn’t come often. It may happen only once per decade.

So don’t miss this opportunity. Click here to reserve your seat.

P.S. As a bonus for attending, Teeka will give away a never-before-released pick with the potential to 10x your money from this $1 trillion trend. You’ll get the name and ticker symbol during the event, no strings attached.

To date, Teeka’s past free picks have an incredible average peak gain of 1,691%. So you’ll want to come just for that.

Plus, event VIPs get Teeka’s special bonus report. Click here to learn how to become a VIP for free.