Today’s Daily is for the traders.

As I’ll show you in a moment, I see a short-term setup that signals an impending 12% drop in the market.

We’re going to get a little more technical than normal. If you’re a trader—or interested in learning more about trading—understanding this setup will help you become more profitable.

The bearish signals I’m referring to happened on Tuesday. And it was confirmed the following day.

It is a very reliable indicator that I’ve used before to profit on short-term trades.

Today, we’re going to look at the NASDAQ 100 Index. This index tracks 100 of the largest tech companies in the world.

These companies have been the market leaders. We’re talking about the FAANG stocks—Facebook, Amazon, Apple, Netflix, and Google.

The general market follows what these companies do.

And right now, this chart is looking very risky. We have two bearish signals that, combined, set up a very high-probability trade.

The first signal I want to show you is the double top. As you can see in the chart below, the NASDAQ 100 recently showed a double top around the 7,000 level. 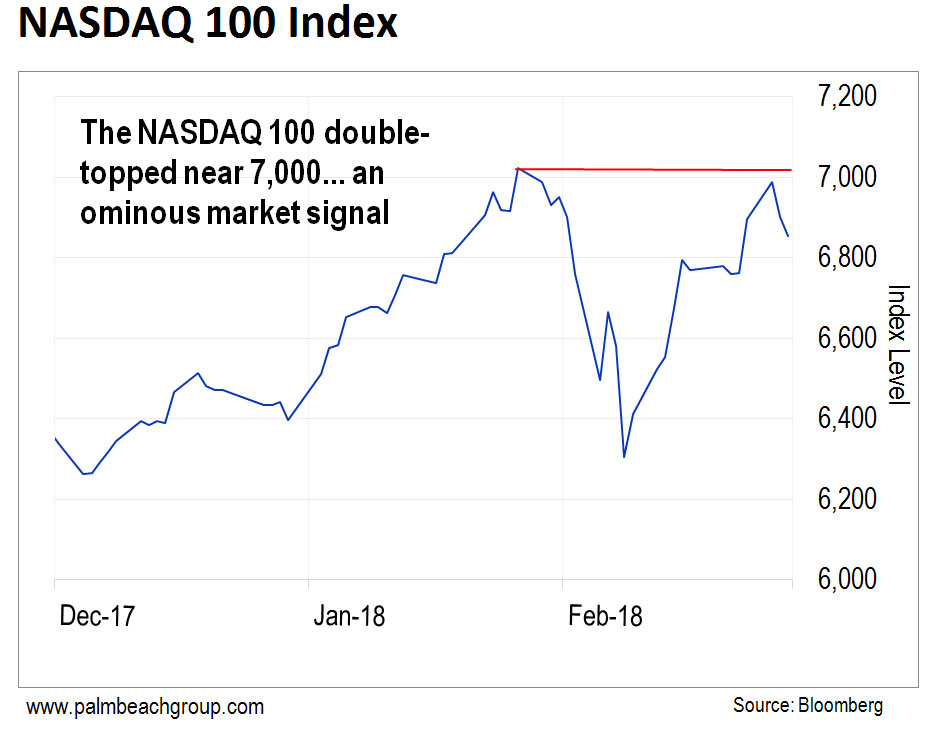 Technicians consider double tops to be a reliable reversal signal. What this means is that, on two separate occasions, the buyers tried to push the market higher… and failed.

In other words, it signals that the bears have taken control of the market.

And it’s even more ominous when this happens at a round number. Markets are often attracted to big, round numbers. It’s a psychological thing.

To see the NASDAQ 100 fail to climb over 7,000 multiple times is worrying.

And that’s not the only bearish signal…

Now we’re about to get a little more technical.

I’m going to show you a candlestick chart of the PowerShares QQQ ETF (QQQ) which tracks the NASDAQ 100 index.

Keep in mind, candlestick charts are more complicated… But many technicians use these charts because you can get a lot more information about the market, including unique signals.

Here’s the chart—I’ll explain it a little more below. 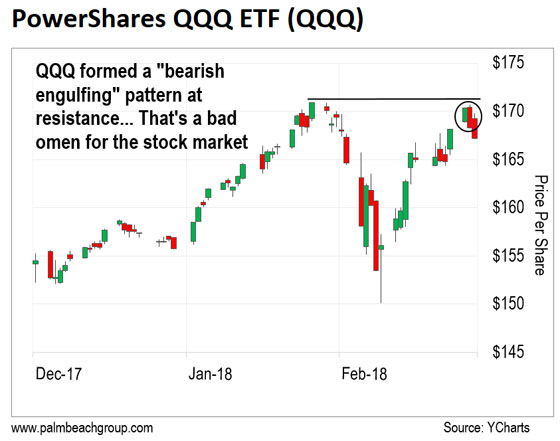 As you can see, there are a lot of bars on here that look like candlesticks. Each stick represents one day’s activity.

You can still see the double top on this chart. But what you can’t see on the line chart above is the “bearish engulfing” pattern.

A bearish engulfing pattern happens after an uptrend like the one we saw from February 9–February 26. And it shows the market reversing hard.

Look at the two bars in the circle. You’ll see a green one and a red one. The engulfing happens when the red bar is higher and lower than the green bar. It “engulfs” the green bar.

This shows the market opened higher than the previous day. But the buying power dried up and bears took control during the day. And those bears drove prices sharply lower.

And to make matters worse, the following day, the market “confirmed” the engulfing by heading even lower.

Here’s what you need to understand: As long as QQQ stays below $172, the market is in danger of falling lower.

I think we will retest the lows from early February. That’s a 12% drop.

So if you’re a trader, you might want to consider adding some short exposure. Or taking profits on your longs right now.

And if you’re an investor, review your investing plan. But remember, this is a short-term play. There’s no need to panic. I’m still bullish on the market. And I believe it will finish this year much higher.

P.S. If you’re a day trader—or just found today’s essay interesting—I have the perfect newsletter for you…

Nobody knows more about technical analysis and day trading than my colleague Jeff Clark. He’s been trading since he was 18 years old, and was so good at it, he managed to retire at 42.

Now he spends his days writing about the markets to a small group of dedicated readers in the Market Minute. You can join them here, and expect to hear from Jeff at 7:30 a.m. ET every trading day.

From Gerald K.: Big T, thank you for being the only subscription service that takes the time to do videos. I really appreciate that extra service you do. Also, I know that all who hold on will do very well with the crypto investments you recommend.

Thank you to you and your staff for caring and for all the work you guys/gals do. You folks are the best. Again, thank you very much.

Just a quick note to extend my gratitude for your hard work and dedication in helping so many toward a path of financial success. I’ve been a loyal member of the PBRG since inception and have experienced tremendous growth in my net worth year-over-year, with the cryptocurrency space being especially exciting! Hats off to a sophisticated financial team that is absolutely second to none!

Bitcoin is on the rebound…

But while crypto traders are fixated on the cryptocurrency, some of the world’s largest technology insiders couldn’t care less. That’s because they know something the rest of the world doesn’t.

It’s the technology behind bitcoin, not the coin itself, that will change the world. Details here. 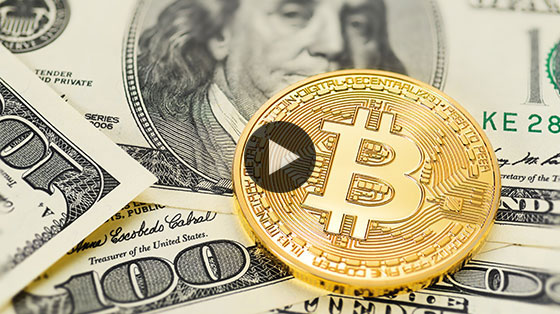