“Are you cheating on me?”

I just got off the plane from Berlin this afternoon. And I’ve been on nonstop Skype calls since coming home.

I had just wrapped up a video call with one of my Chinese crypto contacts when my wife confronted me with her suspicions.

I can’t blame her for being anxious. She’s barely seen me since early June.

“Honey, I don’t have the energy for another woman,” I joked.

She’s not amused. And she’s not the only one…

In all my years on Wall Street, I never missed my children’s birthdays. This year, I missed two of them.

Long story short, I am not a popular guy in the Tiwari household.

Why would I be willing to risk the ire of not one but three women? (Two of my daughters still live at home.)

That’s because it’s been 22 years since I’ve seen a bull market like the one we’re in now with cryptocurrencies.

I have to go all the way back to 1995 to find a market where it was so easy to make money.

One thing I’ve learned over the years is that markets like this don’t come around often. You have to make hay while the sun shines. And right now, the sun is blistering.

That’s why I’m totally focused on finding ways to double, triple, and quadruple your money.

To do that, I’ve traveled far and wide to find the biggest trends in the cryptocurrency space. Today, I want to share three of the most important ones I learned from my recent travels.

Over the past month, I’ve been to conferences in Silicon Valley, Copenhagen, New York City, Berlin, and London.

These are the three primary themes that are driving their research, development, and investment decisions:

I stumbled upon this theme at the Consensus 2017 event in New York City in late May. And I heard about fat protocols in more detail in Berlin.

In the technology world, a protocol is a set of rules. For instance, the internet is governed by two protocols: TCP and IP.

Nobody owns these two protocols. But imagine if someone did. How valuable would the protocols be?

According to a Harvard Business Review article, more than half the world’s most valuable public companies have built business models on TCP/IP.

That’s $5.4 trillion in value traced right back to TCP/IP.

The difference between the crypto bull market and the dot-com bull market is that for the first time, you and I can own a piece of a protocol.

That’s never happened before. The big money going forward is in owning the protocol, not the app.

These established payment channels are used by banks and payment providers. We’re talking about giants like JPMorgan, PayPal, Visa, and Mastercard.

As the world migrates from centralized to decentralized ledgers, how do you get these different networks to communicate with one another?

This is a huge problem. That’s why we think the next boom will be in companies that allow different ledgers to “talk” to each other.

Imagine there’s an English speaker, German speaker, and French speaker in the same room. Neither can understand the other. This is the problem right now with payment networks.

They all “speak” different languages.

But what if somebody could create a technology that would allow these different languages to understand one another?

In the tech world, this is called “interoperability.”

The projects that are building easy-to-use interoperability will be the ones that become highly valuable.

While in Berlin, I met a group of executives from drug giant Merck.

These folks are in charge of Merck’s European innovation group. They’re tasked with identifying innovative technology.

One problem these execs have with current blockchain technology is it can’t easily scale. In other words, they just can’t operate at the speed Merck requires.

This is a common complaint. I’ve heard it from executives in London, Boston, Silicon Valley, New York City, and now Berlin.

The most popular blockchain, Bitcoin, can only handle seven transactions per second. Like the old 56K telephone modems of the 1990s, that’s awful. But it would be a mistake to think that it will stay that way forever.

Just as those modems eventually transformed into the high-speed internet we enjoy today, it’s only a matter of time before bitcoin cracks the scaling problem.

Solving scaling will be the one event that will transform cryptocurrencies from a relative small-scale market to a global multitrillion-dollar market.

Many traditional investors will lose their shirts in cryptos because they are looking for the next “killer app.”

As I’ve shown you, the money isn’t in owning the applications… but owning protocols with interoperability and the ability to scale.

What I’ve shared with you today is how crypto insiders are selecting their ideas. These are the guys who are turning thousands into millions.

And by following their game plan, we could join their ranks.

P.S. Next week, I’m rereleasing my exclusive training series with legendary speculator Doug Casey called “Why Cryptocurrencies Are the Smartest Speculations You Can Make Today.”

During the webinar, I’ll show you how we find some of the world’s most explosive cryptocurrencies. And as a special bonus, you’ll have the chance to claim a portion of $250,000 in bitcoin that we’re giving away. But you must attend the webinar to get the details. Register for free right here.

Nick’s Note: Today, we have a special Chart Watch from my colleague Jeff Clark.

It’s been almost one month since I took a look at the high-yield bond market. Back then, the iShares iBoxx $ High Yield Corporate Bond Fund (HYG) was on the verge of breaking down from a bearish rising wedge pattern.

And since HYG typically leads the broad stock market, I argued that if HYG started to sell off, then the stock market wouldn’t be far behind.

Since then, HYG has stubbornly refused to break down. But the chart still looks ominous. And we could see a sell-off any day now.

Take a look at this chart… 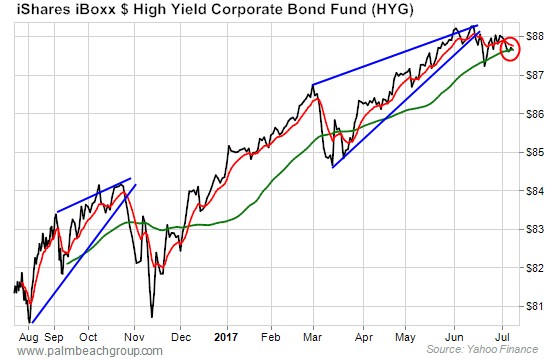 HYG broke down from its rising wedge pattern shortly after I wrote about it last month. The stock then found support at its 50-day moving average (MA)—the green line—which is a logical spot at which to expect a bounce.

Since then, though, HYG has just been chopping back and forth. It’s just like the recent action in the stock market—all it’s doing is frustrating bulls and bears alike.

But it now looks like HYG is about to make a large move lower.

Look at the red circle on the chart. Notice how the 9-day exponential moving average (EMA)—the red line—is declining and on the verge of crossing below the 50-day MA.

This “bearish crossover”—if it happens—should kick off an intermediate-term decline phase for HYG. I expect that decline will be similar to the action in HYG last November.

That would likely create some selling pressure for the broad stock market.

Of course… there has to be some sort of a catalyst for that sort of move. Perhaps that catalyst will come from Fed Chair Yellen’s congressional testimony, which concludes today.

Our colleagues over at Agora Financial have just released a BRAND-NEW investment strategy designed to make you more than 10x your money… with regular stocks… in UNDER 24 hours.

Click here or the image below to see their free presentation. 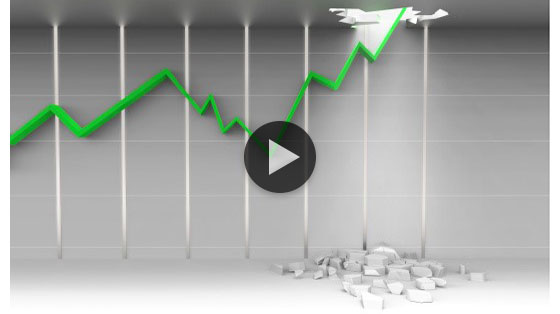