Last month, President Trump ordered U.S. B-1B bombers from Guam to fly over international airspace to the east of the Korean peninsula.

U.S. military officials said it was the furthest north of the Demilitarized Zone (DMZ) U.S. bombers had flown in the 21st century.

Trump also will deploy the USS Ronald Reagan aircraft carrier to conduct naval exercises off the Korean peninsula at the end of October.

The president’s moves are in response to North Korea’s recent nuclear missile tests.

But Kim isn’t backing down. The “Rocket Man” has more missile tests on the horizon. It looks like the U.S. may need a military “solution.”

Here at the Daily, we look for some of the safest ways to make money… And right now, we’ve found a sector that has guaranteed money coming its way.

The U.S. standoff with North Korea means increased military spending. And that will be good for defense contractors.

Military Spending Is Only Going Up

In response to North Korea’s nuclear buildup, President Trump has pledged to increase defense spending by “billions of dollars.”

Here’s what the president told reporters back in August:

We are going to be increasing our budget by many billions of dollars because of North Korea and other reasons having to do with the anti-missile.

Trump is keeping to his pledge.

And it included $70 billion more than what the president asked for. The New York Times described the bill as a “muscular vision of America as a global power.”

The bill’s passage was a rare feat of bipartisan cooperation. The Senate approved it by a vote of 89-9. The U.S. House already adopted a similar version.

Before the president can sign the bill, the Senate and House must reconcile their versions. We expect that to happen soon.

The only thing Democrats and Republicans can agree on is more spending on the military.

That means there will be a steady stream of revenue coming into defense companies.

You’re probably familiar with some of the names: Boeing, Northrop Grumman, and Huntington Ingalls.

With all the conflicts going on around the world, these companies can’t make weapons fast enough to meet military demand. Most of them face huge backlogs.

Boeing has orders out through 2027… That includes a five-year, $3.4 billion contract with the Army for 268 Apache attack helicopters.

Northrop Grumman has multiple long-term contracts. One of the most notable is the $60 billion contract to build 100 long-range nuclear bombers through 2025.

Huntington Ingalls’ backlog is equal to three years of sales. And it has contracts going out much further.

The price-to-earnings (P/E) ratio of the Dow Jones Aerospace and Defense Index is 19. That’s compared to 21 for the S&P 500.

And these companies should grow faster than the overall market. Analysts expect profits to grow 12% per year. That’s compared to 8% for the S&P 500.

The one-click way to play this is with the iShares U.S. Aerospace and Defense ETF (ITA).

This fund holds many companies that have government contracts. They will rise with military spending.

Think of it as a way to regain some of your tax dollars spent on the military.

The Service Sector Is Growing

The Institute for Supply Management’s Non-Manufacturing Index tracks sentiment and activity in the services sector.

In September, the index posted 59.8. That’s the highest level since August 2009. 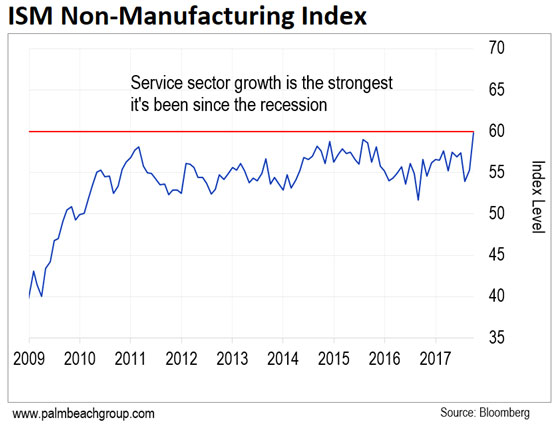 Economic growth is the strongest it’s been in over 10 years. That’s a sign the bull market will continue.