The S&P 500 and Nasdaq fell as much as 25% and 35% from their peaks. Crypto lost more than $1 trillion… and all during a period of 40-year record high inflation.

Two weeks into 2023, things aren’t much better… and even the so-called experts can’t agree on where things will go from here.

Now, I’m not suggesting you take their prognostications as gospel. They usually end up being just as clueless as everyone else.

But when you dig beneath the surface, you can gain some insight into where the market will go in any given year.

In other words, Fundstrat predicts the market will end the year 39% higher than BNP Paribas’ forecasts.

That’s the widest range of forecasted returns Bloomberg has received in 14 years. It’s also more than double the average forecasted range of 16% over the last decade.

This tells us that there’s an abnormal amount of uncertainty over the next 12 months.

So today, I’ll reveal two major conflicts behind this uncertainty… and how you can take advantage of it.

Two Drivers of Uncertainty in 2023

The two main drivers of this uncertainty have been ongoing since early 2022: The Fed vs. the Market and Company Earnings vs. Company Forecasts…

Since March 2022, the Fed has been hiking rates to rein in record-high inflation.

At the same time, investors bid-up stocks, betting the central bank would blink in the face of a slowing economy.

If the economy slowed, investors expected the Fed to cut or end its rate hikes, which would be good for stocks… So negative economic data became the market’s ammo.

This was highlighted perfectly last summer. 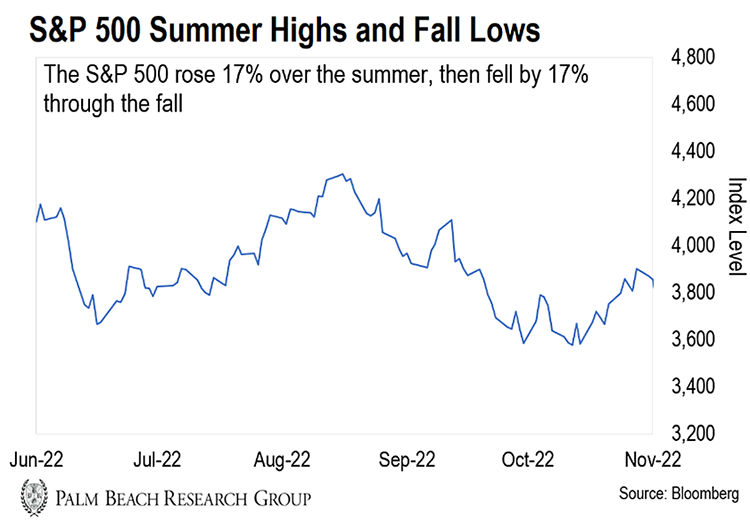 Through July and August, investors drove markets higher off rising beliefs that inflation was cooling and the Fed would soon slow its rate hikes.

They were correct about inflation. The Consumer Price Index (CPI), a benchmark for inflation, began to fall from its 9.1% peak in June.

However, the market completely misread the Fed, which issued rate hikes of 75 basis points in July, September, and November.

Today, the same battle is playing out again.

Last Wednesday, the Fed released the minutes from its December policy meeting. It showed Fed officials remain hawkish, with a laser focus on reining in inflation.

In other words, it won’t hesitate to raise rates higher and keep them there longer.

It remains to be seen whether that will cause a similar selloff again.

But it’s clear that fighting the Fed isn’t generally a winning formula… It can hike rates longer than many investors can remain solvent.

That brings us to our second major conflict…

Since mid-2022, companies have warned of a potential earnings downturn.

That omen is coming to fruition, as the earnings per share (EPS) of the S&P 500 dropped by 2% relative to the second quarter of 2022.

Over the past 10 recessions, earnings have fallen by 12% to as much as 92%. So there’s certainly more room for them to fall this year.

The fourth-quarter 2022 earnings season forecasts are a great example of that.

Over the past few weeks, a few dozen companies submitted early guidance ahead of the kickoff of the season.

Of those companies, 45% have provided estimates below analyst forecasts.

This raises the possibility that analyst earnings projections could set the market up for disappointment.

Look, I don’t know if the Fed will pivot or whether analyst or company forecasts will be more accurate in 2023.

But I know these two conflicts will continue to create market uncertainty.

That’s where our opportunity comes in…

How to Profit from 2023 Volatility

Here at PBRG, we use what we call the “Instant Cash Payout” strategy to take advantage of volatility.

Put options allow you to generate hundreds or even thousands of dollars quickly without buying a single stock.

Even better… elevated volatility increases the premiums you can earn on put options. That means you can earn higher returns and put less of your capital at risk.

Additionally, we only target the most elite businesses on the planet with our put options.

These are companies that generate huge cash flows… rake in big profits… have billions in the bank… pay steady streams of dividends to shareholders… and are cheap and underappreciated compared to the market and/or their peers.

So if you’re assigned shares, they’re from companies you’d love to own anyway at a price you’d consider a bargain.

Now, volatility has been relatively low since the start of the year. So the premiums on selling puts aren’t too juicy right now.

I believe that will change soon (for the reason I’ve laid out above). In the meantime, you can consider an alternative strategy to the Instant Cash Payout.

It involves selling “call” options against blue-chip stocks you already own. At PBRG, we call it an “Instant Cash Listing.”

This strategy works best if you think a stock will experience weakness in the near term.

By choosing a strike price slightly above a stock’s current trading price, you can earn up-front income… while potentially pocketing a gain should the stock rise by the time the call option expires.

If you consider selling call options, I strongly advise you to already own 100 shares of the stock per option contract before making any trade.

While many investors are feeling anxious over what the year holds, at PBRG we’re excited to continue finding opportunities to help you move the needle on your wealth.