Nick’s Note: Regular readers know that no one in the industry knows more about cryptocurrencies than our PBRG team. Today, my colleague Greg Wilson returns to share some big news in this space…

On November 18, 2004, the U.S. Securities and Exchange Commission (SEC) made a big announcement.

By the end of that year, the fund was worth $1.3 billion… Seven years later, it had become the world’s largest ETF…

Like other ETFs, GLD is a security that trades like a stock. The goal of the fund was to expose more people to gold ownership.

It was an immediate hit…

By the end of 2004, it had already accumulated $1.3 billion in assets. That was just the beginning.

In fact, the gold ETF became the world’s largest private owner of gold bullion in the world.

What’s interesting is that the majority of participants in the gold ETF had never bought gold before.

GLD’s success shows you the impact regulatory approval can have for an asset.

I’m telling you this because we’re seeing a similar situation play out in bitcoin. And just like GLD, it will send a flood of money and new investors into bitcoin.

I won’t bore you with the details. All you need to know is it’s extremely bullish for bitcoin.

The company getting the license is bitcoin exchange LedgerX.

Here’s why the news is so important…

Large institutions such as hedge funds have refrained from investing in bitcoin.

Now, that’s about to change.

There are two reasons for this.

First, they were afraid of trading a non-regulated asset. Now that LedgerX is approved by the CFTC, this hurdle is removed.

Second, they had no way to hedge risk. Portfolio managers lose their jobs when unhedged portfolios blow up. That’s why institutions hate unhedged risk.

With the pending launch of LedgerX, institutions will have an options market they can use to hedge their cryptocurrency positions.

And that will open the floodgates to enormous institutional investment.

How to Profit From the CFTC News

The simplest way to play this news is to buy bitcoin.

Buy bitcoin now so you can get ahead of the flood of institutional money coming to the market.

Nick’s Note: Today, we have a Chart Watch from my colleague Jeff Clark.

Oh, sure, we’ve seen intraday moves slightly above and below that range. But on a closing basis, the most widely followed stock market index in the world has moved less than 0.3% for more than two weeks.

This action—or lack of action—has worked off all the overbought and/or oversold conditions on the various technical indicators. And it’s allowed the index to build up energy for its next big move.

Today, I thought we’d take a few moments to try to figure out what is most likely to be the direction and the size of that next move. 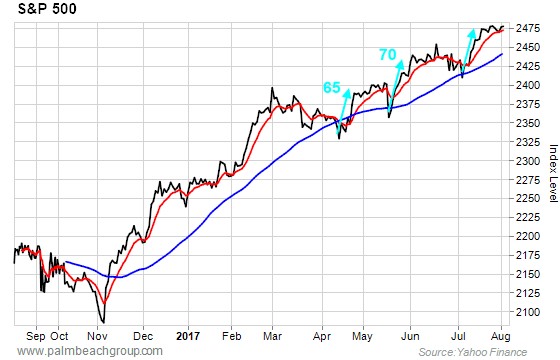 This is a bullish configuration.

The price action is strong, and it will remain that way until the S&P 500 closes below its 9-day EMA (2472-ish). So, for the moment, the path of least resistance is higher.

If we get something similar this time around, then the S&P 500 should bounce about 70 points off its July low of 2415—which gives us an upside target of 2485 or so for the current uptrend before the index comes back down to retest the 50-day MA… or chops around long enough to give the 50-day MA time to catch up to the current price.

In other words, the momentum favors the bulls, but the upside is somewhat limited from here…

If the bulls win the current tug o’ war with the S&P 500, then there’s probably 10 points or so of upside potential.

On the downside, if the bears win, then we could get a 30-point drop from here.