Founded in 1972, Sequoia Capital is one of the oldest venture capital (VC) firms around.

Sequoia even funded some of today’s most well-known companies before they became famous: Apple, Google, Instagram, Oracle, PayPal, Stripe, Yahoo, and YouTube.

And several of its investments have recorded massive returns:

Now, on the surface, Sequoia’s track record looks flawless. I wouldn’t blame you if you thought it had some type of crystal ball.

But here’s the thing… Top VC firms like Sequoia actually miss more often than they hit.

In fact, some have win rates of only 10%. That’s right: They’re striking out 90% of the time. Yet they’re still highly successful.

And today, I’ll show you how to apply this strategy to your own portfolio—plus tell you a unique way to get in on these types of deals…

Being a successful early-stage investor isn’t just about how many small bets you win or lose.

And that’s why VC firms look for early-stage companies with 10x potential upside or more. If they bag just one huge winner, it more than makes up for a string of losers.

The table below shows you how the math works…

So the key is finding trades with a great deal of upside and letting them run. These home runs will more than make up for the groundouts.

And as you can see in the chart below, the average VC fund has crushed the returns of public markets over the long term using this strategy… 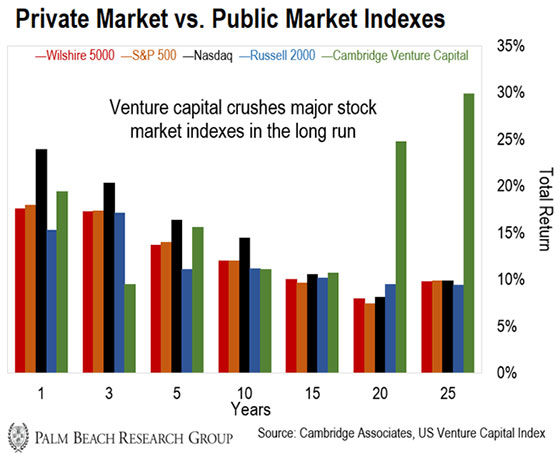 The big “exits” (when VC investors sell their investments) add up to big-time outperformance over time.

So VC investing is the perfect way to swing for the fences for investors craving outsized returns.

Their funds are restricted for “accredited” investors and large institutions. In other words, if you don’t have at least $1 million in net worth, you’re out of luck.

According to McKinsey & Company, private markets have over $5 trillion in assets under management.

And for years, the financial elite have walled off access to this secret playground from mom-and-pop investors like you. That’s because Wall Street wants to keep this pile of money for itself.

And over time, a Bank of America Merrill Lynch report predicts this “can limit [retail] investor returns and retirement savings.”

However, Daily editor Teeka Tiwari has been traveling North America for three months to find a way for Main Street to tap into this $5 trillion pool…

And he’s uncovered a “sweetheart deal” market that can make you 40 times your money. It’s a legal loophole allowing non-accredited investors to access private markets.

To be clear, this isn’t about cryptos, commodities, currency trading, or even options. In fact, you’ve probably never heard of it before. Wall Street has no incentive to share it with you.

Now, we can’t reveal too many details about this venture because it’s limited. But you can learn more about it right here…

And in the meantime, if you want to invest like venture capitalists, look for micro-cap companies with lots of growth potential and those working on real-world solutions. They’re the closest thing to early-stage private companies.

Since micro-caps are publicly traded, you can invest in them. But be sure to spread your investment dollars in a basket of early-stage companies. And treat them like speculations. So don’t bet more than you can afford to lose.

Finally, be prepared to fail. Remember, you won’t achieve success on 100% of your “VC-like” investments. You probably won’t win 75%—or even 50%—of the time, either.

But one major winner will more than make up for all the losers.

P.S. On Wednesday night, Teeka revealed his most powerful wealth-building secret. As mentioned, it’s one he’s used to see a small, $1,000 investment turn into as much as $1.6 million.

This “sweetheart deal” has the potential to return 10 times or more. And it’s open to Main Street investors.

You won’t want to miss it. So watch the replay of Teeka’s exclusive event right here.