In 1992, at age 27, Michael Dell became the youngest CEO of a company ranked in Fortune magazine’s list of the top 500 corporations.

In the mid-90s, Dell computers reported about $1 million in sales per day. By 2001, the company had become the largest computer maker in the world.

Today, Michael Dell has a net worth of about $31 billion. Forbes ranks him the 25th richest person in the world.

Michael Dell is one of the smartest entrepreneurs on the planet. When he makes moves, you should pay attention. And recently, he made a huge one…

According to The Wall Street Journal, it represents one of the biggest changes to the firm’s investing strategy in years.

Friends, this is just the beginning of what I believe will be a pre-IPO boom that could create more wealth than the IPO boom of the mid-90s.

I tipped you off to this trend early when in July 2019, I told you it was time to get into private markets. And I’ve been pounding the table since then.

As I predicted in July, we’re now seeing a tidal wave of money ready to come into this space. And billionaires like Michael Dell are lining up to gorge themselves on a feast of pre-IPO profits.

Today, I’ll show you why you need to act now, so you can take part in this budding bonanza of obscene pre-IPO profits…

According to capital market company Preqin, private equity firms are sitting on a record $1.5 trillion in cash. That’s more than double the dry powder they had five years ago. 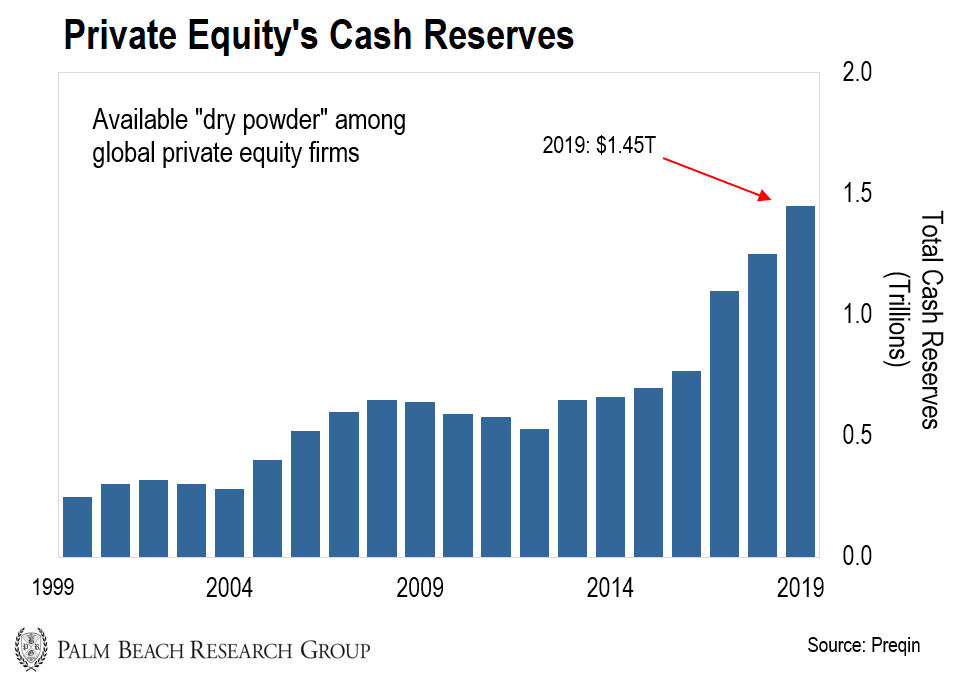 And they’re ready to burn through it. After we crunched the numbers, it’s easy to see why…

And the gap is only going to widen…

Research firm McKinsey & Company reports private equity investments have grown sevenfold since 2002… twice as fast as global public equities. And I expect that trend to continue.

You see, private firms don’t need public money anymore… except when they’re ready to dump their shares on ordinary investors.

Take Uber, for example. Insiders got pre-IPO shares for pennies. And when it went public last year with a valuation of $82 billion… they made out like bandits.

Some of them made gains as high as 64,200% on IPO day. Public investors? They haven’t made a dime off Uber yet.

The Biggest Boom in 25 Years

I recently flew 2,500 miles to attend an exclusive meeting at the home of one of the world’s top venture capitalists (VCs).

And what I discovered is something that you’re not hearing anywhere else.

Right now, VCs are prepping for a mega wave of new companies coming to market. That’s why I believe billionaires like Dell are shifting gears into private markets. They’re getting ready to milk the public again.

For example, during the 1990s tech boom, Silicon Valley firm Benchmark got pre-IPO shares of eBay for about 11 cents.

My contacts tell me VCs are seeing similar opportunities today in the emerging legal cannabis space.

Now, you might be thinking I’m crazy… but I want you to hear me out.

Despite getting clobbered last year, venture capitalists pumped a record $2 billion into cannabis startups in 2019. It’s the most money ever put into the sector by VCs before.

Wall Street would have you think otherwise with its negative headlines. But I’ve learned to watch what Wall Street does.… not what it says.

So while Main Street is avoiding cannabis out of fear… VCs are loading up. And when the cannabis IPO boom explodes, they’ll be laughing all the way to the bank.

Now, you could consider taking a small stake in one of the beaten-down cannabis exchange-traded funds like ETFMG Alternative Harvest ETF (MJ). They’ll do well when the space turns around.

But I don’t want you to be left with Wall Street’s table scraps.

To truly make windfall gains, you need to invest in private cannabis companies before they go public… like the VCs do.

And for the first time ever, I’ve found a way for you to be in on a pre-IPO deal with a billionaire… before it lists on the Nasdaq in 2020.

This is my No. 1 wealth-building opportunity of the year. And you just need a $250 stake to get in. But you must act soon. Space is limited. And this sweetheart deal (you can get shares for just 50 cents) closes forever at the end of the month.

P.S. Already, this company is drawing so much interest from heavy hitters… Global corporations are trying to acquire it before it goes public.

So don’t delay. Learn how you can get in on this deal for as little as $250 right here.