Then-CEO Satoru Iwata summed up Nintendo’s vision for the console perfectly when he explained:

The thing we’re thinking about most is not portable systems, consoles, and so forth… but that we want to get new people playing games.

And that was the genius behind the Wii. Nintendo designed it to be family-friendly.

To appeal to the casual market, Nintendo made the Wii simple, fun, and easy to play. The games weren’t violent or graphic. And the results spoke for themselves…

The new console met immediate success – selling over 101 million units since launching. Demand was so high, the Wii remained sold out more than a year and a half after its release.

Naturally, Nintendo’s stock rose 177% within a year of launching the Wii.

With all this success, you’d think Nintendo was set to dominate the casual gaming market of over 2 billion people for the foreseeable future.

But here’s where our story takes a strange turn…

After breaching 100 million sales in 2013, the Wii saw a mere 1 million in new unit sales over the next three years. Meanwhile, Sony released its PlayStation 4 that same year… and it quickly became the No. 1 selling console of the last decade.

What’s more, when it came time to release a new console, Nintendo switched gears completely and unveiled the Nintendo Switch in 2017.

The company designed the Switch primarily for single-player use… Games are more complex and some feature violent content and adult themes.

That left the lion’s share of the casual gaming segment wide open for family-friendly games. And the coronavirus pandemic has been a huge tailwind for this space…

COVID-19 Leads to a Surge in Sales

Longtime readers know Daily editor Teeka Tiwari and I travel the world to find the best moneymaking ideas for our readers. And we’ve redoubled our efforts during the coronavirus pandemic.

You see, Big T and I were pinpointing private companies with high growth potential before the coronavirus pandemic.

But through our research, we’ve found some are doing even better amid this crisis. 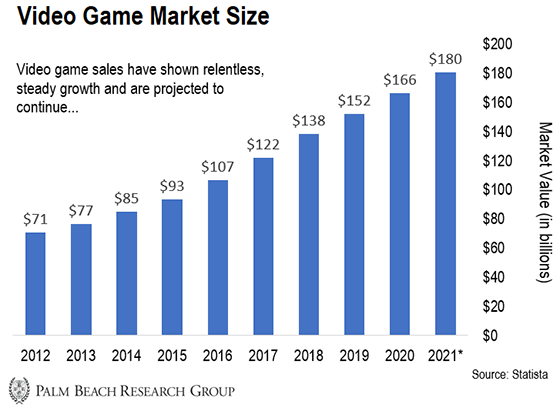 Now, the video game industry was already growing before the outbreak. But according to Forbes, it’s expected to reach $300 billion by 2025. That’s a nearly 100% increase from last year’s $152 billion.

And when you think about it, it’s not surprising. The outbreak has acted as a shot of adrenaline to the industry.

After all, with billions of people stuck at home, they’re looking for sources of entertainment. And video games fill that need.

According to telecom giant Verizon, video game usage is up around 75% since early March. And the industry just enjoyed its best April ever – with the U.S. market recording $1.5 billion in hardware and software sales.

Even after the pandemic recedes, gaming will continue to grow at double-digit clips (at least) each year.

To find the best gaming companies to invest in during this crisis, we make sure each company is meeting four criteria:

But you won’t find many companies that fit these criteria in the public markets. That’s why we continue to unearth them in the private markets.

Picking up Where Nintendo Left Off

Video games have been in a bull market since they launched in the late 1970s. And this trend shows no signs of letting up.

With COVID-19 forcing billions of people around the globe to “shelter in place,” this already hot sector has gone parabolic.

And Big T and I just found the ideal way to play this eruption. It’s an iconic, 41-year-old business that has reinvented itself. And it’s picking up where Nintendo left off by targeting billions of casual gamers.

Based on our research, we think this company can produce up to 10x potential returns over the next three to five years. (Palm Beach Venture subscribers can read all the details right here.)

And if you’re not a subscriber yet, consider the VanEck Vectors Video Gaming and eSports ETF (ESPO). It holds a solid portfolio of companies cashing in on the boom in the video game industry.

And now, you can cash in as well. But always remember to use rational position sizes, and don’t risk more than you can afford to lose.

P.S. Like I said, Big T and I have been pinpointing private companies with high growth potential before COVID-19… and the latest one we’ve found is thriving during the crisis…

As the industry goes parabolic during this pandemic, it’s reinvented itself to pick up right where Nintendo left off.

But this private company may be closing its doors to new investors soon. So you must act now. To learn more about how you can invest in deals like this, click here.