Nick’s Note: A new study from financial research firm DALBAR recently crossed my desk. It found that the average individual investor lost twice as much as the S&P 500 in 2018: While the market was down 4.4%, the ordinary Joe lost 9.4%. That’s striking underperformance…

And to find out the reason behind it, I reached out to our Wall Street insider, Jason Bodner—who spent years as a top trader for Wall Street firms like Cantor Fitzgerald.

Jason has experience beating the market at its own game. Right now, his Palm Beach Trader portfolio is up 22.5% since January 1. That bests the benchmark S&P 500, which is up only 14.4% since then. So what’s his secret? Read on to find out…

Jason: There are lots of reasons… But the main one is that the average investor isn’t buying all 500 stocks in the S&P 500—he’s only picking a few stocks to own. That makes it hard for him to mimic the overall performance of the market.

And on top of that, he’s also not picking the right stocks. I recently read a paper that found only 4% of stocks have been accounting for 100% of the gains of the stock market over the past 100 years. So to beat the market, you need to be one heck of a stock picker!

Now, I don’t know how each individual investor picks stocks… But I’d guess many buy shares in companies they’ve heard about in the news. The problem is: The media don’t talk about companies until they’ve already gone up quite a bit.

Take a look at the FAANG stocks—Facebook, Amazon, Apple, Netflix, and Google. They get a lot of attention because they’re huge companies that have created incredible products or services. And individual investors pile into these popular companies…

But they’re always late to the game. They rarely buy at the bottom or sell at the top.

Nick: Study after study proves that individual investors can’t beat the market on their own. Yet some of Wall Street’s best minds consistently do…

For example, Jim Simons of Renaissance Technologies had a fund that averaged nearly 72% returns over a 20-year period… Stanley Druckenmiller returned about 30% while running his fund in the 1980s and ’90s… And Warren Buffett averaged 21% returns during a 40-year period.

So what’s their secret?

Jason: I worked on Wall Street for years, and these guys watch the markets all day—it’s their job. They know as much as they possibly can about stocks. And they get information quicker—and act sooner—than ordinary investors.

On top of that, Wall Street guys have systems that tell them when to get in and out of positions. They know exactly what prices they’re buying and selling at.

And these systems work…

For example, my proprietary system scans nearly 5,500 U.S. stocks every day, looking for the best of the best that big institutions are buying up. These types of stocks can rise by double or triple digits in just a few weeks or months.

My system pulls more than 120 data points for each stock—including basics like volume, price, and fundamentals, along with more complex data. On average, it flags about 300 stocks per week that institutions are likely buying.

And I rank them from highest to lowest based on my proprietary algorithm. Then, I highlight the stocks with the highest probability of future price appreciation. Those are the ones I add to my Palm Beach Trader portfolio.

So it is possible to beat the market. You just have to have the right system and stock picker.

Nick: Do you have any advice for do-it-yourself stock pickers?

Jason: If you’re rich and well-connected, you could invest in a hedge fund. They traditionally outperform the market. However, expect to pay a 2% fee just for the privilege of letting them manage your money. And if they turn a profit for you, they’ll keep 20% of it, too.

But if you’re not rich and well-connected, you could just park your money in a low-cost index fund and forget about it.

The good thing about index funds is that they’re worry-free. On the negative side, though, you’ll pay fees and won’t ever beat the market…

There are periods when markets fall, while some great stocks keep going up. And if you’re in an index fund, you’ll miss out on that outperformance.

So for those wanting to put in a little work, find a trusted stock picker. Look for a guru you like, and stick with him.

Nick: Before we wrap up, what’s your stance on the markets right now?

Jason: I’m cautious in the very near term. My proprietary ratio is showing that the market is close to being overbought—it’s due for a breather.

That’s why last week, I recommended my subscribers take profits on a few stocks. We closed out Match Group and Etsy for gains of 33% and 54%, respectively, in nine months.

We also sold half of our position in The Trade Desk, which is up over 100% within our nine-month sweet spot. Now, we’re just playing with house money on that trade.

I do think that any dip in the market right now will be short-lived. But I’ll also say this: Because we’re so far along in this economic cycle, I think the stock market is about to become narrower.

In a bull market, the rising tide lifts all ships. But in a selective bull market—like the one we’re heading into—you have to identify the best companies.

So it’s even more important to have a great stock picker on your side now. Active investors will be rewarded going forward.

Nick: Thanks for your time, Jason. And congrats on the big winners.

Nick’s Note: For 16 years, Jason worked with some of the top firms on Wall Street, placing trades for the richest institutions in the world.

He used that experience to create a $250,00 database that flags when big money is flowing into certain stocks, pushing them higher and higher. The system has shown historical gains of 209%, 382%, and 262%—along with 114 additional winners.

From Dean R.: Nick, after reading your article on the “Robin Hood” tax plan, it seems to me that pounding the drum for dried-up liquidity is fear-mongering.

First, how did the markets work before high-frequency trading? They operated just fine. Secondly, as Jason Bodner stated in the essay, the tax is too small to change trading behavior; computer trading is here to stay. A 0.1% tax is fairly insignificant and may dry up some liquidity, but I don’t think it’ll affect the markets in any meaningful manner.

Lastly, I like to call out a lot of the articles I read coming from armrest politicians. You all talk a big game when it comes to shutting down proposed legislation, but don’t provide any real solutions, either. If you have the solution, why aren’t you running for office or trying to change things for the better—rather than simply capitalizing on the dysfunction?

A little-known mineral vital for protecting America’s communities is at risk of being cut off by foreign powers… So President Trump has issued an executive order to help secure the homegrown production of it.

Not only that, but obscure documents show that the Department of Energy is helping some companies in this mining space get up and running. And now, one analyst has identified three miners providing this special mineral that stand to profit. To find out all about them, click right here… 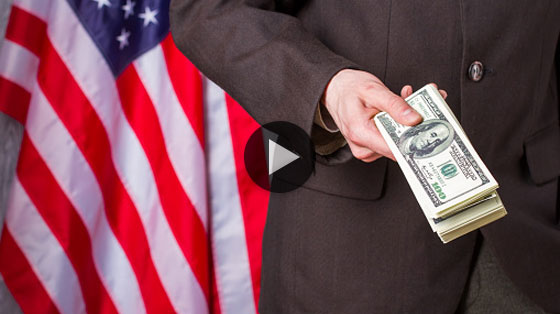