If you follow the news, the negative headlines are everywhere: a reignited trade war… rising tensions in the Middle East… and hostilities in Latin America. And they’re creating fear and uncertainty in the markets.

You see, fear sells… So these headlines attract most viewers—except you.

Our marketing research suggests Daily readers don’t respond to doomsday scenarios like those of other financial newsletters. That means you’re part of a sophisticated group of investors. I feel honored writing to you every day.

Look, I know it isn’t easy to put aside your fears and act rationally. For example, during the depths of the crypto bear market, many analysts once again declared bitcoin as dead. And unsavvy investors panic-sold in droves.

But world-renowned cryptocurrency expert Teeka Tiwari had already warned his readers that Crypto Winter was coming. The difference was, Teeka didn’t fear-monger.

Instead, he guided us through the storm and into a renewed “Crypto Spring.” Since its February lows, the crypto market is up 120%—making it the best-performing asset class year-to-date.

So if you stayed the course and doubled-down in April when Teeka said to, pat yourself on the back.

Now today, we’re seeing a similar fear grip the stock market. But we won’t go over the headlines.

Instead, we’re turning to our Wall Street insider Jason Bodner—who lays out three reasons you should ignore the noise and remain in stocks…

Reason No. 1: The Market’s Still Strong

If you’ve been following the Daily, then you know Jason developed a highly accurate stock-picking system after leaving Wall Street—where he was a partner at Cantor Fitzgerald for years.

It not only predicted the sell-off in February 2018 and the rally we saw at the start of this year… but even President Trump’s epic political upset in the 2016 election, too.

On Tuesday, Jason sent a market volatility update to his Palm Beach Trader subscribers. (PBT subscribers can read it right here.) And his system is saying the market is still fundamentally strong.

As you can see in the chart below, from May 6 to May 10, the market opened lower, but closed higher. Jason says that’s a sign of underlying strength. It means big institutions were buying into the weakness… 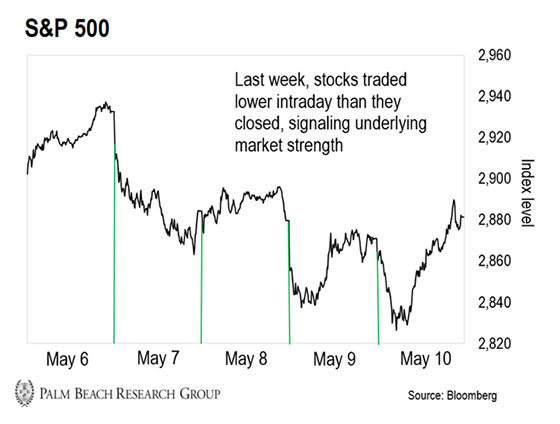 That brings us to reason No. 1: Stocks are still the best place to make money.

Dividends are taxed at 23.8% (long-term capital gains). Bond income is taxed as ordinary income, with the maximum federal rate at 40.8%.

That means if you’re a wealthy investor looking for income, you’d still do better owning stocks than bonds. The table below shows you’d end up with more money in your pocket with stocks at current yields…

So when it comes to paying taxes on your investments, stocks are clearly the better place to be.

Reason No. 2: Expect a Big Bounce

Jason cited a study by Bespoke Research. It found that since the bull market started in March 2009, there have been 15 Mondays in which the SPDR S&P 500 ETF (SPY) fell 2% or more.

And Jason’s system found strikingly similar results. Remember, it tracks institutional buying versus selling. The higher the ratio is, the more buying there is. The lower it is, the more selling there is.

Since 2012, the markets were overbought with a ratio of 80% before falling below 60% on 12 occasions. Going from 80% (heavily overbought) to 60% (more balanced) requires a decent amount of selling—which is what we’re seeing now.

Below is a table of those 12 times. “Retreat From High” shows how far SPY fell from its closing peak. Just like now, there have been market sell-offs pushing the ratio below 60%.

And look at the one- to six-week returns after the ratio falls to 60%: They’re very strong. So while we’re not quite at 60% yet on the ratio, Jason says we’ll get there any day now.

What does all this mean? Well, Jason says these dips are buying opportunities…

Reason No. 3: U.S. Companies Are Strong

Finally, Jason says the U.S. economy is much more robust than the headlines suggest.

According to FactSet, for this quarter:

Plus, companies crushed their earnings expectations again… And that’s a bullish sign for the market going forward.

What to Do Now?

I know this sell-off is unsettling, but times like these are really diamonds in the rough. The media will blow things out of proportion to strike fear into the hearts of whoever is watching. That’s how they make money.

But don’t buy into the fear. Look at the data… It says the U.S. has the strongest economy with the best companies. We’ll see more corporate buybacks. And owning stocks is more attractive than bonds. Period.

The bottom line: Don’t let the bears bring you down.

P.S. As usual, Jason’s system is spot-on. Since Monday’s sell-off, the market has rebounded over 2.5%. Stay the course.

And did Jason’s or Teeka’s advice keep you from panic-selling? Tell us how our gurus are helping you become a better investor right here…

From Thomas M.: If I could, I’d amend the Constitution with a law banning politicians from running for president. Only successful, knowledgeable businessmen should be able to run for president. Look at the fantastic accomplishments Trump has made for the working people of America.

From Paul L.: Yes, I doubled-down on bitcoin. Now, I’m enjoying the fruits—and trying to get my boss to do so as well. Since he’s seen the amazing profits in such a short time, it seems like he can’t buy enough.

From Al R.: I finally invested in crypto… only to realize that I’d put my money in another token instead of bitcoin. It was a stupid mistake, but I let it ride. This happened back in February, and I watched it go up by quite a bit. I did eventually invest in bitcoin, too. And I’m super happy about it, though I wish I’d punched more.

For the past 36 years, master trader Jeff Clark has helped people retire wealthy—but not in a usual way.

In fact, his trading strategy probably seems risky—or even reckless. But it’s also unlike anything you’ve probably seen before.

And on Wednesday, May 22, he’s holding a free special event to reveal his never-before-released trading strategy blueprint—and a year of his guidance. To reserve your spot to attend, just go right here. 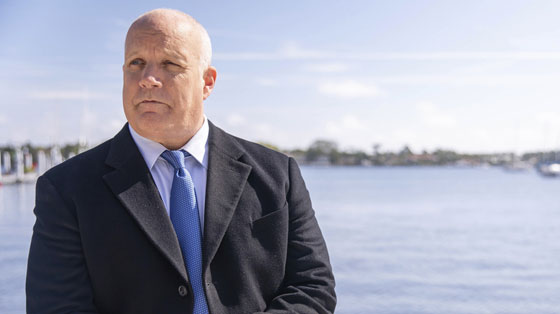