Nick’s Note: While the mainstream media is panicking about volatility in the cryptocurrency market, it’s missing out on one of the biggest trends in finance. My colleague Greg Wilson has the scoop below. You won’t read about this anywhere else…

Every young finance prodigy has one thing in mind when they get to Goldman Sachs: Move up the career ladder.

It’s not an easy task.

Long work hours are the norm… often, 14 hours per day. Former employees have said they’re lucky to have three hours a day to themselves.

In fact, Goldman Sachs employees work so much that in 2013, the company banned workers from entering its offices on Saturdays.

To make managing director or partner, you’re looking at a minimum 12-year commitment—often much longer.

But people do it for a reason.

There’s the prestige of working at one of the top financial firms in the world.

There are perks like traveling the world… getting your name printed in prestigious publications… and being the envy of your peers.

Of course, there’s the money. The average Goldman Sachs employee makes over $300,000 per year. And the higher up the ladder you go, the more you can expect to make.

For most, it’s a once-in-a-lifetime opportunity… and a place to spend their entire career.

But as I’ll show you, the prestige and money don’t keep executives from leaving—especially when a better “once-in-a-lifetime” opportunity comes along.

Off to Greener Pastures

That’s what makes the case of Chris Matta so intriguing.

He got his start at Goldman Sachs in 2011 as a summer intern. Then he spent three years as a business intelligence analyst before moving on to manage over $7 billion in assets for the Goldman Sachs Philanthropy Fund.

His hard work paid off this past December when he got promoted to vice president.

That’s where the story gets interesting. Just two days after his promotion, he jumped ship.

Now, you should ask yourself, “Why would someone like him jump ship at such a time?”

He already put in nearly seven years. He had an excellent position. And he had just been promoted.

Well, he happened to find another once-in-a-lifetime opportunity. And in his words, he took a “calculated risk.”

A Better Door Has Opened

As you might have guessed by now, Matta’s new opportunity was in the cryptocurrency and blockchain space.

In 2017 alone, the crypto space grew from less than $20 billion to over $800 billion at its height, a 40-fold increase before its current pullback.

That growth has drawn the attention of the traditional finance world, including Wall Street executives like Matta.

In fact, while the mainstream media has been droning on about the cryptocurrency price action, we told you about Wall Street’s financial exodus.

These guys and gals aren’t just leaving to make a quick buck. They see the potential of cryptocurrency and blockchain. And they want to get in on the next once-in-a-lifetime opportunity.

The great news is that you can still profit from this trend.

Act Now to Get Ahead of Wall Street

Over the course of 2018, we’ve seen the cryptocurrency market take a breather. After reaching $20,000 in January 2018, bitcoin has lost as much as 70%. And the overall crypto market has mirrored that performance.

But this shouldn’t be unexpected. We’ve always said that the cryptocurrency market will be very volatile. And we need to use that volatility to our advantage.

Behind the scenes, traditional finance continues to pour more money into cryptocurrency. And as I’ve shown you before and now today, movers and shakers from Wall Street are migrating to cryptocurrency as well.

It’s a signal to us that the opportunity in cryptocurrency is far from over. Big gains are ahead for those that act now.

Use the current breather in the cryptocurrency market to buy this dip.

P.S. Over the past year, crypto critics (including George Soros, JPMorgan, Goldman Sachs, and Bloomberg) have called bitcoin “a fraud,” “a bubble,” and “a Ponzi scheme.” Yet, they’ve just begun investing millions in cryptocurrencies.

And as I mentioned above—despite the negative news you hear about cryptocurrencies—there’s an exodus of executives from Wall Street to the crypto space.

We know it’s all confusing… That’s why Palm Beach Confidential editor and world-renowned crypto expert Teeka Tiwari is holding a free live broadcast on July 19 to uncover what he calls “The Great Crypto Conspiracy of 2018.”

During the broadcast, Teeka will tell you what world leaders, regulators, banking officials, technologists, and crypto experts are saying behind closed doors at private meetings… and why it means you could make serious money in the weeks to come…

Believe it or not, if you act on this information, you could see even bigger gains than people who bought in 2017.

You can register for this free event right here…

His “early detection” system looks for unusual institutional (UI) buying—from pension funds to billionaire investors. Only a handful of stocks trigger his buy signal. Today, his system is signaling the health care sector…

In the June 18 Daily, I told you to keep biotech stocks on your radar—specifically the SPDR S&P Biotech ETF (XBI).

My data continues to suggest buying is happening in biotech… and the health care sector overall.

The Health Care Select Sector SPDR ETF (XLV) best represents this action. XLV is made up of 35% pharmaceutical names and 20% biotech names.

As you can see in the chart below, XLV is breaking above its March highs. 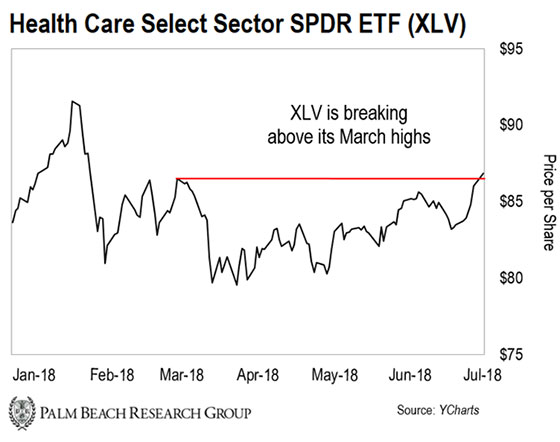 The day-to-day movements of the market oftentimes is just noise. It’s basically just money sloshing from one stock to the next.

What catches my attention is when many stocks in the same sector show the same buying activity out of nowhere. This signals a potential rotation into the sector. And I want to be part of that.

We saw this earlier this year with energy stocks…

We don’t want to miss a potential move like this in the health care sector.

From Tim W.: Hey, Nick. It’s your pizza guy from south Chicago. I think you’re on to something. I’m going to save this edition and throw a few bucks at your recommendations. I’ll check back with you in October. You’re always welcome back to the Windy City for pizza and beer.

Nick’s Reply: Thanks, Tim. Hope all is well in Chicago. Remember, investors who do buy now should keep their position sizes small. The trade war is likely to get worse before it gets better… Also, I’ll have more ways to play it soon. So stay tuned.

The political divide in America continues to grip Daily readers…

From Jimmy C.: This is a reply to the comment from John H. on breaking the U.S. into independent districts (July 10 Mailbag). We extinguished that idea more than a century ago… It cost 700,000 American lives to decide it.

From Alex V.: I’m concerned that one-third of U.S. citizens thinks another Civil War is possible. Really! If we had fair press coverage—and the left and right were equally boisterous—I don’t think you would come to that conclusion.

From Omar A.: Thanks, Teeka. Great essay on another possible Civil War in America—with valuable information. Great to have you on our side.

From Brandon T.: You continue to miss the monetary mark. China didn’t choose to devalue its currency… Rather, the market and ongoing dollar short forced China to expand the range at which its commercial banks can bid for dollars. This may look like devaluation, but it’s a symptom of a global monetary system that’s irrevocably broken.

Concerned about a potential Civil War in America or a global trade war? Sends us your questions or comments right here…