The key to making big money, is following the big money.

They manage trillions of dollars… and can afford an army of analysts to uncover hidden gems. So when they start betting big on a stock… they can lift prices higher and higher.

The good news is you don’t need to pay an elite hedge fund to find the next winning stock. If you know what to look for, you can just track their moves and ride along for big profits.

Fortunately for you, I’ve spent nearly a decade and hundreds of thousands of dollars to build a system to do just that.

You see, huge investors move money around every single day. But most people have no clue what the big boys are doing until it shows up on CNBC. By then, it’s too late. The major moves have already been made.

The real trick is spotting big boys before they surface. That’s exactly what my system does. And today, I’ll show you where it says they’re headed right now…

I spent nearly two decades as a Wall Street trader at firms such as Cantor Fitzgerald. In fact, I was one of only a handful of people in the world who could trade $1 billion or more for big financial institutions.

I had a front-row seat and saw how big money really works… in real time and in ways almost no one else could.

Now, these whale investors can’t buy stocks the way we do. They need someone on the inside to set everything up for them… to line up sellers when they want to buy millions of shares.

They’re great at hiding their tracks; but they always leave clues. And only someone like me who was on the inside can detect them.

That knowledge allowed me to design a stock-picking system that identifies the best stocks the big money is buying.

It scans 5,500 stocks every day, using algorithms to rank each one for strength. It also looks for the signs of big-money investors. And when it sees them moving in or out of a stock, it raises a yellow flag. 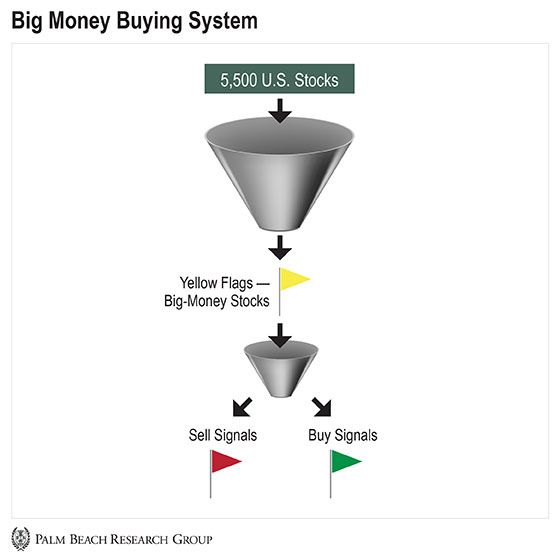 It’s that simple: When I see green, the big money is buying. So where is my system saying it’s headed next?

This Industry Is Flashing Green

My system is showing big buying recently in the semiconductor space. These companies make chips for all sorts of electronic devices.

The chart below shows the VanEck Vectors Semiconductor ETF (SMH). It holds 25 of the top semi stocks. The green bars show when big buying is starting. As you can see, when big money buys… it’s off to the races. 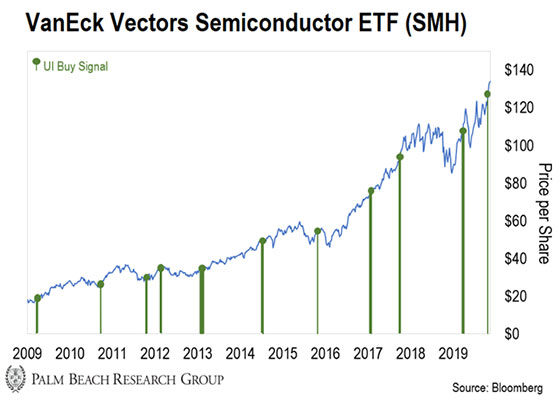 I looked through my data to find when semi buying was more than 1.5 times what I normally see in the space. And I only saw buying like this 10 times in the past decade.

In fact, all 10 of these big buying events resulted in gains over the following year. The average gain was 22.4%.

As you can see in the table above, my system flagged big buying on November 6. It means buying in semis just picked up again in a big way.

If you want to follow the big-money wave, consider adding SMH to your portfolio. As always, do your homework before making any investment.

Remember: The key to making big money, is following the big money.

P.S. As I mentioned above, finding the best stocks is a matter of finding out where big investors are putting their money.

That’s because massive institutional money drives the market. They can swallow up to 4.9999% of any publicly owned company in America from the tiniest microcap to a behemoth.

My system can predict this buying activity 24 hours to 10 days in advance. If you want to learn how you can gain access to my system, click here for the full details.