Nick’s Note: Palm Beach Income chief analyst William Mikula is our stealth-income-producing machine. His options service has a 100% win-rate this year. Today, he shares his favorite way to profit when Wall Street panics…

Which one did we profit from? The one that crashed.

The buyout announcement had the opposite effect on national grocery chain Kroger.

Wall Street promptly hit the “sell” button on Kroger and other supermarkets after the Amazon buyout offer went public.

That’s because Amazon has a reputation for ruthlessly cutting prices. Investors fear that if Amazon enters the brick-and-mortar grocery space, a brutal price war will ensue.

I don’t disagree with this line of thinking. If Amazon is successful in its bid, let the battle begin.

But here’s why I’m telling you this story…

Wall Street overreacted on this news.

You see, Kroger is still generating billions in cash profits. But based on every proprietary indicator I use, it was brutally oversold after the announcement.

Today, I’ll show you how we used this classic Wall Street Overreaction to make 16.7% annualized gains on Kroger… and how you can make similar trades.

How to Buy Elite Companies for Cheap

Imagine you could make a lowball offer on a stock that you’d love to own… at prices you set beforehand. This strategy is called selling put options.

When you sell a put option, you earn cash upfront simply for agreeing to buy shares in a company at a discount.

Investors buy your lowball offers because it provides them “insurance.” They know they’ll have a buyer for their shares no matter what happens.

This insurance is especially profitable when investors are panicking. And this tends to be the case with Wall Street Overreactions.

Since launching our Palm Beach Income service in 2012, we’ve taken advantage of 34 Wall Street Overreactions. All 34 trades closed as winners. And we averaged 19.3% annualized returns.

As you can see, trading these overreactions can be a lucrative—and safe—strategy. But the key is to sell puts only on profitable, shareholder-friendly companies that dominate their industries.

Now, let me show you one of my favorite ways to spot these profitable trade setups. 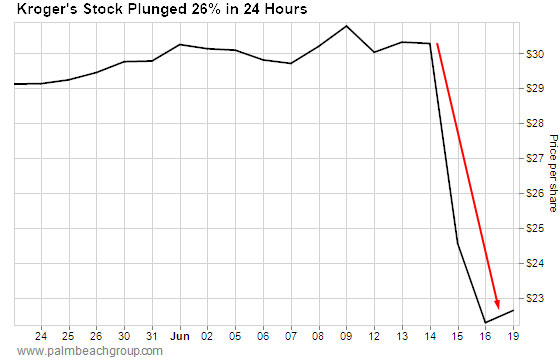 It shows what happened to Kroger’s stock right after Amazon’s announcement.

As you can see, there’s a rapid drop followed by a sharp, angled rise. I call this the “hockey stick” formation.

This “hockey stick” forms when a stock suffers a violent, quick sell-off, then bounces off its lows.

Clearheaded investors (like us) can then walk over to the safe, crack it open, and, if we like what we see inside, make our lowball offer.

This allows us to earn thick streams of cash. Then, we can close our trade after the panic subsides and normalcy returns to the stock.

This is exactly what we did with our trade on Kroger.

On August 8, we closed this trade for a 16.7% annualized return. A great result considering the mainstream narrative was to run from the supermarket giant.

Now, since I only recommend trades on the strongest, most dominant companies on the planet—trading at cheap valuations—these charts are relatively rare.

But as you can see from our overall track record—and our most recent trade on Kroger—hockey stick patterns can be very profitable if traded correctly.

There are two companies on my radar right now with the potential to form hockey sticks: Teva Pharmaceuticals (TEVA) and Qualcomm (QCOM).

These are not formal recommendations… But both look interesting enough for further research.

And moving forward, pay special attention each quarter during earnings season. This tends to be fertile “hockey stick” ground as Wall Street reacts (and overreacts) to companies’ earnings announcements.

Option selling isn’t for everyone, but if you take the time to learn how to do it the right way, you can set up a second income stream for life. And hockey stick patterns can be a lucrative part of that income stream.

P.S. If you have questions about Wall Street Overreactions or hockey stick formations, you can email us right here.

As a wave of violence sweeps America, a reclusive millionaire reveals who’s behind it…and how to protect yourself. 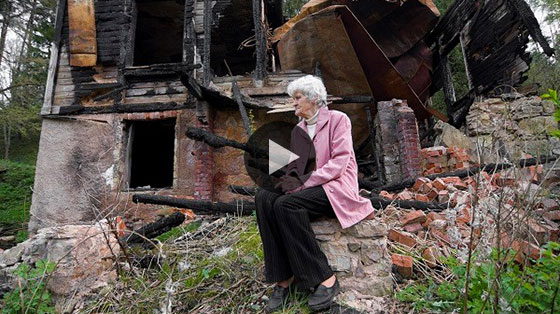